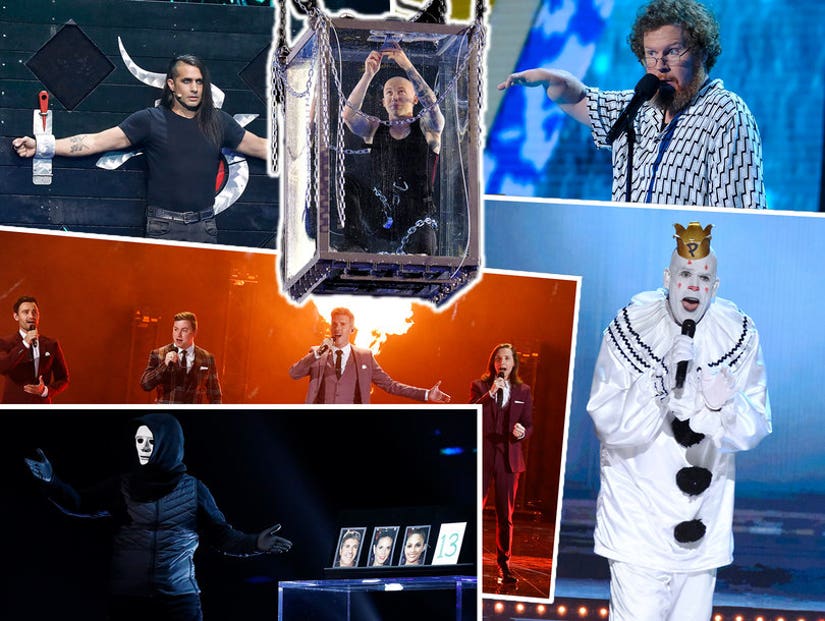 In a first, Simon stole Howie's moment for an act that only he seemed to really get -- and he likes them more than almost any "Got Talent" act that's ever hit the stage!

Tonight, it was Howie Mandel's turn to man the golden buzzer on "America's Got Talent: The Champions." At least, that is, until Simon Cowell decided to steal it from him.

There are advantages to being the boss.

It was something we'd never seen before on "AGT." After it went down, Terry Crews asked Heidi Klum if she loved the act as much as Simon -- who was giddy throughout their performance -- and Howie interjected, "No one does."

He may be right, as Alesha Dixon concurred that she'd never seen Simon love an act as much as this one ... enough to steal someone else's golden buzzer!

Luckily, the night was filled with other acts that were absolutely fantastic, including some recent "AGT" favorites like Ryan Niemiller and Luke Islam. There was danger, magic, and one of the most incredible vocalists to ever hit any stage.

And poor Howie, after having his buzzer stolen, found two more acts in the show that he would have loved to hit that button for. Luckily, America had his back.

And just for fun, I'm gonna rank them from worst to first to see who emerges as my Top 4 each week.

(danger) From "Britain's Got Talent" in 2016, where he screwed up his act in the semifinals, costing his chance at the finals, Ben came to "Champions" to not only redeem his shot at the title, but to re-perform the exact act that went wrong last time. He even brought Alesha up again (as he had the first time) to help him out. We're not sure if this was supposed to be filled with so many mishaps and mistakes, but its stopped being fun about halfway through and we weren't mad he got buzzed off.

(dancers) After a third place finish on "BGT" in 2016 (and Simon's golden buzzer there), these dancing Stormtroopers crossed the pond with a mission. Weirdly enough, though Simon absolutely loves this act, they're just a pretty standard -- albeit fun -- dance troupe that just happens to dance in modified Stormtrooper outfits. There were no amazing dance tricks or stunts, or even visual formations. We have no idea why he felt the need to steal Howie's golden buzzer for this act, but he did.

(singers) This group had only been together a month when they began their "BGT" journey in 2014, and they wound up winning that season by subverting boy band expectations with their song selections. The performance was technically sound and pitch perfect, but it also felt empty and lacked any surprise or memorable elements. From kicking off their careers with "Les Miz" to "Shallow" is not the way to make your mark in the states.

(magician) Marc was a golden buzzer recipient of "BGT" who fell just short of the finals, who then returned as the anonymous "X," who did make it to the finals ... and still fell just short of the title. Without spoiling his act tonight, which fell a little short of spectacular, his ending twist was a brilliant twist. That said, it was something we kind of feel like we saw when it happened -- and suspected it would -- but still Marc and Magician X are a lot of fun to watch and the other part of his act was a fun twist, if a little awkwardly executed.

(escape artist) The youngest escape artist in the world when he hit the "AGT" stage in 2012. After performing with Criss Angel on a stunt where he blacked out and went to the ER, Spencer decided to reprise that stunt here, and this time it worked. There wasn't all that much fake dramatics, though he did push it to the last second, and it was overall an impressive escape from a truly deadly situation a couple of different ways. Was it enough to carry on? Probably not, but it was fun to watch.

(singer) One of the more unique "AGT" acts, Puddles has a pretty solid career already doing his unique mix of clown mime and singing. It just wasn't strong enough last time he hit the live shows. His is such a singular vision, but he absolutely pulled us into it tonight with a powerful and emotionally wrought take on "I Want to Know What Love Is." We loved the more theatrical arrangement that suited his style and personality beautifully. And his vocal confidence has absolutely soared since last he was on this stage.

(singer) An "AGT" semi-finalist this past summer, Broadway singer Luke promised to switch it up this time. Tackling Celine Dion, Luke certainly brings that same level of drama to his performances, though there were parts it felt the song wasn't doing him any favors against such stiff competition. His voice is still incredibly strong and polished for a 12-year-old kid, but this is the stage where you must blow the voters away so they can't stop thinking about you. Luke didn't do that.

(comedian) Ryan had to settle for third place this past summer, but had one of the strongest runs for a comic in "Got Talent" history. He was funny then and he's funny now, but what was even more remarkable is how much more calm and confident he was. It helps sell the comedy when the comedian is settled into their act in a way that you feel how chill they are about everything. This wasn't his funniest set ever, but it was still rock solid material and he's just so damned likable. It was here that Howie wished he still had his golden buzzer, and Ryan is certainly worthy.

(mentalist) A third place "AGT" finisher back in 2015, Oz really pulled out all the stops with an incredible performance here tonight. He was charismatic, he kept things moving and he did absolutely amazing things with numbers -- from adding dates to tying it together with the serial number of a dollar bill and even a flipped word. It was truly mind-boggling in the best possible way and the kind of act you'd pay very good money to see. Oz is the real deal as an entertainer in this field.

(singer) Like Adaline Bates (minus the ridiculous costume), Marcelito performs both parts of a male-female duet. His act won "Philippines Got Talent" in 2011, so he was hoping his unique vocal talent could break through in America, too..Another big difference between him and Adaline was that his voice was absolute butter in both parts. He threw the audience by starting in the higher octave, but his lower register is full-throated and gorgeous. Both parts blended seamlessly, and even with just one of them he'd be amazing. This was truly a memorable performance and a great start to the night.

After Simon totally wasted Howie's golden buzzer, we're left with only three slots on a night that definitely had more than three great performances.

Based on our above rankings, we're advancing singer Marcello Pornoy, mentalist Oz Pearlman and comedian Ryan Niemiller, but if we're totally honest, we have zero faith that the superfans lined up with us.

They were ecstatic about Luke Islam, and Spencer Horsman certainly had their attention. They also seemed to be fans of the career Puddles Pity Party has established in recent years, and if we're honest, we'd be okay with any of the six advancing.

While it was great to see reigning champ Shin Lim again, we don't think Marc Spellman did enough, and the rest of the acts were big misfires in our book.

Obviously, Boogie Storm moved on thanks to Simon, joining Hans as the most unexpected advancing acts so far. But what did America say?

The first group Terry brought forward included Marcelito Pornoy, Collabro and Puddles Pity Party, and we were feeling pretty good about our top pick of the night. Apparently, so was America as Marcelito Pornoy took that first audience-voted spot.

Next, Ben Blaque was joined by Marc Spellman and Oz Pearlman, and we wondered if the Shin Lim proximity would push Marc ahead. As it turns out, that's exactly what happened as *Marc Spellman" advanced.

That left Spencer Horsman, Luke Islam and Ryan Niemiller. All three were in our rankings of contenders, and it turns out they came in 3rd, 4th, and 5th with the superfans, too. This season, the judges fill the final spot (which is how we wound up with Hans).

This week, Simon threw his vote to Ryan, followed by Alesha and Heidi. We know Howie Mandel would have voted that way, so it was a clean sweep for Ryan Niemiller who continues his shot at redemption.

The fun continues on "America's Got Talent: The Champions" every Monday night at 8 p.m. ET on NBC. 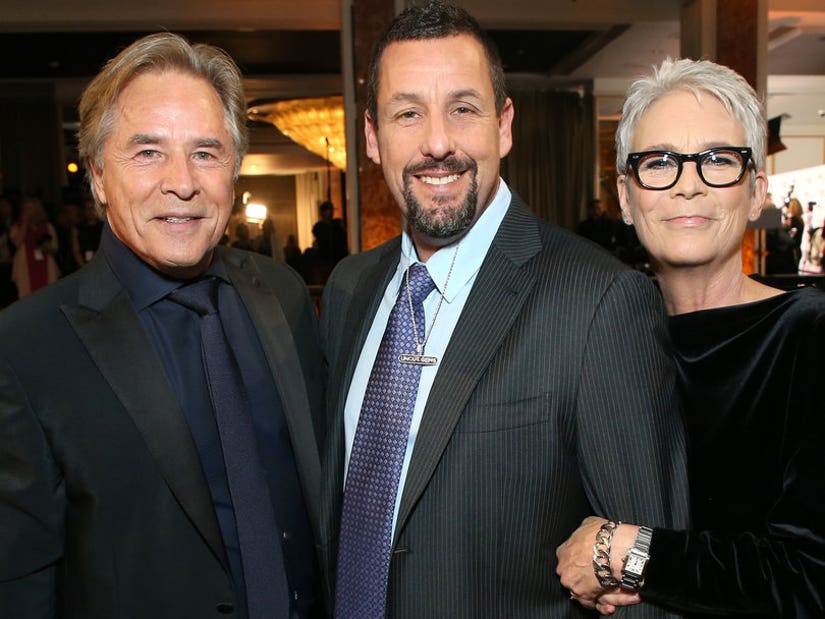