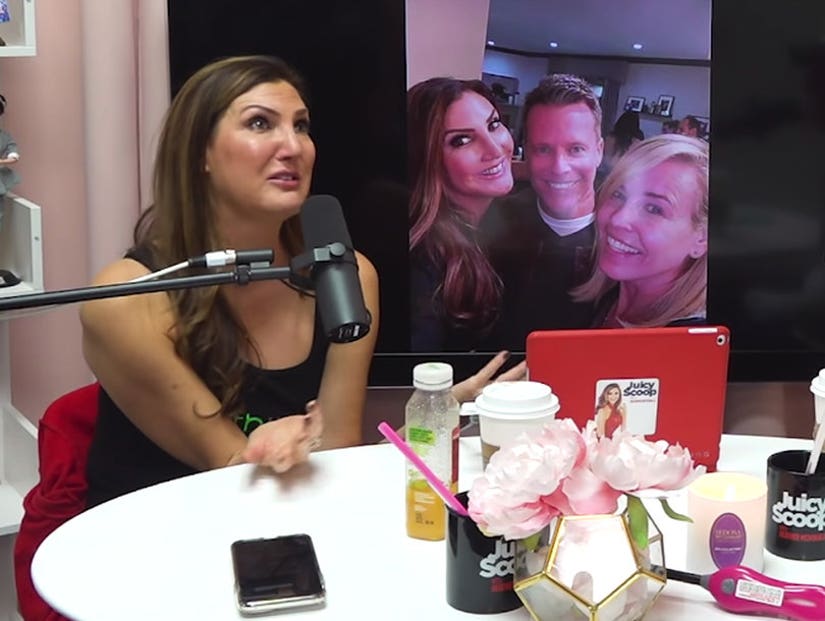 Heather gets emotional speaking about her former boss and reveals the one thing she still wants to say to her.

Chuy Bravo's memorial brought Chelsea Handler and Heather McDonald together again, following a mini-feud that played out in the press back in 2016.

The two worked together on E!'s "Chelsea Lately," on which Handler starred and McDonald wrote, from 2007-2014 -- until Handler walked away from the network that same year when her contract ended.

The perceived beef between the two began two years later, after McDonald did an interview about the show's end with Theo Von and Matthew Cole Weiss' Allegedly podcast. During the chat, she said she "100% lived in fear" while on the show and learned it wouldn't be renewed on Twitter.

While McDonald later said she meant she lived in fear of the show's cancelation, not Handler herself, Chelsea hit back hard during an appearance on Howard Stern -- where she claimed Heather "was trading stories to Us Weekly about my personal life in exchange for having her pictures run in the magazine."

So, yeah, it got intense for a minute there.

On Sunday night, the cast and crew of "Chelsea Lately," as well as Bravo's friends and family, reunited for a memorial service. While some of the guests weren't sure Handler would show up, she arrived about 20 minutes after McDonald.

"She was just her 2010, delightful self," said Heather on her Juicy Scoop podcast Tuesday. "Smiling, hugging everybody. I was like, ... 'Am I going to get a hug?' I hugged her right back, 'How's your family.' It's great, it's a new year, it's a new decade, it was a great time."

The two sat next to each other as the guests took turns sharing stories about Chuy, something Heather called "surreal." She added, "It was just like back in the day, exactly. The way she would tell a story and I would remind her of something and she would add to it, she would touch my hand, it was really cool. I'm happy, I'm really happy about it."

Heather said the two did have a conversation, where she got to ask Handler something she'd been dying to for quite some time. "I said, 'Do you remember when you'd say any woman doing standup over 40 was gross?" McDonald relayed, saying she herself was a standup comedian over 40 when Handler first said it and pointing out how Chelsea had returned to standup since.

Handler apparently copped to her past remarks immediately, saying she started doing standup again because she felt she has "something to say" now. When podcast guest Chris Fanjola asked McDonald if that was the response she was looking for, McDonald said it was, feeling it came from an "honest" place.

Franjola also said he thought Heather was trying "to prod" Chelsea by asking about her recent video wearing Kim Kardashian's Skims shapewear. Noting that "Chelsea Lately" had an odd relationship with the Kardashians because both shows were on E!, McDonald found it "interesting" to see how chummy the family and Handler were now. Chelsea allegedly told Heather she did it because one of Kim's best friends, Allison Statter, is the daughter of Handler's manager, Irving Azoff.

Heather said she "felt satisfied" and "spiritually full" by the conversation, but admitted she would still love to have a more serious chat about what she calls their "miscommunication" if Chelsea ever asked her out to lunch.

"There are things I would say. I do still want to talk about, 'Did you ever listen to the entire podcast, I did not say bad shit about you,'" she explained. "There was misinformation and she was pissed and really hurt by it. My intention was never to hurt her feelings and her feelings were really hurt when she went on the attack on Howard Stern about me."

"I should have called her right away, like, 'Wait a minute, I know we haven't talked, but this is a miscommunication' ... immediately do a video, put it on Facebook, contact the person and clear it up," she said, adding she actually had an explanation ready to go but was talked out of posting it at the time.

McDonald then claimed there was "a lot of residual career fallout" because of the controversy and said she "couldn't even be on Khloe Kardashian's cocktail show because she had booked Chelsea and she was afraid Chelsea would be pissed off if I was booked." Noting this wasn't any fault of Chelsea's, she felt it was more a case of, "Let's not piss off the more powerful person."

"I really want her to know it was such a misunderstanding and who put it in her ear," Heather added. "I feel like someone put that in her ear that I was selling stories to tabloids, I don't think she made it up herself."

Heather said the controversy did lead to good things, however, and really pushed her to work harder on her podcast because it was her only option. "I think I would have gotten other little writing jobs, I'd be a writer on a show and I wouldn't be where I am today, which is a better place," she said of her no regrets outlook.

She then got very emotional after Franjola asked how it felt, overall, seeing Handler again. "I wouldn't have cared this much for this many years if she wasn't a huge significant part of my life," she said, tearing up. "I loved those years of my life. If someone was to say what was the happiest time of my life, I would still probably say those years."

She added, "95% of my days at Chelsea were completely happy, joyful times."