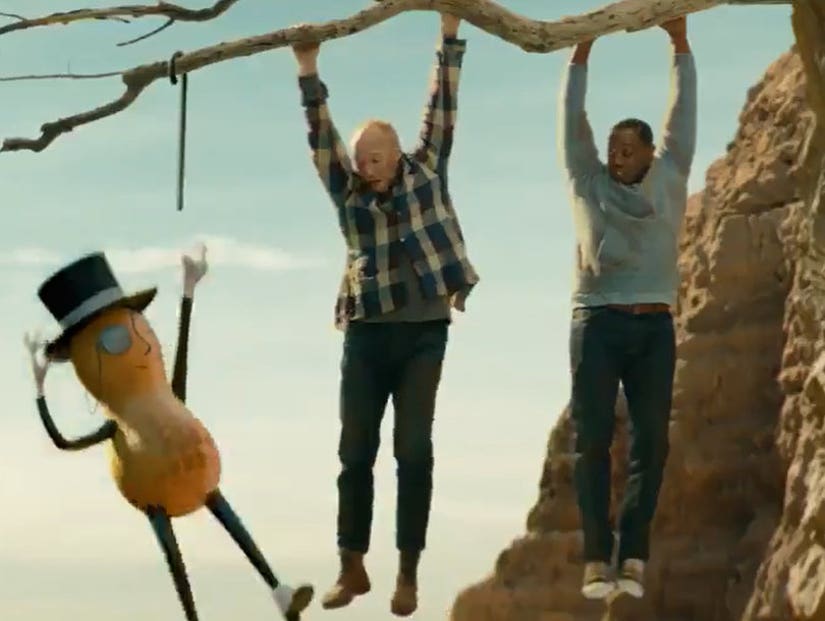 Planters Peanuts has killed off its mascot, Mr. Peanut.

The company revealed the heartbreaking news on Twitter Wednesday morning, sending the social media site into a tailspin as fans reacted with shock, sadness and, of course, memes.

"It is with heavy hearts that we confirm that Mr. Peanut has died at 104," tweeted the official Mr. Peanut account. "In the ultimate selfless act, he sacrificed himself to save his friends when they needed him most. Please pay your respects with #RIPeanut"

It is with heavy hearts that we confirm that Mr. Peanut has died at 104. In the ultimate selfless act, he sacrificed himself to save his friends when they needed him most. Please pay your respects with #RIPeanut pic.twitter.com/VFnEFod4Zp

The brand later shared footage of the icon's final moments -- a Mr. Peanut snuff film, as it were -- showing the animated character's sacrifice.

After a devastating NUTmobile crash, Mr. Peanut, Wesley Snipes and "Veep" star Matt Walsh find themselves suspended over a ravine on a branch -- one in danger of breaking.

To save his friends, Mr. Peanut lets go and plunges to his death.

"MR. PEANUT was more than just a friend – he was a hero. His passing has shook me to my core," said Matt Walsh in a statement. "I'll do my best to honor his legacy and be there for my friends like he was always there for me even until our last wild ride together. I'll pay my last respects during his funeral on Super Bowl Sunday. I encourage our entire nation to do the same."

Yes, this is all part of Planters' Super Bowl campaign, which will culminate in a funeral to be aired during the third quarter of the big game.

The Super Bowl airs Sunday, February 2 on Fox. See some of the best reactions below:

Mr. Clean is lamenting the death of Mr. Peanut and now I'm not sure what's real anymore. I just need Mr. Coffee to tell me things are going to be all right. #RIPeanut https://t.co/TyqMXMWxpZ

We, too, would sacrifice it all for the nut #RIPeanut (a real one).

all the people with a nut allergy when they heard the mr. peanut yeeted himself #RIPeanut pic.twitter.com/jAmmuFcEp1

Photographic EVIDENCE that Mr. Peanut is ALIVE and living in Cuba! Wake up sheeple! #RIPeanut pic.twitter.com/dJ8DuA3F4p

Time to pour one out for my boy #RIPeanut pic.twitter.com/AePZPdeVao