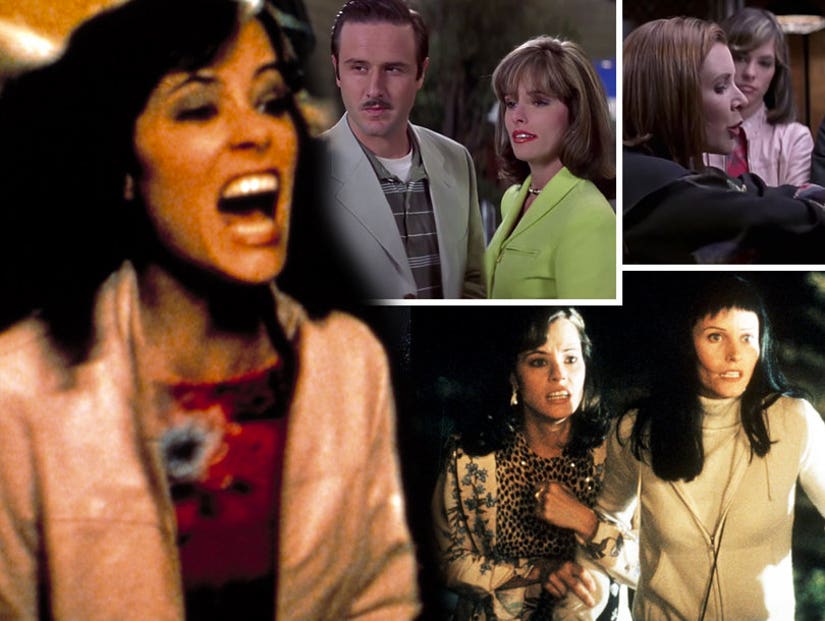 No matter how you feel about the third film, one thing's for sure: Posey killed it.

Ghostface may have taken her out, but Parker Posey's Jennifer Jolie -- born Judy Jergenstern -- lives on as one of the "Scream" franchise's best characters.

The already-meta series went above and beyond in "Scream 3," which found the masked serial killer picking off actors involved in the making of "Stab 3," a movie inspired by the events of the previous films. Posey's character was the actress playing the on-screen version of Gale Weathers, Courteney Cox's ruthless reporter.

When the movie premiered 20 years ago today, Posey's work in the film was hailed as one of its highlights, despite the sequel having a harder time with critics and fans. So, in celebration of its milestone anniversary, who better to talk to about it than Posey herself, right?

"First of all, I'm glad to hear she's beloved online," Posey enthusiastically began in an interview conducted with TooFab via e-mail. "I think the fans like the part because I was funny and irreverent. And also, getting to see Gale doubled by an actress playing her added layers to the enjoyment of the last of the trilogy."

Noting that horror movies "are a lot darker and scarier today," the actress recalled seeing the first movie at a theater in Chelsea, New York when it came out. "It sounds crazy now, but the wit of the horror genre was a first of its kind," she said, "the creators were on the level of the audience that was ready for these kinds of movies."

As he did with the rest of the series, the late, great Wes Craven directed the third film, with Posey calling him "both kind and intelligent." Up until this point in her career, Posey had mainly been an indie movie queen, with roles in celebrated films including "The House of Yes," "Waiting for Guffman," "Party Girl" and "Dazed and Confused."

"I respected him very much," she said of Wes. "I was nervous to take on a part where I'd have to be scared and on the run. I'd been out of the country for over a year and landed in Hollywood to hopefully get a paying job -- and I did. So I was happy to fit into the studio system. We talked about why people wanted to scream together in an audience -- what the films held a place for -- that catharsis. Audiences would scream and then laugh together."

She said the two also talked about why these characters, hers in particular, wouldn't just make a run for it. "How dissociated is Jennifer Jolie to allow herself to be a third wheel? I needed to make sense of it," she explained. "So, she's an actress getting carried away with the part and unable to let go of it. I saw her as an archetypal fool, refusing or unable to grasp reality and instead enter into it by animating it -- spontaneously riding the chaos instead of waking up and going somewhere safe. Like when I jumped into my security guard's arms -- fleeing but no place to really go. She keeps running scared." 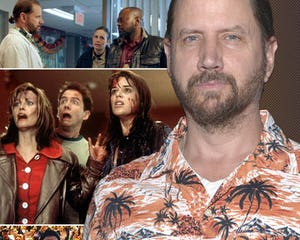 The moment she referenced, where a helpless Jolie jumps into Patrick Warburton's arms at the end of a scene, is one of the many alternate takes Posey did during filming. In the commentary for the third film, Craven explained how much the crew loved being on set when it was her turn to shoot something, as she surprised them at every turn with different lines or reactions that had them cracking up.

"Before shooting my death scene, Wes came up to me to make sure I was going to play it seriously," she added. "I said yes, of course, and I was indeed scared. I didn't want to die. I was relieved it ended quickly, with just two takes. Our stunt guy, behind the mask, was supportive and sensitive to my fear."

While it clearly wasn't something she was looking forward to filming, she does love the idea behind the death. In the film, her character finds herself hiding within the walls of a Hollywood mansion, only to be killed behind a two-way mirror as Gale and Dewey searched for her on the other side. "That she dies behind the two-way mirror (they can't see her but she can see them) was a brilliant and poetic way for her to get caught and go," said Posey. "She wasn't adept to being in reality!"

Few moments in the Scream series are as absurd or deliciously entertaining as the one where the real Gale Weathers (Courteney Cox) and Jennifer investigate the hidden connection between Sidney's mom and the movie studio. It's a true Scooby Doo setup, with amazing banter made all the better thanks to a cameo from Carrie Fisher. While the two Gales note the woman looks like Princess Leia, Fisher's Bianca Burnette quips, "The one who [slept] with George Lucas" got the role.

"Oh my God -- Carrie Fisher!" exclaimed Posey when the legendary actress was brought up. "I remember that day because I was so excited she was there, had read her books and had been to her house a few times. Whenever an actor (on a big budget movie) is about to show up for work, the 2nd AD asks if there's anything you'd like in your trailer. So when I knocked on her door and she answered, there were a few boxes of Fruit Loops and a carton of Marlboro Lights."

Noting she simply "enjoyed being around" Fisher, Posey said the actress' "brain was on fire and she was a great storyteller." She added Fisher would "talk about her mother and father -- she was so funny. I remember admiring how fun and inclusive her narcissism was -- she was so entertaining and generous. No filter and completely herself. I laughed the whole time we shot that scene." 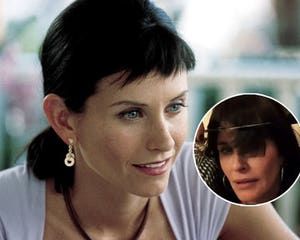 The scene perfectly encapsulates the relationship between both Weathers and Jolie as well, as they toss barbs at each other without care, while also working together to save their hides.

"I loved playing with Courtney," recalled Posey, who had actually met Cox on the set of "Friends" while she and Lisa Kudrow were working on the movie "Clockwatchers" together. She had also worked with David Arquette's father on "Waiting for Guffman," so she said "hanging out with them at work and acting with them was super simpatico."

As for a favorite moment with the two of them, she pointed to the scene after Jennifer's Hollywood Hills house blew up. "The night I rolled down the hill and I land there on the pavement ... Courtney and David come running up (or they're already there, I don't remember) but Courtney has to punch me," she recalled. "It was 4:00 in the morning. I had a feeling she'd really punch me and she did! I didn't see stars or anything but it was enough for me to go 'ow'—and of course, we all thought it was funny."

Posey said she hasn't revisited the film since its release and "barely watched it the first time," noting that she "stood in the back of the theater close to the exit door" at the premiere. "It was fun to hear the response and the energy of the audience," she recalled.

Since it's been so long, don't even try to have her decipher the plot of movie-within-a-movie "Stab 3," which somehow revolved around Sidney returning to Woodsboro, flashbacks and Gale being the killer. "Stab 3? Oh, right. This was the movie within the movie. Like I said, I don't remember," she told TooFab. "It was 20 years ago!"

It wouldn't be a "Scream 3" conversation without bringing up Cox's infamous blunt bangs, so we just had to end our Q&A with this: "What did you honestly think of them in the moment?"

"I liked her bangs!" she exclaimed. "They framed her face with sharp edges. As much as I like to talk about hair, I have to go now. Happy 20th, Scream! Take care."

Posey can currently be seen on "Lost In Space" on Netflix. 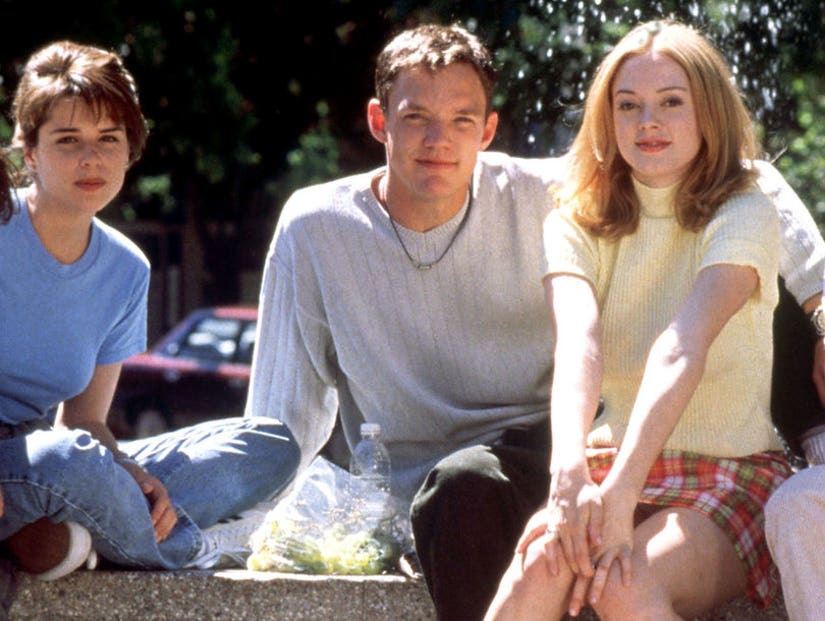