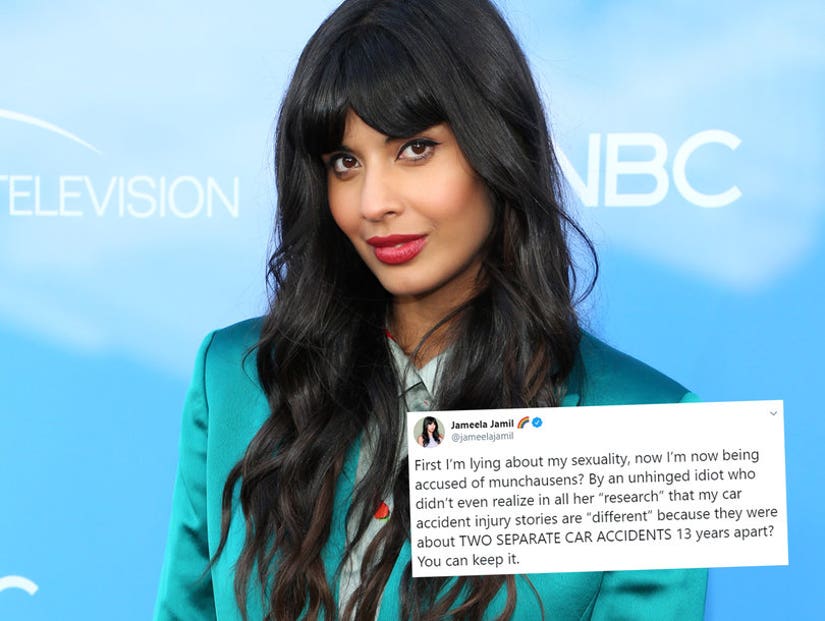 A viral Twitter thread accused the actress of faking her ailments, including broken bones, food allergies and cancer.

Jameela Jamil found herself in a Twitter battle after someone claimed she had Munchausen Syndrome.

The "Good Place" star defended herself after an Instagram Story thread by writer and producer Tracie Egan Morrissey went viral on Tuesday, theorizing Jamil was faking her past mental and physical ailments in order to seek attention.

Morrissey pointed out what she believed were discrepancies in Jamil's stories of bee swarm attacks, car accidents, broken bones, cancer and modeling among others.

According to the Cleveland Clinic, Munchausen syndrome, now called factitious disorder, "is a type of mental illness in which a person repeatedly acts as if he or she has a physical or mental disorder when, in truth, he or she has caused the symptoms. Munchausen syndrome is a mental illness associated with severe emotional difficulties." It should be noted that Morrissey is by her own admission not a medical professional and is unqualified to make diagnoses. Additionally, the specific accusations made by Morrissey, whether true or false, do not fit the diagnosis of Munchausen syndrome.

First I'm lying about my sexuality, now I'm now being accused of munchausens? By an unhinged idiot who didn't even realize in all her “research” that my car accident injury stories are “different” because they were about TWO SEPARATE CAR ACCIDENTS 13 years apart? You can keep it. pic.twitter.com/KPuHbiyyhT

"First I'm lying about my sexuality, now I'm now being accused of munchausens?" Jamil wrote on Twitter, referencing her coming out as queer recently. "By an unhinged idiot who didn't even realize in all her 'research' that my car accident injury stories are 'different' because they were about TWO SEPARATE CAR ACCIDENTS 13 years apart? You can keep it."

Jamil then spent hours on the social media platform clarifying each of Morrissey's accusations.

In regards to questions about her surviving cancer twice, the actress wrote, "1 was a breast cancer scare at 28. The actual cancer was cervical cancer. Which is extremely common and scary. Next question D--khead?"

Man, if as many people spent their time and energy helping others/fighting injustice as they do dragging and slandering people on the internet the world would be in such good shape. @BreneBrown wrote this beautiful sentence that gives me strength. pic.twitter.com/xG0mvUIeGX

Her food allergies were highlighted by Morrissey reposting Jamil's Instagram of her enjoying peanut butter pretzels, to which Jamil tweeted, "Mercury poisoning in my twenties. Had 11 fillings removed and my stomach lining was damaged for a decade. Got loads of weird food allergies that cleared up as I healed my gut."

Jamil explained how she was able to continue shooting a production after claiming she suffered a broken tooth, nose and elbow by writing, "Have you ever heard of adrenaline? I was able to keep filming for an hour after the accident. I didn't know at the time I was concussed. I was in shock. I felt no pain. And stuck my tooth in with adhesive. I still have the cracked tooth. I never replaced it. Next question."

She also defended her assertion of an inherited disorder that causes stretchy skin, bruising and joint issues.

2/2 Oil tycoon destroying the planet, or a serial sex offender I would maybe understand this vitriol and effort to target and harass me. But I'm just a mental health/eating disorder advocate actually taking the time to change public policy and legislation to protect kids. 🤷🏽‍♀️

After attempting to shoot down Morrissey's accusations point-by-point, Jamil eventually wrapped up her counter tweets.

"Not afraid of you or your dumb internet conspiracy theories. Keep them coming. You just add to my relevance. I'm gonna keep helping people with eating disorders, and changing laws and global policies to protect kids and their mental health and there's NOTHING you can do about it."

She even seemed to have fun with all the online conspiracy theories about her as she jokingly took them to the extreme on the social media platform.

Not afraid of you or your dumb internet conspiracy theories. Keep them coming. You just add to my relevance. I'm gonna keep helping people with eating disorders, and changing laws and global policies to protect kids and their mental health and there's NOTHING you can do about it. pic.twitter.com/PttrCvifew

"Now that I have made it to crazy rumor level fame. Let's start more: I'm not actually south Asian. It's all Bobbi Brown bronzer. Also my I have a tattoo of my own tits on my forehead, and that's why I always have a fringe. Also, I'm BANKSY," she posted.

"Also Tupac and Biggie both live in my house and style me for events. And Putin comes round our house for Poker night. And 'you're so vain' was really about ME. And... I am single handedly causing climate change with my farts. Also I'm American. And this is my real body."

Morrissey, for her part, has since clarified her non-official diagnosis of Munchausen, claiming instead Jamil suffers from Somatic Symptom Disorder instead, which "is characterized by an extreme focus on physical symptoms -- such as pain or fatigue -- that causes major emotional distress and problems functioning," according to the Mayo Clinic. Again, Morrissey is not a medical professional, but claims she is just a "nosy lady."