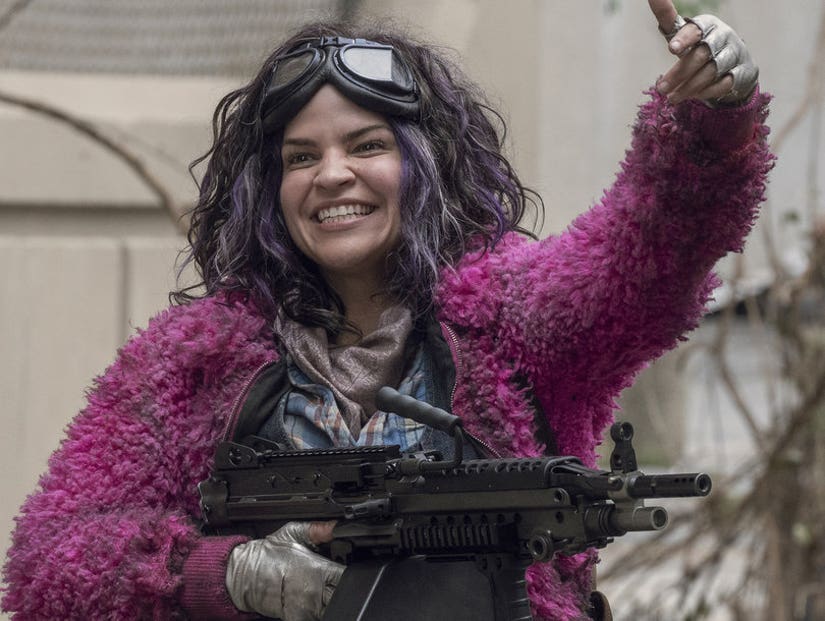 Paola Lazaro reveals how she can relate to her character and spills on adding to the show's Latina representation.

One week after making her first appearance on "The Walking Dead," new cast member Paola Lazaro finally introduced herself as Juanita Sanchez -- better known as Princess -- on Sunday night.

The off-beat character is torn straight from the tail-end of the comics, bringing some much-needed levity to the series as she and the other survivors head into uncharted territory.

When Eugene, Yumiko and Ezekiel meet her, she's been on her own for a year. She's so starved for connection, she isn't sure the trio are even real. She's also spent all her free time arranging walkers into everyday scenarios -- a la Will Smith's mannequins in "I Am Legend."

Rocking purple hair, a bright pink fur coat and goggles, her look is distinctive and ripped from the source material. Speaking with TooFab, Lazaro revealed how she prepared to take on the fan favorite role, teased what's to come in the season finale -- which will air later this year due to production delays from the coronavirus pandemic -- and shared how the fans have already embraced her.

Read the full Q&A below.

How familiar were you with both the comics and the show before becoming a part of it?

I'm a writer and an actor, so most of the time I'm either acting or writing. So when I have downtime I like to just read the Dalai Lama, be with my family or friends and try to have nothing to do with the business, just so I can keep sane in a way. So I don't really watch much. Now, I started watching more TV but I hadn't seen it. I mean, I knew about the show and that it was great and people love it.

So what I did when I got the audition is I spent like two weeks just watching all ten seasons. And every time I watched an episode, I would just get more and more excited, more and more pumped. I was like, 'It's so good, so good, I want this role, it's so good!' And then when I saw Princess in the comic books, I just flipped out. That just sealed the deal for me. I was like, 'Oh, my God, I'm gonna work so hard for this.'

From what we've seen so far, you've done a great job of bringing her to life. Can you talk a little bit about trying to get into that mindset of someone who has been alone for over a year?

For me, it wasn't that hard because when I was a kid, I used to get in trouble a lot, so I used to get kicked out of Girl Scout meetings all the time and different activities because of my energy levels and all this stuff. It wasn't that hard to get into it. I was like, 'Oh, I've been there. I get it.' It just hits home so hard that it just melds beautifully in my brain.

What was the reaction on set when everyone finally saw you in costume for the first time? Her look is ripped directly from the comics.

Oh my god, it was awesome. I was just so excited. I was just walking around, feeling the clothes and just getting into the character. And everybody was pumped in the props department and the costume designer, all of the people who had anything to do with the looks of the character really wanted to stick to the comics. We were all on the same page about sticking to the comic book and really doing it justice. And I think we did and I think we were all excited when we saw that we did.

Did you get to do any weapons or fight training to prepare for this?

Yes, I did. It was crazy. I had never shot a gun before. So for me, it was like, 'Oh god, this is crazy.' It's just very safe. They are very serious. It's a very serious environment. And you have to learn many skills for safety. I just learned a lot and felt really safe with them. For me, it was really helpful.

When you are coming into a show that has been on for so many years, the cast is tight-knit already, it's a well-established show -- what is that like for you?

At first, of course, you get a little nervous and you're like how am I going to fit into this world that's been established for so long. But once I got there and people were so welcoming to me, it was not even a question anymore, not a doubt, they welcomed me with open arms. Literally. Literally.

Have you been keeping an eye on the fan reaction? Have people been reaching out to you on social media more now that Princess has made her debut?

And how does it feel to kind of be taking on that responsibility, being a face for the Latin American community?

It does feel great. I'm just glad I'm able to respond and to be there and do my messages in Spanish and English, do my posts in Spanish and English. I'm learning Brazilian Portuguese, I respond to the Brazilian fans in Portuguese because I've been learning. It's just very exciting and they've just been so kind and I'm just glad that I can respond and be there for them.

Did anyone in the cast or crew give you any advice about the fans? It's a popular show and they're a large group.

They would tell me, like, 'Oh, the fans are hardcore.' And I was like, 'OK.' But I didn't know the level of it. But so far, it's been great. Especially during this time, when we were all at home keeping safe, to be able to communicate with each other and to be excited about something together, to be excited about the show together, has been a gift. I look forward to meeting more of them and being there for them.

This is the last episode until the finale airs later this year, after its delay. What is something you are able to tease about the final episode to get us excited about how the season will end?

All I can say is that it really leaves us something to look forward to. As fans of the show, it really excites us and leaves something for us to be like, 'Yeah! I can't wait!'

Right now Princess is with Eugene, Yumiko and Ezekiel, but who would you really love to see her interact with next season?

"The Walking Dead" season finale will air later this year, date yet to be announced.