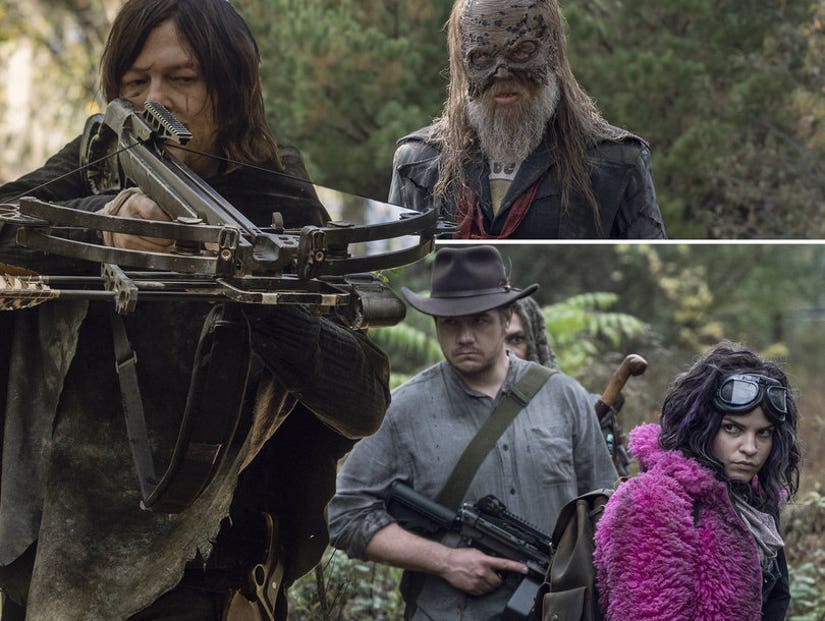 The Whisperer War isn't over yet ... and probably won't be for a few months now.

When "The Walking Dead" announced it wouldn't air the Season 10 finale until later this year due to delays caused by the coronavirus, we knew there would a few threads left dangling from the penultimate episode -- but tonight's cliffhanger was a wild one!

As of now, no return date has been set for the final episode, which will air as a special sometime before Season 11 begins. According to show runner Angela Kang, they were "very close" to being done with the finale, but there are a few post-production tweaks they just can't make until everything is up and running again.

With that being said, let's break down each of the big storylines this week, starting with the one that brought the episode to its intense ending.

While he may wear half of Alpha's face as his mask, Beta made it clear he does not want an upgrade when it comes to his name -- nearly killing a woman who called him "Alpha" by mistake.

Now at the helm of the Whisperers and a giant new zombie horde, Beta walked them straight to Alexandria, only to find it completely abandoned. Thankfully, our survivors were smart and high-tailed it to a nearby hospital before Beta could seek retribution for Alpha's beheading, leaving only Aaron and Alden behind in hiding to keep tabs on the bad guys.

In a creepy new development, Beta is now hearing voices, voices which somehow tell him where the survivors are actually hiding. After his group changed direction and headed toward the hospital, they discovered both Aaron and Alden and took them captive. Right now, we have no idea what happened to them.

The episode ended with Beta, listening to intel from inside his head, showing up outside the hospital with an insane amount of backup behind him. It's a frightening last shot and one that really doesn't make things look too promising for everyone holed up inside. The big question left unanswered until the finale finally airs: how can they possibly fight themselves out of this without a miracle?

Both Daryl and Negan were teamed up with younger, female counterparts this week, offering up advice and a shoulder to cry on (or punch) following the exits of both Alpha and Michonne.

For Daryl, he spent the episode with Judith, who wanted to learn how to walk the perimeter and keep everyone safe like her crossbow-wielding mentor. They came across a Whisperer who defected from the group, saying Beta had "lost it" after Alpha's death. With no information to trade, Daryl shot her in the head, claiming it was a more merciful death than letting her bleed out. Judith felt a little salty they just left her body there, however, and got emotional as she pled her case.

"What if you were lost and no one could find you, or RJ was or mom," she said, tearing up as she said, "I just want us to be back together again, home, that's all." As she told him that Michonne was on an adventure helping others and looking for Rick, she said she feared he would leave her too. He comforted her by saying all the other survivors were her family and telling her that "nothing can take the place of someone you love being gone, but that doesn't mean everything that follows is going to break your heart."

On Negan's end of things, he was dealing with Lydia, who was having complicated feelings about the death of her mother, Alpha. Yes, she did horrible, horrible things but, as Negan told Lydia, "she was still your mom." She didn't want to show her grief though, until it became too consuming not to. She eventually broke down in Negan's arms, as he hugged her close to console her.

It'll be interesting to see whether Negan and Lydia will continue to buddy up as the show continues.

With Connie still missing, her best friend Kelly and Carol needed to hash things out.

The two went out on a run together, where Carol apologized for being responsible for the cave collapse and said she wished she could take back what happened. Kelly, however, was confident Connie was okay. She then told Carol how Connie felt being deaf was her "superpower," before showing forgiveness.

"I heard the stories about you in the old days, you'd just go off and do the thing only you can do. Lone wolf. That's your superpower," she then told Carol. "You can't give up everything about yourself because bad things happen."

After her brief appearance last week, we finally got a proper introduction to Princess, a zany character from the comic books who finally made her TV debut.

Princess, real name Juanita Sanchez, explained that she didn't want to call herself Queen because the term would "make me sound old and pretentious." Revealing she has been on her own for over a year now, she even questioned whether Eugene, Yumiko and Ezekiel were even real.

Ezekiel won her over by complimenting the walker "displays" she set up around town, before she accidentally scared off their horses by firing her gun at some zombies. Miko was skeptical about trusting Princess' assistance, but was overruled by the other two in her group, so they all set off together to find some new wheels.

Along the way, Princess accidentally (maybe not?) walked them all through a minefield -- again, not endearing her to Yumiko at all -- before they all realized she gave them the runaround and took them on the longest route possible to get to a barn full of bikes.

They were pissed, but she had a good reason: she was having fun, wanted them all to be friends with her and worried they would leave her behind once they got what they needed. She really won Eugene over when she revealed that life wasn't much different for her before the zombie apocalypse, as she recalled being on her own a lot and being told "you're hard to love." Yeah, Eugene's been there.

That must have touched Miko's heart too, as she invited Princess on their quest to find Stephanie, the woman on the other end of the radio.

Again, we'll have to wait until that finale to finally air to see what Stephanie's deal is, though all signs point to The Commonwealth -- an advanced society from the comics resembling the pre-zombie world -- being the real cliffhanger of the season.

See you all whenever the finale airs. Until then, stay safe!