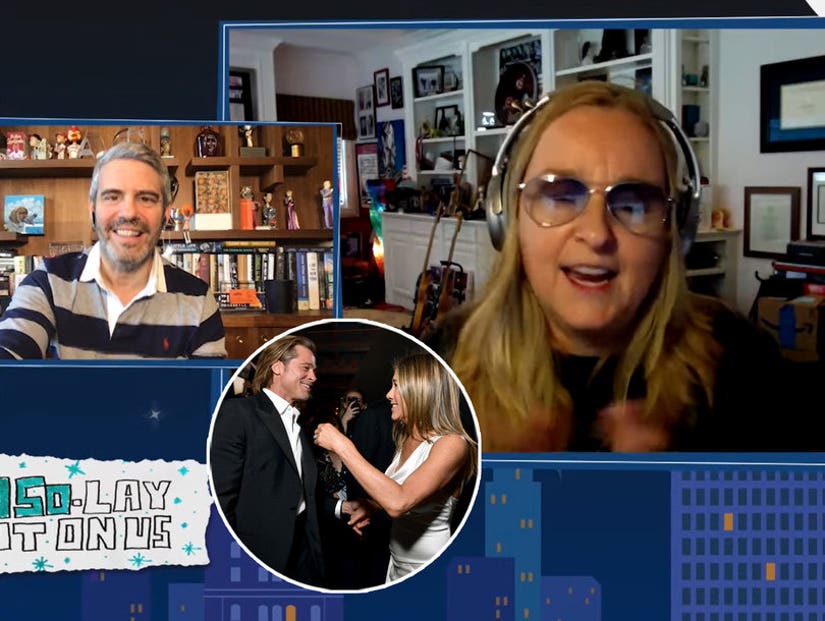 Etheridge, once one of Brad's closest friends and a performer at his wedding to Jennifer Aniston, probably knew what she was in for coming into the show, but clearly hoped she could avoid talking about Angelina Jolie.

In 2016, she spoke about Brad's divorce from Angelina on Andy Cohen's radio show, only to claim days later on "WWHL" that Jolie's PR team took issue with what she said. Last night, she hoped to do Andy's show "without mentioning her whose name will not be mentioned."

She was successful, though Cohen still wanted to know what Etheridge thought about the hysteria that erupted when Brad and Jen were finally photographed together at the SAG Awards earlier this year.

"I was hoping I could do your show without mentioning her whose name will not be mentioned. I loved Brad and Jen together, they were beautiful," said Melissa.

"I believe they will always remain friends because they're two special people that can get through anything and hope that their friendship lasts," she added. "Those were the glory days, I remember those days. Yeah."

In the same segment, fellow guest Kristen Johnston was asked by a viewer to describe her relationship with Ryan Reynolds in the '90s with just three words.

"With Ryan Reynolds?! It was so long ago I forgot," she said, before saying he was "so nice, great guy, lovely person."

Johnston was also asked about her infamous role on "Sex and the City," an appearance which ended with her character plummeting to her death out a window during a party.

"I've known Sarah Jessica [Parker] for years and she kept offering me little parts and I was doing '3rd Rock' at the time," she explained. "Finally it happened I was free, it was the second to last episode ever and it was the best part ever, so it just came together."

Johnston said she went into it knowing her character's fate, but had "no idea" how iconic the moment would become.

Cohen asked whether she witnessed "any tension" between the core four cast members, as it became evident Kim Cattrall and her costars didn't exactly get along by the tail-end of the series.

"I noticed that Kim was a little quieter than the rest of them, to be honest," revealed Kristen. "I think they were done, they were fried. It was the end of this huge whirlwind."

During on additional game, Andy revealed he's been doing his show wearing nothing but his boxer shorts from the waist down.

Melissa revealed she's been kissed on the mouth by Dan Marino, Steven Tyler and Paul McCartney, while Johnston said she hasn't gotten out of her pajamas in two weeks.