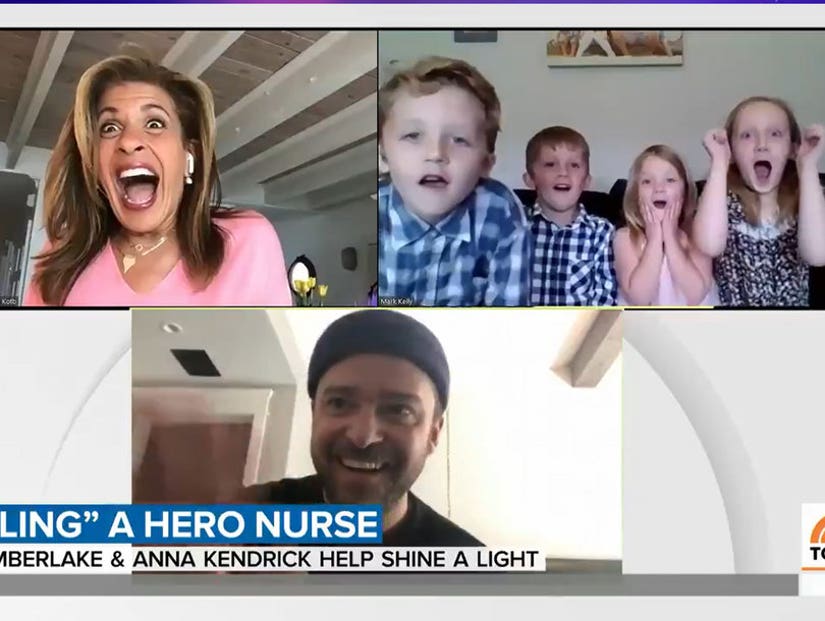 With their mother in New York, this Kansas family got one heck of a surprise during a video chat.

The Kelly Family has been staying in touch with nurse mom Stacie via daily iPhone videos while she's in New York City fighting the coronavirus pandemic. But on Friday, they had a very big surprise waiting for them on the other line.

This morning on "TODAY," host Hoda Kotb told viewers about Stacie Kelly, one of the many ER nurses who left their home states to help fight COVID-19 where it's at its strongest: NYC. The Kansas native left behind four children -- Camryn, 4, McClain, 6, Delaynie, 8, and Sullivan, 10 -- and her husband.

.@jtimberlake and @AnnaKendrick47 surprise the family of one nurse who left her family to fight coronavirus on the front lines in New York. pic.twitter.com/OnIbBxRwwB

As Stacie continued to work around the clock, Kotb caught up with the rest of her family via video chat, where the kids praised their mom's efforts. "She doesn't want any people to die," one of the kids said when asked why she's helping people. Hearing that the children were all fans of the "Trolls" movies, she then gave them a big surprise and looped both Justin Timberlake and Anna Kendrick into the call.

The kids were all in shock when Justin first popped up on the screen, before he brought Kendrick into the picture. "Hi Poppy!" one of the kids exclaimed, referencing Kendrick's character in the films.

Kendrick asked if the kids were "so proud" of their mom, saying they must think "she's the best mom in the world." They agreed, shouting "Yes!" Timberlake said she's his "hero" too, before giving dad Mark a shoutout. "I got one 5-year-old and it's hard for me to get him to sleep, you're my other hero!" said Justin.

The call comes after both Timberlake and Kendrick had some virtual face time with another pair of cute kids during an appearance on "The Kelly Clarkson Show."

In an interview airing today, Clarkson -- who also provides a voice in the "Trolls" movies -- tasked her guests to find something in the room they're "related to." While Justin and Anna grabbed dolls of their animated alter-egos, Kelly went more literal with her search and pulled her two children, River and Remy, into the picture.

"I love your acting," little River told the two before being sent on her way.