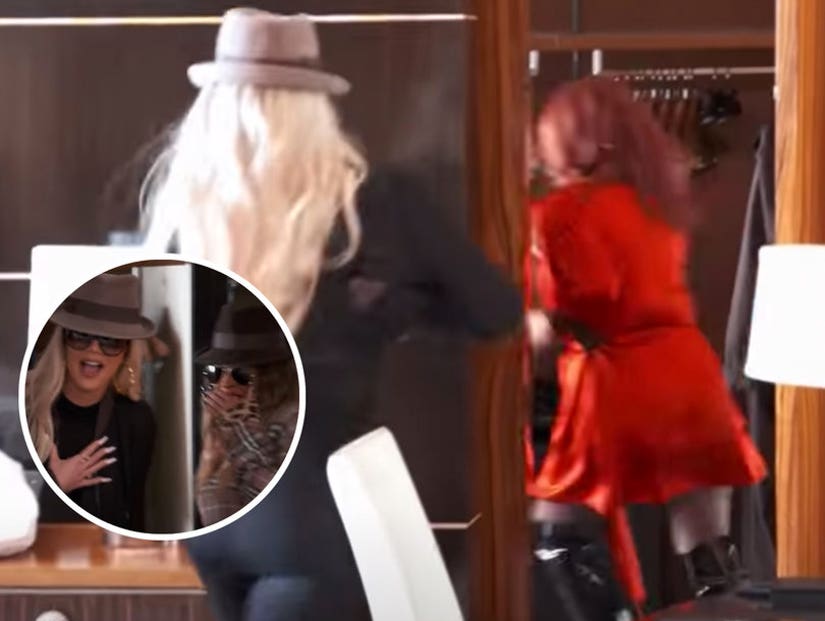 Kris does her best to get Khloe on the horse again, before Khloe suspects Corey is cheating on her mom -- and finds quite the surprise in his hotel room.

The episode started with Kim and Khloe Kardashian expressing that they supported Kourtney's decision to take a step back from filming the show. They also mentioned that they haven't heard from her, but Kourtney would let them know when she wanted to film. They're all for whatever makes her soul happy.

In other words: no filming, no check. PERIOD. - North West

At Khloe's house, Kris asked Khloe if she was dating anyone or had she been on a date recently. Khloe said she hadn't been on a date since she and Tristan broke up. Her friends have tried to hook her up, but she just wanted to focus on herself and her daughter. She's completely happy and fine. She thought she might not ever date again. This saddened Kris because she wanted Khloe to live her best life and have another baby again. Kris told Khloe she needed to freeze her eggs.

We have enough people in this family. Can people just chill? I'm still learning everyone's name. I only just recently stopped calling True, "That girl with that dad." - NW

Later, Kris went to lunch with Khloe and Kendall. She arrived late and told her girls that she was having a makeout session in the car with her boyfriend, Corey. Corey was supposed to join them for lunch, but Kris said he was tired because they were up all night. Khloe and Kendall looked grossed out as she was talking about her and her boyfriend's sex life. Khloe felt like Kris overshared. Kris thought her girls were giving her a hard time about feeling sexual, but said when they're her age they'll understand. Kris said she's in a stage where she can't get enough of her boyfriend. However, she thought it was unfair that she's dating and having the time of her life, while Khloe was not.

I was actually supposed to attend this lunch, but had a conference call last minute. Honestly, I would've walked out the minute I heard Kris say she was making out with Corey. I will not tolerate such talk at a table I'm supposed to eat at. - NW

Kim and Kris visited Kris' mom, MJ. Kris said that Khloe had an attitude and felt defeated about dating and kids. Kris wished Tristan and Khloe would've worked out, but in the meantime Khloe needs to freeze her eggs. MJ and Kim agreed and wanted to figure out a way to get her out and connect with different people.

Kris also offered to carry Khloe's baby so she could get a pregnancy spread in Vogue. Never underestimate how calculated this woman is. - NW

At Kendall's house, Scott informed Khloe and Kendall that he had a speaking engagement in Arizona at a real estate conference. Scott was excited because he never thought that selling houses was going to turn into speaking engagements. This was a great improvement from being paid to go to parties.

This conference clearly had a budget. A very small, embarrassing budget. - NW

Kris and MJ went to Dicks Sporting Goods for holiday shopping. While shopping, Kris spotted an attractive man and got the idea to find a guy for Khloe in the store. She said that a sporting goods store was a great place to flirt with men. Kris called Khloe to let her know that there were cute guys, as MJ was showing the men her pictures. Khloe was not amused and hung up on Kris. Kris said she needed to get more creative.

Later, Kris invited Kim and Khloe to the golf course. While hitting balls, Kris met two more attractive men and began to grill them. Khloe became suspicious of her behavior and figured that Kris was trying to hook her up with them. Khloe maintained that she was single and very happy.

Back at the Kylie Cosmetic offices, Corey brought Kris some work documents. Kris asked Corey if he had five minutes for a quickie. Corey said he could make the time and Kris immediately took her mic off and kicked production out of the office. Kris said at her age sex is amazing!

I have advised Auntie Kylie to sue Kris for fornicating in her offices. It's just so disrespectful that Kris treats the Kylie Cosmetic offices like a brothel. She needs to be more professional. There's not enough disinfecting wipes in the world to get me to visit those offices now. - NW

While Kim was visiting Scott's house, he was freaking out because initially he thought he would be speaking at the conference for four to five minutes, but it turned out that he was going to be speaking for 45 minutes. He wanted to get advice from Kim because she has done a lot of speaking engagements. She advised him to speak thoroughly and give as many details as possible. She suggested he practice speaking in front of her to get a feel for it. He wasn't completely comfortable and was getting stressed, so he decided he needed to take a class or something.

Typical Scott to think he would only be working for five minutes. He was extra devastated when he learned that there were no breaks during those 45 minutes. - NW

Later, Kim and Scott went to The Groundlings to take an improv class to help Scott get comfortable with getting on stage and talking. They were immediately intimidated because everyone was so witty and clever. Kim didn't last past the warm-up rounds because the exercises were too silly for her, so she decided to sit and support instead of participate. Scott was actually really good during his exercise and recognized that people liked that he pushed himself to interact and step out of his boundaries. After the improv class, he felt like he could take on his speaking engagement.

At Khloe's house, Khloe told Malika that her mom was pushing her to date, but she's not in that head space. She also said she's not sure if she wanted to have more kids. Malika said that her not wanting to date and not wanting more kids is what was driving Kris' behavior. Maliaka said while Khloe was in the unsure phase about more kids, she should freeze her eggs because it's the best insurance policy.

The Malikas can do it all: Mediate tough conversations, give advice about freezing eggs, clean gutters, manage my calendar, make reservations for my dinner meeting at Nobu, and anything else I ask of them during business hours. -NW

Later, Khloe visited Kris at the Kylie Cosmetics office. She wanted Kris to know that she was happy and when she was ready to date again, she would. Khloe said she did not need her assistance and Kris pushing her actually made her uncomfortable. However, she did decide to freeze her eggs. Kris was happy and relieved.

In Arizona, Scott appeared at his speaking engagement and hoped that his improv classes would help him. He was intimidated and wanted to be good. Scott spoke about his show, Flip It Like Disick, and his experience flipping houses. He enjoyed the experience and would love to keep doing it.

Scott actually working is a refreshing change on our show. I hope the viewers like the direction we're going in. If not I'm sure we can revisit the Scott sneaking girls on the family trip plot line. - NW

While out with Khloe, Malika gets a call telling her that Corey was at the Beverly Wilshire hotel with a red headed woman. They immediately decided to go to the hotel to bust him in the act. If it turned out to be true, Khloe was prepared to cut Corey. The girls knew the floor and the room Corey was in from the informant.

Corey opened the door and was shocked to see them, as the two ran past him. Khloe and Malika inspected the entire hotel room and chased the red head around, only to discover that the red head was Kris in a wig, lingerie and thigh-high boots.

This is the content you get when Auntie Kourt leaves the show. This is what she wanted, so I hope she's happy. To even think that Corey would cheat on Kris is ridiculous. Corey respects Kris way too much for that. She's like a second mom to him. - NW