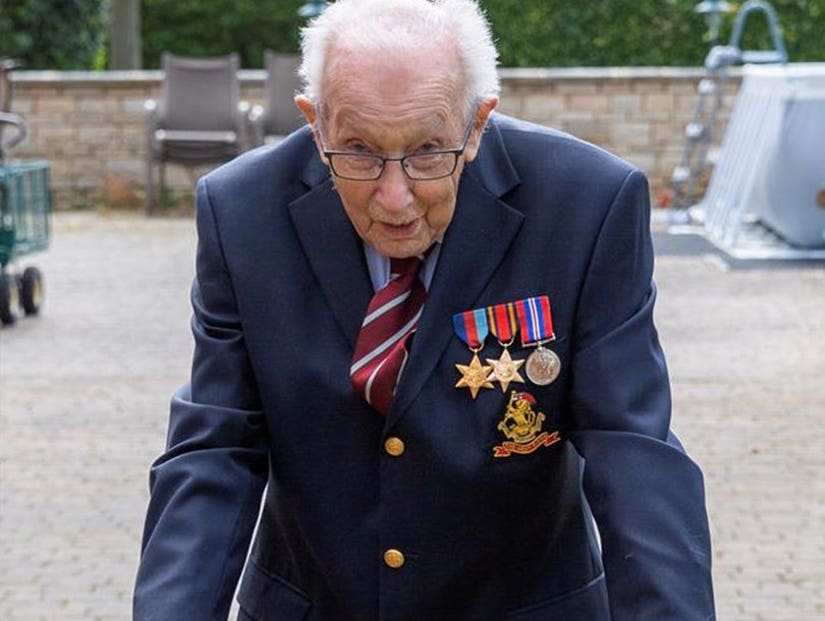 The war vet raised over $45 million for charity.

Fundraising hero and war veteran Captain Sir Tom Moore has passed away at the age of 100.

The viral sensation had tested positive for Covid-19 last week and was taken to hospital on Sunday.

A statement from his family, obtained by Yahoo, quoted his daughters Hannah Ingram-Moore and Lucy Teixeira: "It is with great sadness that we announce the death of our dear father, Captain Sir Tom Moore."

"We are so grateful that we were with him during the last hours of his life; Hannah, Benjie and Georgia by his bedside and Lucy on FaceTime. We spent hours chatting to him, reminiscing about our childhood and our wonderful mother. We shared laughter and tears together."

"The last year of our father’s life was nothing short of remarkable. He was rejuvenated and experienced things he’d only ever dreamed of."

According to Yahoo, he raised over $45 million for NHS charities by doing laps in his garden.

Captain Tom Moore, 99, is collecting a treasury of fans, and donations! He is currently up to £7,979,391.59 (roughly $10 million) for making laps around his garden to benefit the National Health Service in England as of Wednesday. That's an increase of $7 million since the day before!

A World War II veteran in England raised over £2.6 million ($3 million USD) for charity in one week by doing laps in his garden.

Tom Moore, 99, set up a challenge to complete 100 lengths before his 100th birthday on April 30, and the proceeds will go to the National Health Service, who he said has helped him in recovery with a hip replacement and skin cancer, according to Metro UK.

Setting a target of £1,000, and expecting only local support from his hometown of Marston Moretaine, Bedfordshire, Moore began his daily walks on April 6.

"I thank the British public from the bottom of my heart," he told the BBC "It's difficult to imagine all these kind people who have donated so far. It's just amazing."

Moore's daughter, Hannah Ingram-Moore, created the JustGiving page and has had to increase the goal three times as the response has been astounding.

"We are overwhelmed by the response," she wrote on Twitter. "It's extraordinary. We remain proud and humbled by the generosity of the British public."

The description on Moore's fundraising website reads, "Cpt Tom Moore is walking 100 lengths of his garden for NHS Charities Together because our fantastic NHS workers are national heroes."

The page also gave a bit of history on Moore, saying he was born in Keighley, West Yorkshire and later "completed an apprenticeship as a Civil Engineer."

He enlisted in 145th Regiment Royal Armoured Corps at the beginning of the World War II and was selected for Officer Training in in 1940.

Moore was posted in India as well, before returning home to become an Instructor at The Armoured Fighting Vehicle School.

Check out videos of the young-at-heart hero checking off his bucket list above!