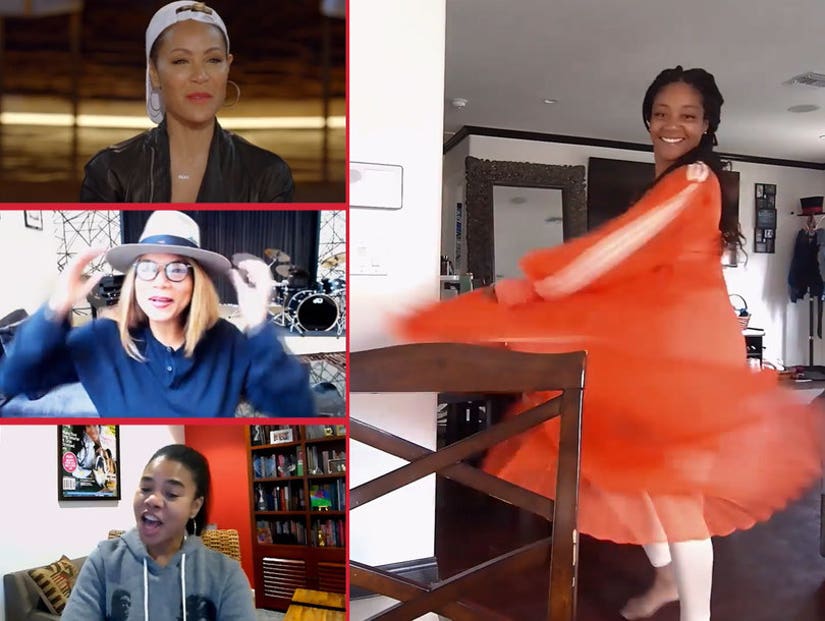 Tiffany thirsts over Henry Cavill -- but who's learning to strip and who stocked up on bullets?

This video is honestly everything we need right now.

To lighten the mood amid the coronavirus pandemic, Jada Pinkett Smith reunited with her "Girls Trip" costars Queen Latifah, Regina Hall and Tiffany Haddish for a new episode of "Red Table Talk" on Facebook Watch -- and it did not disappoint.

The conversation proved that even A-listers have technical difficulties when it comes to video conferencing from home, as the Flossy Posse all struggled to connect with Jada right off the bat. Once they all got on the same page, the foursome first opened up about how their beauty routines have changed since going into lockdown.

"I glued on lashes for y'all!" exclaimed Tiffany, before Latifah showed video of how she blew out and pressed her own hair earlier that morning. Jada, meanwhile, said her hair was a mess and opted to wear a hat -- while Regina expressed "insecurities" about her edges.

"Bumble be popping. You can talk to guys, FaceTime without them having your phone number and watching TV shows together, them watching me cook something, stuff like that," she explained. "It's fun til the dudes try to pull their wee-wees out. I don't want to see your thing thing just yet!"

She went on to explain why she prefers small penises, saying, "I feel like small ones respect you, they kind, they buy you nice gifts. Small penises are penises of service. Big penises are disrespectful." Added Regina, "I'm always a person who appreciated an average size. We're both happy, no one has shame." 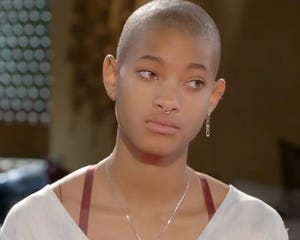 Hall said she's been spending her time watching movies, "harassing friends" and "learning how to strip," before Jada added she's been working out a lot. "This quarantine time body gonna be right," said Smith.

The ladies then all revealed their current celebrity crushes. Haddish continued to express her love for John Carlos Stanton of the Yankees, before also throwing some thirst in Henry Cavill's direction. "Have you guys seen The Witcher?" she asked. "Yeah, Henry Cavill, he can get it as a Witcher. I'll be a witch and he can come hunt me. He got white hair, he looks wise. That strong jawline."

Both Jada and Regina revealed they've been crushing on Governors Cuomo and Newsom from New York and California, respectively, before Latifah shared hers. "I like the girl, she's a Brazilian model," she said, as Jada clarified she meant Adriana Lima. "That's my crush," added Latifah, "She got fire, I like her."

"If we talking about females, then I'm into Meryl Streep," interjected Tiffany.

The women then took some questions from viewers, as one asked if they'd be game for a "Girls Trip" sequel. "I think we're all down, we just want to make sure it's amazing," said Regina. "That it's the right thing and a great thing."

Latifah said she couldn't wait to do it and hoped they could go somewhere "fun." As Haddish suggested the Samoan islands, Hall joked, "Do they have little dicks? I don't want to go anywhere the big ones are." 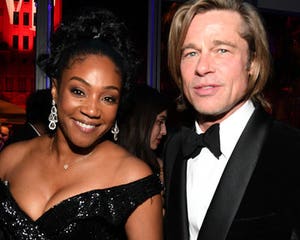 Another viewer asked about Jada's sex scene with Kofi Siribe in the film, wondering what husband Will Smith thought about it. "It would be more difficult if he wasn't an actor," she said. "Those kind of scenes aren't intimate at all, they aren't necessarily fun or sexy."

"I don't know," said Haddish, "I did my first little sex scene and I liked everyone watching and telling me what to do!"

The four then played a game of superlatives, before Latifah revealed what she stocked up on before going into lockdown. "I immediately stocked up on food, bullets," she replied. "I made sure everything is locked and loaded around here. Queen gotta handle the castle!"

The episode ended with Haddish revealing all the men in Hollywood she'd love to kiss on screen -- adding Tom Cruise, Blair Underwood, Kofi, Michael B. Jordan, Damon Wayans and Adam Sandler to the list.

Watch and enjoy the full episode above! 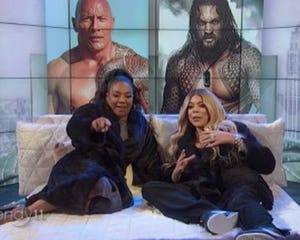 Tiffany Haddish Plays Who'd You Rather, Wants to Lick Between Jason Momoa's Tattoos