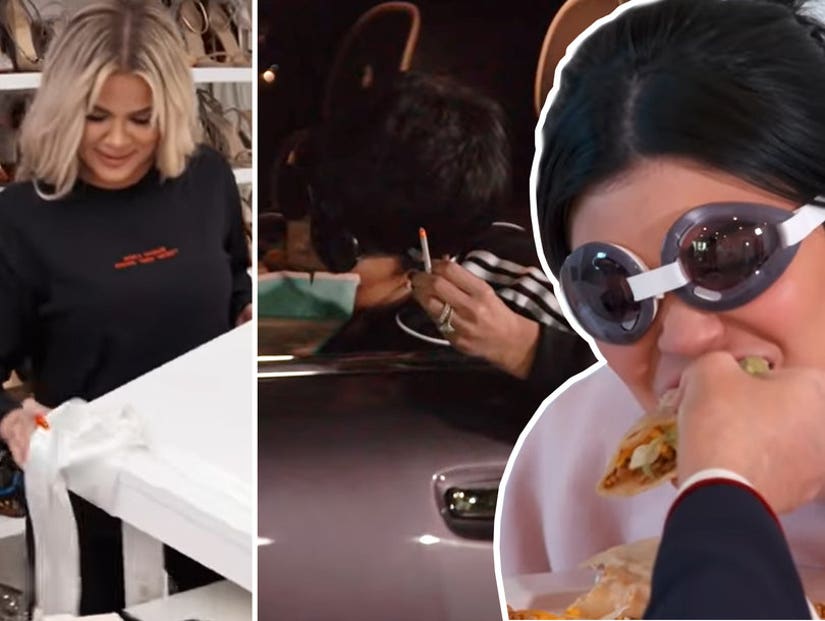 "Luckily, my parents are together so I have no idea what it's like to be in a co-parenting situation. It sounds a mess," says "North West."

This week's episode started with Khloe Kardashian in her closet talking to Tristan Thompson. He said he had a package sent to her house and wanted to know if she received it. Khloe's assistant found the package and brought it to her. It was a purse from Christian Dior. Khloe said she and Tristan were in a good place, but wished he was like that when they were together. He never bought her anything when they were an actual couple. While she appreciated the gift, she wanted him to stop buying her things so lines wouldn't be blurred.

How arrogant of Auntie Khloe to assume Tristan actually bought her a purse from Dior. The purse was so hideous, it looked like something the Cavaliers put in their gift bags at their holiday party. - North West

Tristan showed Khloe some toys at his house in Cleveland that True may have outgrown. Khloe wanted to donate her infant toys to charity, but Tristan asked if they will have to buy everything all over again if they have another girl. Khloe looked confused and asked, "Who's having another girl with you?." Tristan said that True needed a sibling, Khloe said she would get some embryos and might borrow sperm from him, but she'll figure that out later.

This is a great time to remind the audience that True already has an older brother. I'm not judging him for forgetting. My mom also has siblings that are pretty forgettable. There's that one who makes socks and that other that has a Tumblr page called, Poosh. Who can really remember? - NW

Later, Khloe and Scott met for lunch to talk about their next prank on Kris Jenner. They agreed that it has to be something that would be super embarrassing. They came up with the idea to have Khloe dress up like Kris and stage embarrassing paparazzi pictures to make it look like she fell in a bush or that she peed in public.

Most paparazzi pictures of Kris are already embarrassing. Never forget she has been photographed in public with Jonathan more than once. I would be mortified. - NW

In the car, Kylie Jenner and her best friend, Anastasia "Stass" Karanikolaou, discussed their plans for Halloween. While chatting, Kylie almost hit a car. She said her vision started getting worse and affected her daily life after she got pregnant, so she went and got glasses. When Kylie was younger, she always wanted to wear glasses, but since she actually needed them, she was too embarrassed to wear them. Her glasses were not in the car at the time, so she pulled over and let Stass drive.

Wow. My mom is constantly dragging me, but she's never blamed me for her poor eyesight or other health issues. My condolences to Stormi. - NW

At Khloe's house, Khloe asked for Kris' advice about co-parenting. Tristan's season was starting and he lived in Cleveland, but this is the first season Khloe was not with him. She hadn't put much thought into how True was going to visit him. She was wondering if she was going to have to send True to Cleveland alone. It gave her anxiety to even talk about sending True to by herself and wanted to avoid it altogether. Kris told her there's no handbook for co-parenting, but day by day she would figure it out.

At Kylie's house, Stass asked Kylie if she enjoyed the movie they went to see the night before. Kylie admitted she forgot her glasses so she couldn't even see the movie. Stass told her that she was getting Lasik eye surgery and invited her to go with her, but Kylie was scared. Almost everyone in her family has gotten Lasik surgery, but the idea of having surgery on her eyes frightened her. Stass assured her that it would be quick and she wouldn't feel anything. Kylie eventually decided to face her fears and have the surgery because it would be life changing.

I'm so glad we casted Stass as Auntie Kylie's replacement best friend on the show. She's working out great. Stass fits all the matching outfits, she was willing to go through eye surgery just for the show, and unlike the previous best friend, she and Auntie Khloe don't have the same taste in men. It's the perfect situation. - NW.

Later, Tristan surprised Khloe and True at their house and was spending 24 hours in town. Khloe asked him to feed True in the house while she stayed in the backyard to talk to her twin best friends, Malika and Kadija Haaq. The twins told her they got a job offer, but they would have to move to Atlanta for about 6 months. Malika started laughing and confessed they were joking, but the truth was she was pregnant. Being a mom would be her new job. Khloe was stunned and excited. Malika was terrified to tell Kim because she talks a lot.

Would anyone believe that The Malikas got a real job? Auntie Khloe is so gullible.

I was disappointed to learn that one of The Malikas would tell Auntie Khloe about the pregnancy before me, her employer. This pregnancy was such inconvenient timing for me. I was planning the family Christmas party, a KKW campaign and moving Saint's room further away from me at the compound. Her unexpected pregnancy made work very stressful for me. - NW

Later at Scott's house, he and Khloe put their prank into motion as she dressed up as Kris with a wig and a track suit. She said she actually loved being Kris Jenner. Her brother, Rob, was able to finagle Kris' car so no roads led back to Khloe or Scott. Kim's publicist, Tracey Nguyen, then came up with the idea to create a build up before actually showing Kris the photos.

Khloe and Scott went and shot their faux Kris Jenner paparazzi photos. The goal was to shoot things Kris would never do and things she wouldn't want on camera, like stuffing her face with french fries, smoking, and peeing on the street.

Kris, meanwhile, arrived at Kylie's house to take her daughter to her Lasik eye surgery appointment. Kylie was still nervous about the surgery, but Kris told her that if she could give birth this surgery was nothing. The same eye surgeon that did Kim's Lasik surgery did Kylie and Stass' surgery. Stass went first to assure Kylie there was nothing to worry about. After the surgery, Kylie was really happy that she did it. However, her and Stass felt loopy because of the medicine.

Mommy had Lasik eye surgery on the show years ago. This has been done. It's funny how an alleged billionaire can't find her own brand or story lines. We are so tired of carrying this family. It would be refreshing for someone to be original for once. - NW

Back at Khloe's house, Khloe told Kim that Tristan unexpectedly showed up at her house to see True. She appreciated him trying to be nice, but it made her feel smothered. Kim agreed that they were spending too much time together. Khloe still didn't feel comfortable sending True to Cleveland alone because Tristan practices all day and wouldn't be able to spend time with their daughter, but acknowledged True needed to go there. Khloe decided she would take True to Cleveland herself.

After her Lasik surgery, Kylie was brought home by Kris because she was a bit out of it from the medicine. Kris put her to bed and gave her a bell to ring so Kylie could summon her whenever she needed something. Kris tried to leave the room, but Kylie immediately used her bell to request water and tacos. Kylie was grateful for Kris making the experience special for her. Kylie wanted Kris to lay down with her, but Kris had too many things to do. So instead, Kris put a wig on a stuff pillow and laid it next Kylie so she'd think it was her.

Of course Kris took care of her million dollar baby. She needed to protect her cash cow. At the time my mom had eye surgery, she only barely had an endorsement deal with Skechers, so Kris left her in an apartment, bounced and then had her working a week after surgery. My how times changed. - NW

Khloe took True to Tristan's home in Cleveland. Her plan was to stay for a day to make sure everything was in place and then leave True with Tristan while she returned home. She hadn't been to Cleaveland in a long time so being there was bittersweet. Khloe felt better about leaving True in Cleveland after hearing Tristan ask the right questions and be attentive. Tristan tried to convince Khloe to stay, but Khloe insisted on going back home.

So if Tristan is that one that cheated, why are we punishing True by making her go to Cleveland? - NW

Back in Calabasas, Kim's publicist Tracy made a call to Kris to prank her about the fake paparazzi photos while Khloe and Scott listened. Tracy told her that TMZ called and someone was trying to shop unflattering photos of her going through trash at the Kylie Cosmetic Offices and throwing trash out of her car. Kris started asking a lot of questions and was clearly upset. Khloe and Scott were loving it.

Once Kylie recovered, The family had a party to celebrate Kylie's vision. While at the party, Tracy called Kris to prank her again about the fake paparazzi pictures of her throwing out trash. Kris was again very bothered by the situation and insisted it wasn't her. Scott and Khloe were satisfied with how well the prank was going.

This is the first time someone in this family had a surgery and there was a party. I'm almost sorry I missed it. - NW

Later, Tristan called Khloe while she was visiting Scott's house. Tristan said he and True had a great time and True was completely fine. He thanked Khloe for trusting him with their princess. Khloe still wasn't comfortable sending her weekly, but said that this was a good start. Scott thought any effort Tristan put in was a positive thing.