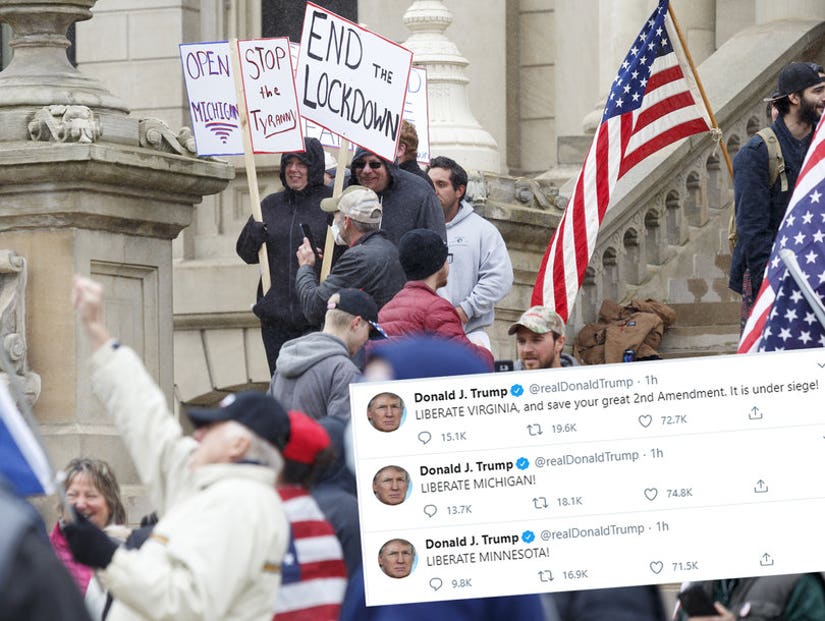 "I'm no virologist but encouraging civil unrest during a pandemic seems ill advised."

Donald Trump has called on Americans to rebel against the coronavirus lockdown the government itself is implementing.

One day after angry residents held protests against the stay-at-home orders, the President used Twitter to call for the liberation of three states -- three states which have Democratic governors.

"LIBERATE MINNESOTA!" "LIBERATE MICHIGAN!" "LIBERATE VIRGINIA" he posted in three separate tweets, adding to the final one "and save your great 2nd Amendment. It is under siege!"

LIBERATE VIRGINIA, and save your great 2nd Amendment. It is under siege!

The tweets were instantly met with fury and utter disbelief online, with many users accusing the POTUS of inciting violence.

A day earlier, Trump's Coronavirus task force announced that the decision of when to reopen each state will be largely left to individual governors.

This coincided with massive protests in the three states, as residents -- mainly Trump supporters, judging by the flags -- demanded the strict social distancing laws be lifted.

In Michigan, "Operation Gridlock" saw thousands get in their cars and converge in the state capital, many of them openly carrying guns, but not necessarily wearing masks, and chanting "lock her up!" at Governor Gretchen Whitmer.

In Minnesota, protesters descended on the home of Governor Tim Walz.

"A small segment of the state is protesting and that's their right," Gov Whitmer told CNN. "The sad part is, though, that the more they're out and about, the more likely they are to spread Covid-19 and the more likely we're going to have to take this posture for a longer period of time."

While Trump has continuously hinted at reopening the country on an ever-shifting date just around the corner, health officials -- including Dr Anthony Fauci and Dr Deborah Birx, who are the faces of the White House's fight against the virus -- continue to advise staying at home and maintaining social distancing, as they attempt to flatten the curve of the spread and protect health systems from being overwhelmed.

See some of the angry reactions to Trump's tweets below:

LIBERATE AMERICA from Trump's failure to come up with a plan for testing.

Now is the time to get your cabinet together and implement the 25th amendment to get this mentally unstable President out of office. Lives are depending on you @VP!

Trump is calling for Minnesota, Michigan and Virginia to be "liberated" from the very guidelines that he, himself, put out last night.

Trump is literally calling for these states to be liberated from his own agenda.

That's how insane he has become.
Liberate America from Trump!

Just wondering, what elected member of the GOP is ok with this lunatic tweeting this shit and inciting violence. pic.twitter.com/CNYRBnZXOj

Dear @realDonaldTrump: Michigan does not meet the criteria you set for phase 1 reopening. It would need to show downward trajectory within 14 day period & get its hospitals out of crisis.

Stop telling people to violate your own guidelines with ridiculous liberate tweets. https://t.co/j33s6EXKgn

Donald Trump's “liberate” tweets are an act of domestic terrorism against the United States, punishable by life in prison without parole. They may also be a violation of Twitter terms of service.

A lot of people who want to "Liberate America" don't understand that until there's adequate testing and/or a viable treatment or vaccine, we need to stay home - just like Trump did during Vietnam. #StayHomeLikeTrumpinVietnam

Trump's reckless rhetoric could encourage--let's be honest, it will encourage, and it's intended to encourage--his followers to ignore lawful state orders. It will lead to lawless acts that endanger the well-being of other Americans. Republicans, conservatives--you ok with that? https://t.co/GREvhBfrBM

Actually, we tried to liberate America from Trump, in an entirely appropriate and constitutional way. But the Senate Republicans wouldn't hold a real trial, ignored the evidence and voted to keep Trump in office.

Trump tweeting “Liberate Michigan” is so irresponsible and dangerous. He just put us all at risks by telling the crazies it's ok to come out. The rural hospitals could never handle being inundated with Coronavirus cases. Does he want certain people to get sick and die?

This is what the alleged President of the United States tweets during a global pandemic that has killed over 34,000? Something that will incite VIOLENCE from an already enraged base of poorly educated taking every word you say verbatim? We need to liberate America from YOU.

.@Jack and @TwitterSafety, if your rules mean anything, you need to suspend Trump from your platform NOW for inciting violence. If not, you can expect a big lawsuit if — God forbid — someone gets killed as a result of Trump's Twitter rants. pic.twitter.com/s1PzoEIPlc

He's inciting violence and civil unrest during a pandemic.

LIBERATE AMERICA! Whoever is in charge of the Fedral goverment is doing a TERRIBLE job!!!