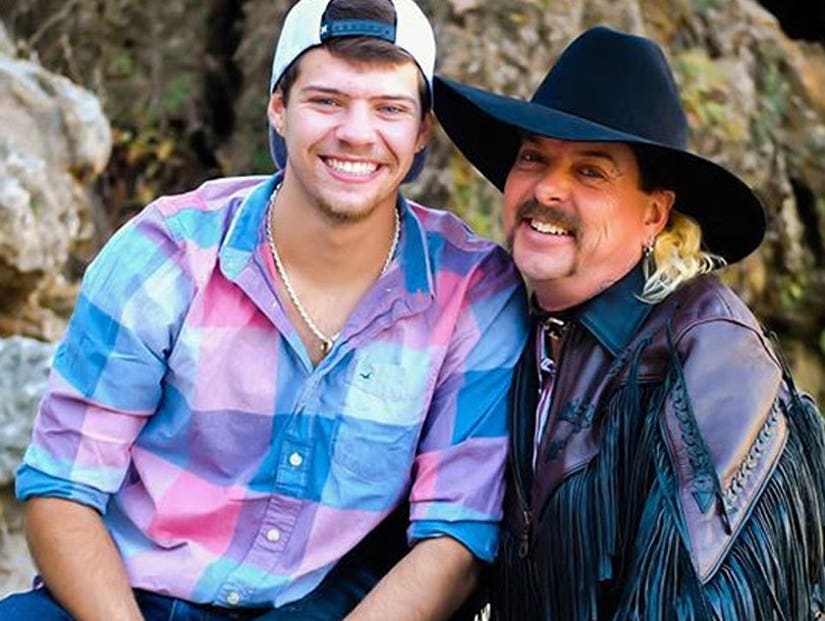 Passage claims he's reached out to Kim Kardashian and Cardi B for help and reveals his future goals.

"Tiger King" may have wrapped things up on Netflix, but the fallout continues.

With nearly everyone involved in the docuseries speaking out in new interviews, statements and specials, Joe Exotic's husband, Dillon Passage, is hitting back at some of the wildest claims made about his man. 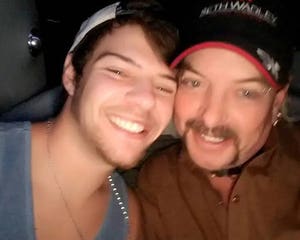 In a radio interview with AJ Gibson and Mikalah Gordon of CHANNEL Q's The Morning Beat, he reacted to producer Rick Kirkham saying Joe Maldonado-Passage has a son named Brandon who actually briefly appeared in the documentary.

"Joe does not have any kids, okay?" said Dillon. "I recently heard the same rumor, and I was like, are you trying to tell me that I'm a stepdad to a 38-year-old and I have grandkids? Joe used to be with this girl, her name was Kim. But when him and Kim split up, Joe's brother actually got with Kim and they had a son and that is Brandon Chappell."

The hosts also asked Dillon about claims Jeff Lowe recently made regarding Joe's sex life. They danced around the specifics and we won't get into them here, but Dillon brought up Lowe's bestiality claims on his own.

"Obviously, Joe was not secretive about his sex life. He may have done some weird things," said Dillon. "He's obviously had multiple sex partners at once, that's not a secret. But I heard allegations that Jeff saying that Joe and [husband John Finlay] were having sex with animals on the zoo and I thought that was completely ridiculous."

"I never heard anything like that from Joe," he added, "but I also wouldn't admit that if I was him." 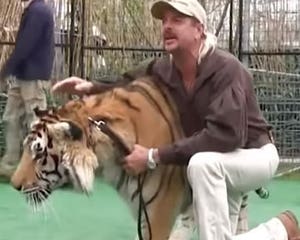 He also addressed speculation Carole Baskin killed her husband -- diplomatically calling it a "sketchy situation" he'll leave to the authorities -- and said his own family believes Joe was "set up" after watching the documentary.

Passage added that both he and his husband have been receiving nudes like crazy ever since the Netflix series dropped. "If he needs to see some weiner, let him see some weiner," said Dillon, adding he's not jealous.

"Going through my message requests on Instagram, my DM requests, is insane. There's so many dicks," he said of his own social outreach. "A lot of them are not worth looking at, let me tell you that. They're either super, itty bitty or, like, deformed looking. It's a lot."

According to Dillon, he's also reached out to Cardi B and Kim Kardashian for their help to get Joe out of jail, with no response so far.

Looking ahead, Passage said he has no intention to start seeing other people while Joe is behind bars. He explained that he's not on any dating apps, though claimed Joe would be "super supportive" if and when he decided he was "Ready to move on." He added, "I'm gonna be still on Team Joe and even if I do decide to find somebody, I'm still gonna talk to Joe as much as I do."

He added he doesn't "want to be known as 'Joe Exotic's husband'" for the rest of his life and hopes to make a name for himself. "My heart lies with music. It's not singing, but music festivals and the EDM world are definitely a big part of my life and I love to dance, so if I can do anything with that it would be awesome," he explained. "But I also love animals just as much. There may be things in the future in the EDM world and in the animal world, so stay tuned for that!"