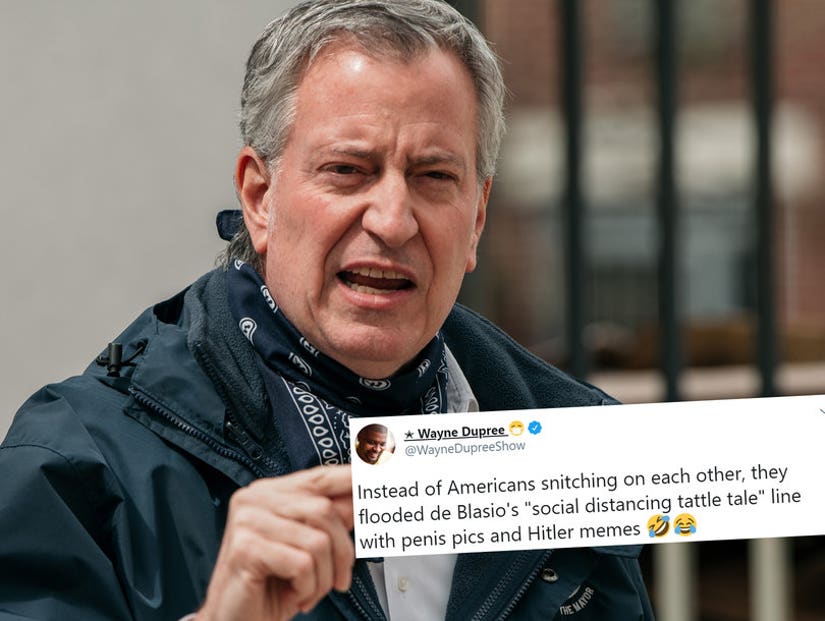 A caller phoned in a tip that de Blasio was spotted giving oral sex in an alley way.

Critics found the idea of snitching on their neighbors who haven't adhered to the new coronavirus pandemic mandates a bit much, as they bombarded the text number and 3-1-1 app with their idea of "hell no."

The lines of communication were flooded with harsh complaints, middle finger snaps, pictures of penises, Hitler comparisons and Karen memes, according to the New York Post.

How do you report places that aren't enforcing social distancing? It's simple: just snap a photo and text it to 311-692. #AskMyMayor pic.twitter.com/WQdCcVf1Rl

Another follower wanted to report de Blasio, Governor Cuomo, his daughter and George Stephanopoulos after pictures emerged of them not wearing face masks over the last few weeks.

And a caller phoned in a tip that de Blasio was giving oral sex in an alley way.

"He looked at me -- and coofed in my direction," the caller said, according to a screenshot of the 3-1-1 call provided to the outlet.

"Coofed" is a slang term being used for a coronavirus-infected cough.

The tipline was eventually suspended temporarily after the deluge of improper responses.

"The city has begun vetting everything before dispersing the information to precincts," a NYPD source told the outlet.

De Blasio first announced the tip line via Twitter on April 18 where he encouraged Big Apple residents to photograph social distancing violators and report them.

Despite the backlash, more than 14,000 reports have been submitted, according to the Wall Street Journal.

Per the news source, no legal action has been taken against the rule-breakers.

And just like that, you went full blown fascist.

DON'T. BE. A. KAREN. #SaturdayThoughts pic.twitter.com/YVKqTvcOJB