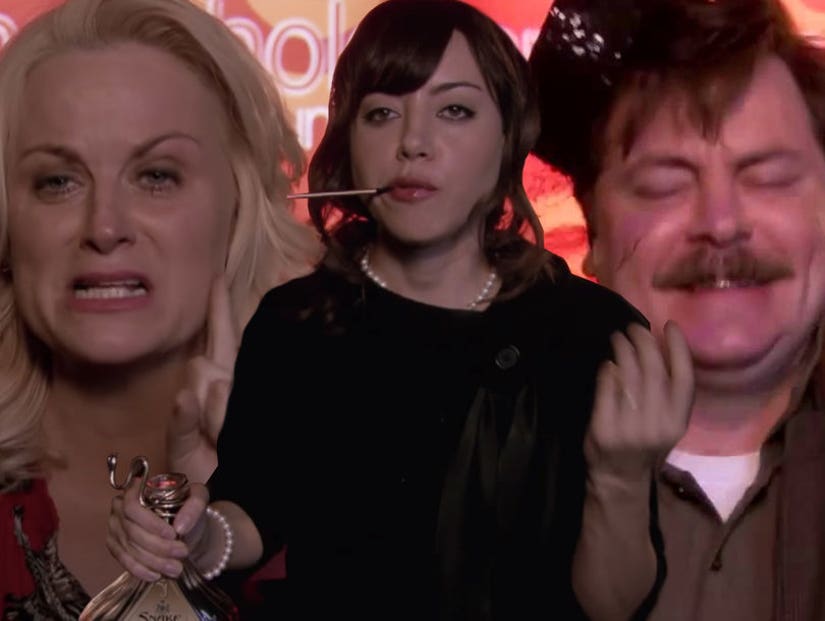 "It was a very special time," Plaza says, looking back.

9 years ago, "Parks and Recreation" aired what is literally one of the funniest 30 minutes of television ever made.

Titled "The Fight," but better remembered as the SnakeJuice episode, the half-hour launched a thousand gifs, including one of a dancing Nick Offerman which will go down in internet history.

TooFab caught up with star Aubrey Plaza before news of a show reunion -- airing Thursday night on NBC -- was announced, where she spilled on making the fan-favorite episode. In "The Fight," the entire Pawnee Parks Department has a wild night out at Tom's club, The Snakehole Lounge, where they proceed to get wasted on SnakeJuice.

Leslie gets sad drunk, Andy breaks into song, April transforms into Janet Snakehole and Ron rocks the hell out of her pillbox hat while getting his groove on. It's pure bliss.

"It came at a time when it was like, everybody knew their characters so well," said Plaza, who loved how the episode gave everyone the opportunity to show what their characters would look like when "you have no inhibitions."

"The part of your personality that comes out [when you're drunk] is like the deep, deep one that's been buried inside," she continued. "With those characters, it was such a fun game to decide, if Jerry was drunk, what is his deep personality behavior that's gonna come out?"

"It was like a weird acting challenge and Nick Offerman putting that stupid hat on and actually smiling, dancing, you would never expected to even see him happy," she said. "It was fun to come up with those choices."

She said that being around "such incredible actors" only heightened the experience, adding that it was "just so fun to see" what episode writer Amy Poehler came up with for them all.

"Basically, it was like a very selfish fun exercise for Amy where she was like, 'I'm just going to write my ideal thing I want to see these people do and then they'll have to do it because it's in the script,'" joked Plaza. "And she knows us all so well, so I think she wrote to our strengths and it was like, let loose and have fun. It was really, really ... it was a very special time."

Viewers can only hope for a little Snake Juice during Thursday's reunion. The new half-hour special -- filmed from the stars' respective homes -- will follow Amy Poehler's Leslie Knope, determined to stay connected to her friends amid the novel coronavirus pandemic and it will also feature the returns of series regulars including Plaza, Offerman, Aziz Ansari, Rashida Jones, Rob Lowe, Jim O'Heir, Chris Pratt, Retta, and Adam Scott. Other notable Pawnee guest stars are also expected to appear.

A few of the women from the show already reunited in real life earlier this year, as Plaza, Poehler, Jones and Kathryn Hahn met up for Galentine's Day -- a holiday popularized by the show where female friends spend February 13 together.

"Amy is Leslie Knope in real life. Every February she will just organize it, she just texted Katherine, Rashida and I and was like,'Guys, Galentine's Day, it's on,'" said Plaza. "She just makes it happen even though everyone's schedule's so busy."

"We love each other and never get to hang out. We make it a priority and for some reason it's worked out the past couple years," she continued. "Amy's very, she's very type A in that way. She will not let those things slide and I think for all of us, it's like an unspoken celebration and reminder of 'Parks and Rec' for us."

She went on to call Galentine's Day "such an awesome idea" in general, calling Valentine's Day "stupid" and a holiday that "doesn't mean anything." Added Plaza, "Celebrating with your female friends is the best part of that month for me. I look forward to that more than Valentine's Day, honestly."

The "Parks and Recreation" reunion airs Thursday, April 30 on NBC.