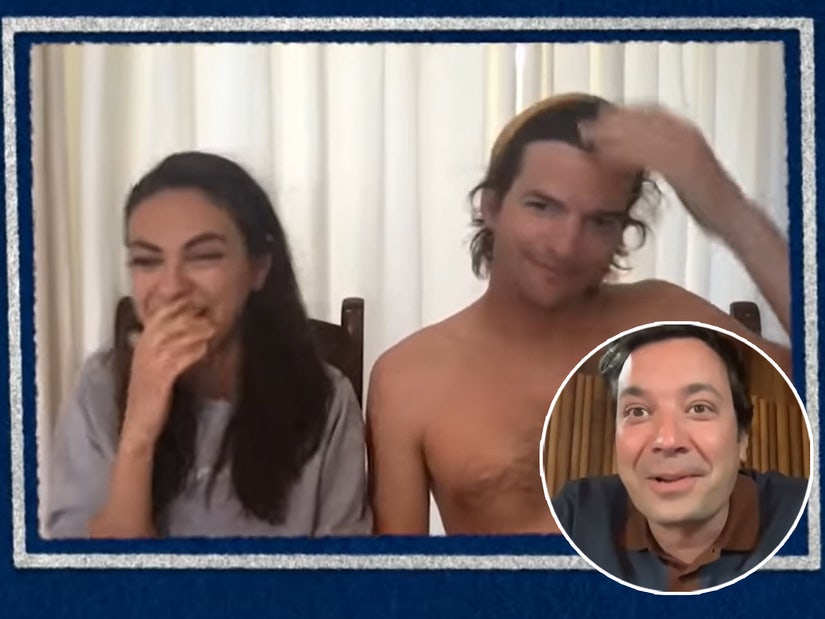 Kunis trolled her husband's chest hair and could barely hold it together as they played a game with Jimmy Fallon.

If you thought Jimmy Fallon was bad at keeping a straight face on "Saturday Night Live," wait until you see how Mila Kunis fared on his show last night.

Both Mila and Ashton Kutcher were guests on "The Tonight Show Starring Jimmy Fallon" on Monday, where he put their improv skills to work for a little game of voice swap.

The rules were simple: Mila would answer Jimmy's questions for Ashton as he moved his mouth, and vice versa. Let's just say one of them was better at it than the other.

As Fallon asked Mila how she was faring in lockdown, Ashton gave one very TMI answer on her behalf.

"I'm great, I went to the bathroom this morning and took a giant shit," he said. "I felt wonderful after doing that, because I released my entire innards and from that, it just opened me up to the wonderful energy of the world."

Kunis was already in tears over her husband's answer, before she revealed what music he's been listening to -- all kids' stuff -- and he made up her wildest "quarantine dream."

"You're not even mouthing it!" Ashton shouted at her at one point, as she was legitimately crying in laughter.

"My worst fear, I said I'll never do it, is SNL, because of this," Mila said, speaking for herself. "I enjoy laughter and I have a very hard time holding it down."

Cracked Ashton: "You and Jimmy on SNL would have been a great pair."

The game ended with "Ashton" sharing how he's been passing the time in lockdown. "My favorite thing to do is just go outside naked and run around and just let everyone see my junk," said Mila, as her husband ripped off his shirt.

"Look at me go! My chest hair is shaped like the Batman signal," she joked. "I have a permanent bat signal on my chest and I don't even know why it's there!"

During their appearance, the two also opened up about how homeschooling is going for the couple's kids; 5-year-old daughter Wyatt and 3-year-old son Dimitri.

"Boy do I appreciate teachers," said Kunis. "I realized I'm a fantastic TA. I am like a professional TA. This one over here, God bless it man."

Kutcher said he liked teaching and explained how they've made weekly curriculums with the help of the kids' school.

"The one thing we did do is we enlisted our friends to do 20 minute Zoom sessions with our kids, like teach our kids anything," added Mila. "It can be anything from making flower arrangements, architecture, anything. It gives us 20 minutes of not-parenting and also allows our kids to have another kind of interaction."

Kutcher explained that their kids ask questions about the week's topics at the start of the week, with them revealing answers as they go. This week's topic was the human body.

"One of [the questions] is how long does it take to get poop out," said Kunis. "that's an important question. I have no clue!

The two also talked about how they're raising money for COVID-19 relief by launching a quarantine-themed wine called, simply, Quarantine Wine. 100% of the proceeds go to GiveDirectly, Direct Relief, Frontline Responders Fund and America's Food Fund.

Get more information about their initiative here.