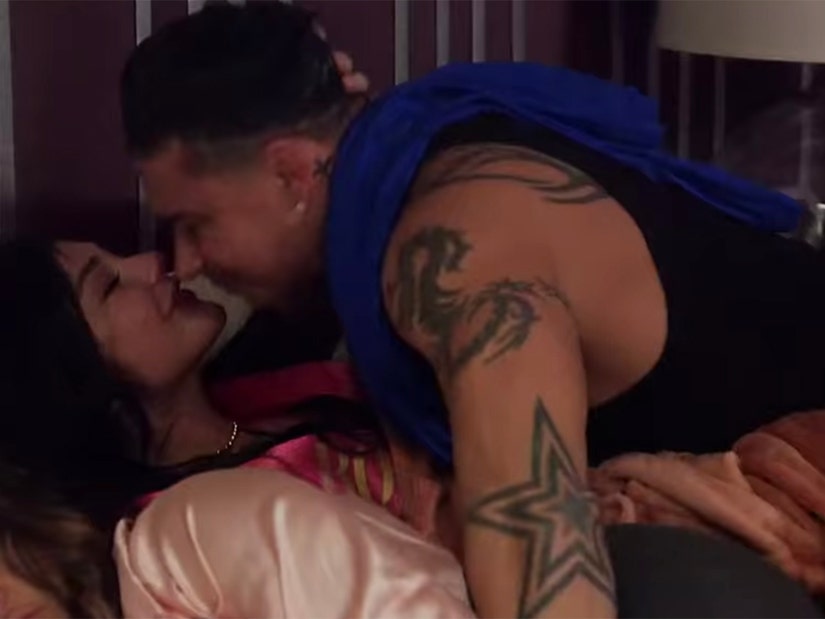 Their potential hookup has been teased in promos all season -- and tonight, viewers found out what really went down.

Following her split from Zack Carpinello after the Angelina-Las Vegas drama, Jenni was single and ready to mingle. And while the entire group celebrated Pivarnick's bachelorette weekend in New Orleans, old feelings between Jenni and Pauly resurfaced ... hard.

As they hit the town, Angelina said the two were "flirting," Snooki felt they were "vibing" and The Situation said he was getting "Season 1 vibes" from the duo.

When the party moved to a strip club, Pauly then began asking her how much she'd charge for a lap dance. "I would pay infinity for that lap dance ... I'll give you my routing number," he joked.

"If we're gonna cheat, we're gonna make it worth it," he then said to Jenni, as she reiterated that she was single. Literally every single one of their costars wanted to see them hook up, but it was Deena who put it best: "I would love to see Pauly and Jenni do sex."

As the gang made it back to their hotel, everyone but Jenni and Snooki -- who was totally passed out -- did a group confessional. "He wants to f--k Jenni," Deena said, as Pauly admitted, "I do! Don't tell her."

He then joined Jenni in bed, telling her how great she looked and smelled as they cuddled up with each other. Snooki was half-asleep, half-mumbling in the next bed over.

The peanut gallery in the next room then started chanting "F--k her! F--k her!", before the two closed the door and turned down the lights.

"I would never disrespect you. I would never make you do anything that would jeopardize anything," he told her, before he left the room. While there was some snuggling and cheek-kissing, nothing else went down.

"When I get that green light, I'm going to f--k the shit out of you," he said as he walked out. 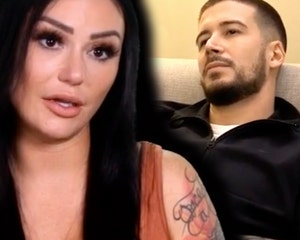 Confused as to why they didn't smush, Angelina then tried to get to the bottom of the situation. Apparently, Jenni tried to "repoen that past" with Pauly after she filed for divorce from Roger, but he "shut the door" on her.

"Me and Pauly had a nice dinner that night, then we went home together and he shut the door on me," she said. "I went back to his hotel room and it didn't work out like that. I decided to end it there. That was terrible."

Jenni did seem legitimately frustrated that nothing transpired between them, but also worried about what it would mean for their friendship if they had hooked up.

"I feel like, there actually would have to be substance there before I sleep with him," she explained. "This isn't 10 years ago."

Angelina still wanted them to do it, so she then went to Pauly and said Jenni was game. "I wanted to, but I didn't know if I was supposed to cross that line or not," he said, explaining he also worried she wasn't totally done with 24.

The episode ended with Jenni simply saying they'll "wait and see" what happens next, realizing both of them would be going solo to Angelina's wedding.

Aside from the possible hookup, the hour also brought to a close the drama between Jenni and Vinny.

She was frustrated with Vinny for seemingly downplaying 24's behavior during their wild night in Las Vegas when he spoke to her about it the next day. Knowing she was upset with him, Vinny pulled her aside for a heart to heart in the middle of Bourbon Street, as she wore a Mardi Gras mask.

Jenni said she felt "blindsided" when she saw how different he made 24's actions sound when he relayed them to their other cast mates on the show. Vinny then admitted to downplaying the situation.

"The most embarrassing thing is I went after Angelina for something I didn't have a leg to stand on," she said, since his intel led to a fight between the two female costars. "That's where I felt like you betrayed me as a friend, that hurt."

He apologized, they officially squashed their beef and the festivities continued.