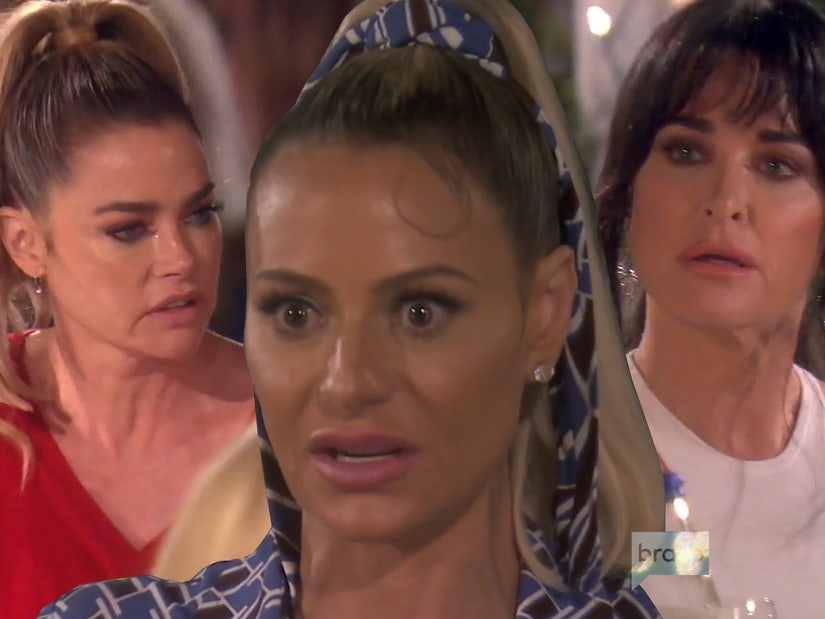 The women also spilled on threesomes and hooking up with other women, much to Denise's shock.

Kyle Richards snapped on Wednesday's episode of "Real Housewives of Beverly Hills," which saw her go at it with Dorit Kemsley, say mean things about Denise Richards under her breath and tell Lisa Rinna to "f--k off" during a tense dinner confrontation.

The tension stemmed from a wellness retreat Teddi Mellencamp-Arroyave was holding. After some drama about whether or not she really wanted her costars to attend, Kyle, Erika Jayne and Sutton Stracke made the long trip down to Laguna Beach -- with Dorit and Denise saying they'd show up late for lunch and dinner, respectively.

When Dorit showed up as lunch was being served, however, she strolled in in full glam and rocking Balenciaga workout wear ... despite not planning to work out at all. That aggravated Kyle.

"I knew that Dorit was coming late, but clearly she was in glam for hours," she said in a confessional. "Is glam the reason that she had to come late today, really?"

Kyle and Dorit began to hash it out in their hotel room, where Dorit exclaimed, "Kyle, I have a f--king life," as her reasoning for being late. Kyle was shocked, asking her, "I don't?" and calling her both "shallow" and "selfish" in a confessional.

The topic kept coming up throughout the rest of the day, but really came to a head the following day at a pizza party held by Denise at her new Malibu pad.

Dinner talk started light enough, as the ladies talked about whether they had ever been with another woman. Denise, however, was shocked by the conversation -- clutching her pearls as she said, "Wait, my kids are over there!"

"I never did the lesbian thing," revealed Kyle. Added Garcelle Beauvais, "When I was modeling. I just made out with a girl. When you're young, you're modeling and you're free, things happen. I kissed a girl and I liked it."

"I was with a couple," said Erika, as Denise, star of "Wild Things," got more flustered. "I had dated someone that had married someone I knew, so when they became a couple, we went out on a date and I could tell where everything was going. I could tell they were into it and fine, so was I."

"I've never been with a girl, I've only been with a couple," she added. "There's a penis and two vaginas."

Cue Denise: "Oh my god, I gotta get my kids out of here!"

Dorit used the conversation as an opportunity to bring up the fact Kyle and Teddi shared a bed during one of their cast trips. "Apparently, I'm a lesbian," Richards said in reaction. Dorit then said Kyle has a "blind defensiveness" of Teddi, which brought it all back around to her retreat tardiness.

After Denise told Kyle to stop "judging" Teddi, Kyle was then caught making nasty comments about Denise under her breath. "This one, who's never worn anything but a f--king mop top ponytail her whole life," she whispered to Sutton, before calling Denise a "ragamuffin."

"It's not a mean word but it wasn't said in a nice way," she later admitted on Twitter as the episode aired. "Not nice. Denise is beautiful no doubt The margaritas, exhaustion & emotions not bringing out the best in me."

When Dorit said Kyle wouldn't defend her the same way she does Teddi, Richards erupted. "I defend you all the f--king time," she said, as footage showed her fallout with Lisa Vanderpump over Dorit. "I would defend all my girlfriends because I'm not friends with assholes. I would defend Rinna."

"Not always," Rinna said, stirring the pot. "When it's your sister."

Kyle was shocked Lisa went there, but said she even defended Rinna at the expense of her relationships with her family. "So f--k you, f--k off," she shot at Lisa.

As Denise tried to get Kyle to back off -- telling her, "Don't tell [Rinna] to f--k off ... that's not nice" -- Kyle had had enough. "Denise, leave me alone please, I'm not doing this, I'm not" she exclaimed, in tears, as the episode ended.

Kyle further explained her behavior on social media as the show was airing.

"First of all , I was not upset with Dorit in the beginning," she claimed. "I just don't get putting vanity/ glam before friendship. It all went south when she said she had a f--king life."

"In an attempt to get back at me for calling her out, Dorit tried 2 make an issue out of Teddi sleeping in my bed one night in Provence," she continued. "I mean if anything exciting had happened I'd be happy 2 share. But I am attracted to men. Especially my man. And Teddi is like a little sister."

"It felt like everyone was against me and I was too tired and emotional to deal with any of this," she added, saying she should have left the event sooner.