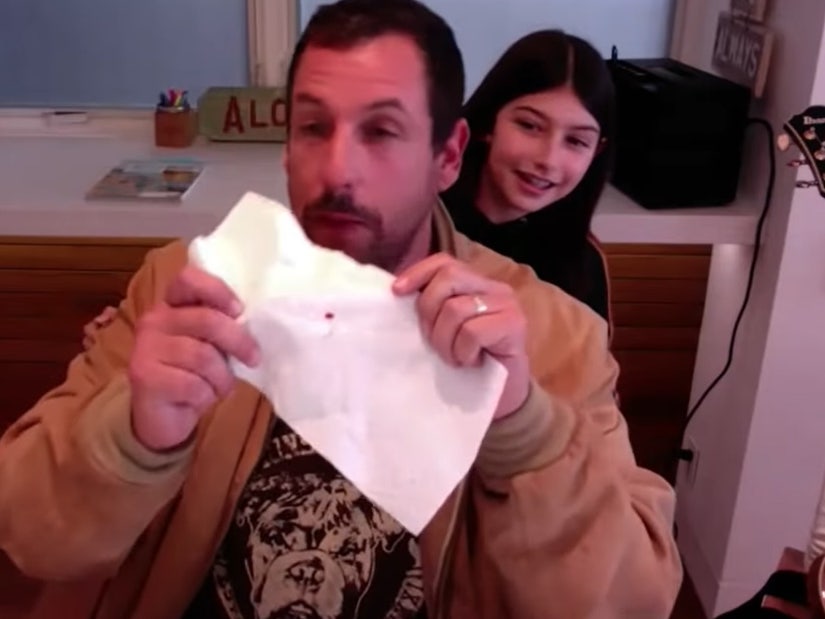 Sandler also spills on his takeout woes and "the worst thing about this quarantine."

With celebrities continuing to do interviews from home during coronavirus lockdown, their kids keep popping up on screen to steal the show.

"I had a hair coming out of my ear apparently and Sunny told me about it, she told me I looked goofy so I went and shaved," explained Sandler, as she stood by his side. "I took the razor I usually shave with and went like this, then I came downstairs and said, 'How's that Sunny?' and she said, 'You're bleeding.'"

Sunny said she told him "it's bloody" and there was a "big gut" on his ear.

Sandler then took a piece of paper towel and dabbed it behind his ear, showing how it was still bleeding. "There's a little blood, but we're calming down sweetie!" he exclaimed, before telling her to go do some homework and "get away from daddy so he can talk dirty."

Speaking with Kimmel, Sandler said it's certainly been a little different having his kids around in his office all day as they go to school from home.

"I'm in the middle of their school every day, so I gotta quietly talk to people and I'm typing things while they're doing their work and stuff and not understanding any of it," he said, explaining that his desk was situated between his two daughters'. "I peek my head in and say hi to the teachers," he added. 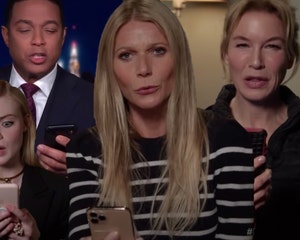 Kimmel quipped that Sandler was actually "designed for quarantine," because he doesn't "like to go places" on a regular day. The comedian, however, countered that he at least likes having the power to "say no" to an event himself -- joking, "I don't like being told by this pandemic you can't go anywhere. It's cooler to say no."

During the interview, Sandler also explained recent paparazzi photos of him doing half-pushups in his driveway -- acknowledging they make it look like he has no idea how to do one properly.

He then detailed a recent adventure to get Chinese food during lockdown, explaining how he forgot to bring his face mask with him, leading to a standoff between him and the woman with his food.

Sandler ended the interview by revealing "the worst thing about this quarantine," in his household at least.

"It used to be when I snapped in the house, I'd get thrown out," he cracked. "My wife would be like, 'You better go, you're acting nuts,' and I would leave. Now, it's like, get the hell out, and hang on let me get you a mask and gloves and by the time I get the stuff to leave, she's like alright just stay."