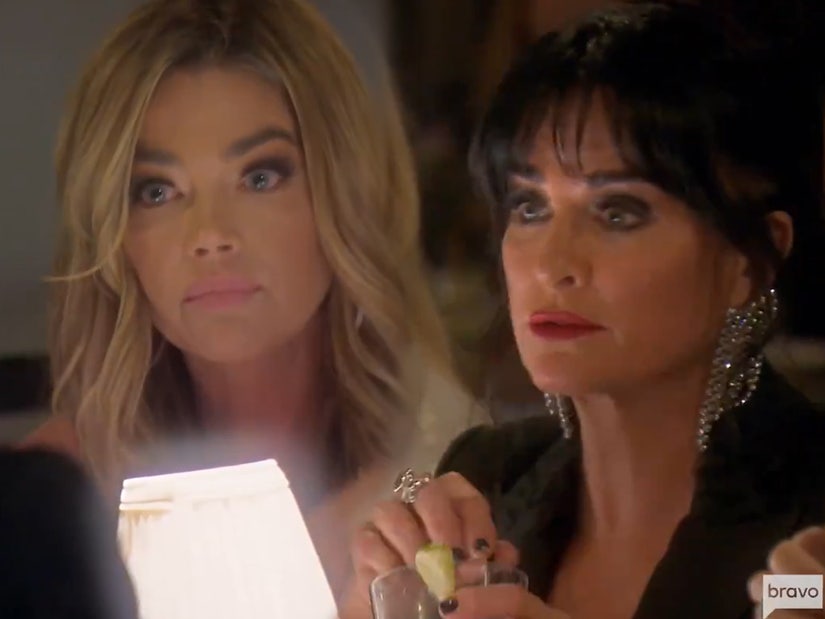 "I am f--king Denise Richards, Kyle," she exclaimed. "I don't think these bitches know, I've been on every f--king magazine cover you could possibly imagine that they would want to be on."

They may be costars on "Real Housewives of Beverly Hills," but it's sure starting to feel like Denise Richards and Kyle Richards don't really like each other all that much in real life.

Wednesday's new hour ended with a nasty showdown between the two, but comments they made about each other during throughout the episode only added to the less-than-friendly vibe.

The new episode kicked off with the fallout from Kyle's breakdown at Denise's pizza party. She stormed out after Lisa Rinna accused her of not always standing up for the other women -- especially when her sister Kim was involved. FYI: Before Kyle left, she was once again overheard criticizing Denise's appearance, calling her a "ragamuffin" for the second time. 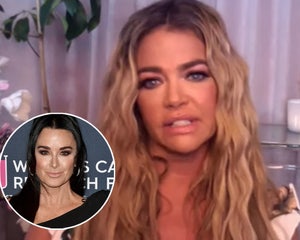 The next day, Denise met up for coffee with Erika Jayne, who tried to blame Kyle's meltdown on all the "pressure" she's under. But Denise wasn't having it in a confessional.

"I am filming in Los Angeles, I got an ex-husband I'm dealing with, I got a kid with special needs, I gotta pay the bills," said Denise. "Bitch, we all have a lot going on, that's not an excuse to be an asshole."

During the coffee date, Erika also apologized for talking about threesomes in front of all the kids at the party, after Denise said daughter Sami overheard the NSFW conversation. Richards then said Kyle was also the only one in the cast who didn't respond to her group text message thanking them all for coming to the party.

The swipes kept coming as all the women assembled at Erika's posh "clubhouse" before attending a party for Rinna's daughters' fashion line. At the clubhouse, Kyle suggested they all to go Santa Barbara for a weekend trip to celebrate her wrapping "Halloween Kills."

"What does Kyle want? A f--king medal?" Denise said in a confessional. "I shoot about 10 episodes of Bold and the Beautiful a week. Want to know how I celebrate? I cook dinner for my kids and I memorize my lines for next week."

At the pre-party gathering, Lisa also apologized to Kyle for bringing up Kim during the heated dinner conversation at Denise's. Kyle accepted the apology, though also felt Rinna was just trying to smooth things over so nothing blew up at her daughters' party.

At the event, Kyle apologized to Denise for leaving her pizza party early. While Denise accepted it on camera, she told a different story in yet another shady confessional.

"I love Kyle's half-assed apology, because she doesn't give a shit what I have to f--king say, only cares about getting her point across," said Denise, "and I find that really f--king selfish."

The rest of the party went off without a hitch, though Sutton Stracke had a near freakout herself over Rinna's makeup artist. Apparently, Sutton and the guy had a bad falling out over a business venture and warned Dorit Kemsley she'd "flip out" if he was there. He wasn't, but Dorit stirred the pot by exposing Sutton's comment in front of everyone at a dinner after the event.

Dorit said it was "an inappropriate time" for Sutton to bring up the situation with Rinna's makeup artist, as Rinna freaked out over the idea of Sutton causing a scene at the event (which, remember, didn't happen). Stracke felt ganged up on and started crying, before Dorit then set her sights on Kyle.

Dorit circled back to Kyle's comments at Denise's house, where Richards said some of them weren't honest and called some of them "fake ass bitches."

Denise said there's a "f--king problem" when the kids' table at her house was acting more mature than them at the event. It was then Erika's turn for a confessional diss, as she said, "I've apologized, there's nothing else I can say. If you want to pretend to be Mother of the Year, go right ahead."

"I want to know, who is a fake ass bitch?" Denise directly asked Kyle, who said she thinks "everybody has that potential."

She then gave an example of how she felt Denise was being fake. "Even you Denise, who was down to earth, no makeup last year, you're all of a sudden getting glam and having a diamond ice sculpture at your house," said Kyle, "Everybody's so full of shit."

"Who gives a shit if I have a goddamn ice sculpture?" asked Denise, incredulous. "It just seems like that's not how you were before," Kyle hit back.

"Why am I fake because of that?" she then asked Kyle. "I've been an actress in this business for a long time. I've done glam. Half the time you guys see me, I'm coming from f--king set."

She then continued to go off in what may just be one of the best confessional comments of all time.

"I am f--king Denise Richards, Kyle," she exclaimed. "I don't think these bitches know, I've been on every f--king magazine cover you could possibly imagine that they would want to be on."

Back at the table, Denise then criticized Kyle for speaking over her. "Do you realize you don't let some people talk? You talk at us sometimes and not to us and you don't listen," she shot at Kyle. "You need to be quiet! Stop! Do you ever let people talk!"

"I want you to talk, but not being an asshole," Kyle said, before Denise exclaimed, "I'm not f--king doing this." Rinna thankfully broke the tension by joking it was probably time to take her 91-year-old mother home and the episode came to an end.

As for why Denise really hasn't been holding back in her confessionals, we're going to venture a guess and say most of them were probably filmed after the group splintered over the Denise-Brandi Glanville hookup rumors. She's got some serious shade to release ... and it's been wildly entertaining so far.