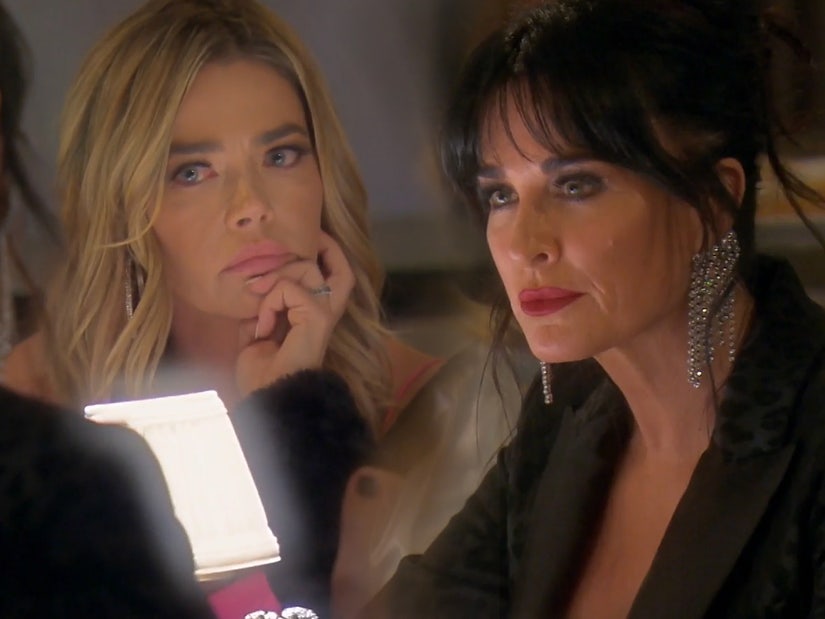 Kyle reveals why she felt one moment between Denise and her daughter wasn't exactly authentic.

While the "Real Housewives of Beverly Hills" used to post blogs reacting to each episode's drama, they've now begun live-tweeting the show weekly ... and it's been a goldmine of behind-the-scenes intel.

Kyle Richards appears to be one of the most active on Twitter -- revealing on Wednesday night that they've been "asked to tweet instead of blog" by Bravo -- and has not been disappointing.

In the latest episode, she and Denise Richards really went at it, both to each other and in comments made behind the other's back. Kyle once again called Denise a "ragamuffin," while the "Wild Things" star said Kyle was acting like an "asshole," called her "selfish" and basically said all the women were jealous of her years on magazine covers.

During one shady confessional, Denise reacted to Kyle suggesting the cast take a trip to Santa Barbara to celebrate her wrapping production on "Halloween Kills."

"What does Kyle want? A f--king medal?" said Denise. "I shoot about 10 episodes of Bold and the Beautiful a week. Want to know how I celebrate? I cook dinner for my kids and I memorize my lines for next week."

"I don’t need a medal for  parenting and working Denise," Richards responded on Twitter. "Just inviting the ladies away for some fun and maybe reconnecting."

A lot of Kyle's drama on the show so far has revolved around her criticizing Dorit Kemsley for showing up late to a wellness retreat Teddi Mellencamp-Arroyave was throwing. Though Dorit warned Teddi she would show up after everyone else, Kyle was frustrated it seemed like the only reason she didn't arrive when they did was because she was too busy doing glam.

As the fighting between her and Dorit continued last night, Kyle gave a little more insight into why it set her off so much -- and said some of her cast mates felt the same way but didn't back her up on camera.

"re the 'glam' situation ... we don't address the fact that there are cameras following us so some things are hard 2 explain," she tweeted. "When we all sign up for this we make a commitment to open our lives & show up. I had flown home from N. Carolina to honor my commitment to RHOBH."

"I didn't get to see my family or drive Portia to school because we had to leave our homes at 5am to meet up to all drive together to Teddi’s retreat," she added. "I didn't get the coming late for glam especially when it was an exercise and meditation retreat."

"If she did not want to show up on time for Teddi I would have thought she would at least have to [show] on time for her commitment to RHOBH… Like we all had to," she continued.

When Kyle said she believes the situation wouldn't have escalated had it stayed between her and Dorit, Kemsley herself chimed in on her own feed.

"You were happy to get people involved until 2 people didn't agree with you," tweeted Dorit. "And making up a story about me being late because of glam and being mad about me glamming in the 1st place feels like an attack for no good reason. We're supposed to be friends."

"In 10 years I have not repeated things that people said to me off camera," she tweeted. "Some people agreed with me about Dorit but didn't speak up at the table, instead of saying it in the moment I felt hurt and frustrated."

She also tweeted at Dorit, saying she "didn't want to say what people had already said to me."

Teasing the drama to come, Kyle said it's "going to be a rough ride for me apparently" this season, adding there's "lots of agendas" in the mix.

That being said, she added, "This ain't my first rodeo."