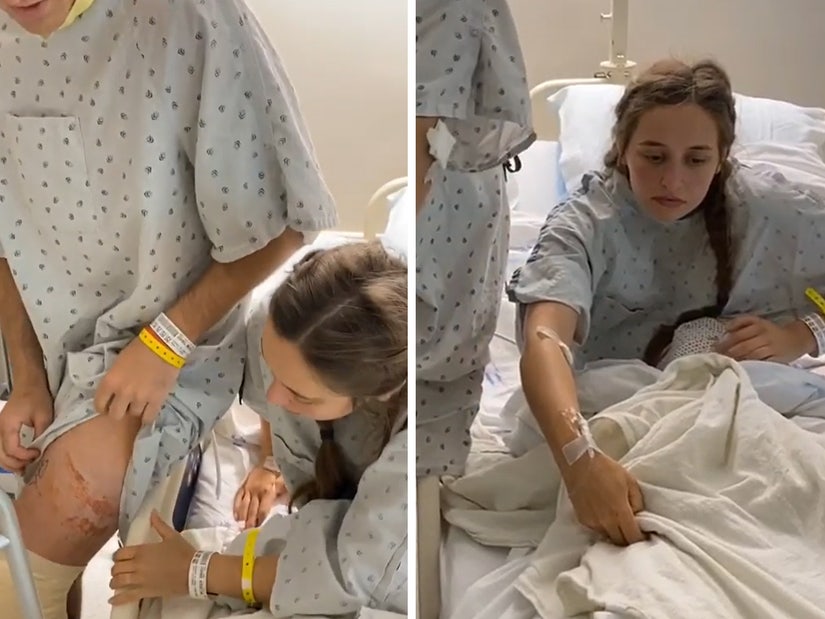 The two give promising updates from the hospital, after Marcus previously claimed driver "was trying to actually kill us."

Marcus and Kristin Johns are in recovery and chronicling their hospital treatment on social media after surviving a "horrible" hit and run.

The two YouTube stars were injured on Monday night while on a bicycle ride and rushed to the hospital, with Kristin initially saying her femur was "snapped in half" in the accident, while Marcus' lower leg was broken.

On Wednesday, the two posted new updates to their respective Instagram accounts as each tried to walk for the first time following their injuries.

"I just had my first physical therapy session and it did not go as planned," said Kristin on her Stories. "I thought maybe I would be able to stand with a walker, but even to stand at the bed was excruciating and I'm on heavy pain medication right now. My knee, my femur and my hip is what's killing me. I know I have to take it one day at a time, I'm in so much pain, I'm thankful I'm able to move at all."

She later shared another video from a second physical therapy session where she was able to stand.

"I stood today!!!!" she captioned the post. "I was able to take about 5 steps which is CRAZY! I am so motivated to get up & walk with a walker because then we can go home & be with family."

"Due to the pandemic we are not allowed to have visitors so FaceTiming my friends & family (& Marcus from the other hospital room) has been a life saver," she added. "Also I am going say it again & again, thank you Jesus for saving our lives."

Early this morning, Kristin also said she was experiencing some neck pain, while expressing shock that the driver who hit them was allegedly "going 60-80 miles per hour, the police said." She then joked that, despite her injuries, her braids were "holding on strong."

On his own page, Marcus shared a video of his progress, as he was seen walking with a walker to Kristin's hospital room.

"This is our first time together," he said in the video. "We're together for the first time in 2 days and we are alive and good, that's what matters."

The two then showed each other their injuries, as he lifted up his hospital gown to reveal his roughed up leg and fingers and she showed him her "broken" toes.

"Day 3 update. I’m waking with a walker! Your prayers are working," he wrote in the caption. "Pain for both of has been up and down. Best and worst it's been so far. Just taking a day at a time. Would love to be able to put my full weight on my leg but my upper body is doing most the lifting as of now. Either way, I’m mobile and they are saying I will likely be discharged tomorrow!"

"Please pray that Kristin is able to stand and walk a little so we can leave together at the same time," he continued, before thanking friends, fans and family for their support and the hospital staff for their care.

"The detective police and first responders have all been amazing and very supportive through this difficult time," he added. "As of now the person who hit us is still out and about as of now, but more details to come soon. I will update when I can. A lot more details have come to light. Very weird stuff. I will let you know when I can. More to come!"

In another video earlier this week, Marcus claimed the car was "apparently part of a burglary and was trying to run from the cops." He added that they believe they were hit "on purpose to try and get the cops' attention away from him so he could get away."

"We should have died in that thing," he added, saying the two were "so blessed to be alive."

In the caption for the post, Marcus said he recalled the car "driving erratically and swerving towards us" before he was hit. He then blacked out until he got to the hospital.

"Sadly Kristin was fully conscious and had to watch me unresponsive on the concrete till ambulance arrived for us," he added. "Kristin said we flew about 50 feet from the impact. When I woke up and was trying to explain what happened, and I didn't think people would believe me that I was convinced he was trying to actually kill us. But now it all makes sense if the robbery and police pursuit is officially confirmed. Anyways, scary stuff."

Kristin shared her own tearful video from her hospital bed, saying they were in a "horrible bicycle accident."

"I just have to tell you guys that Jesus saved our lives and there's no question about that," she added. "This is an extremely traumatic experience. Keep us in your prayers."