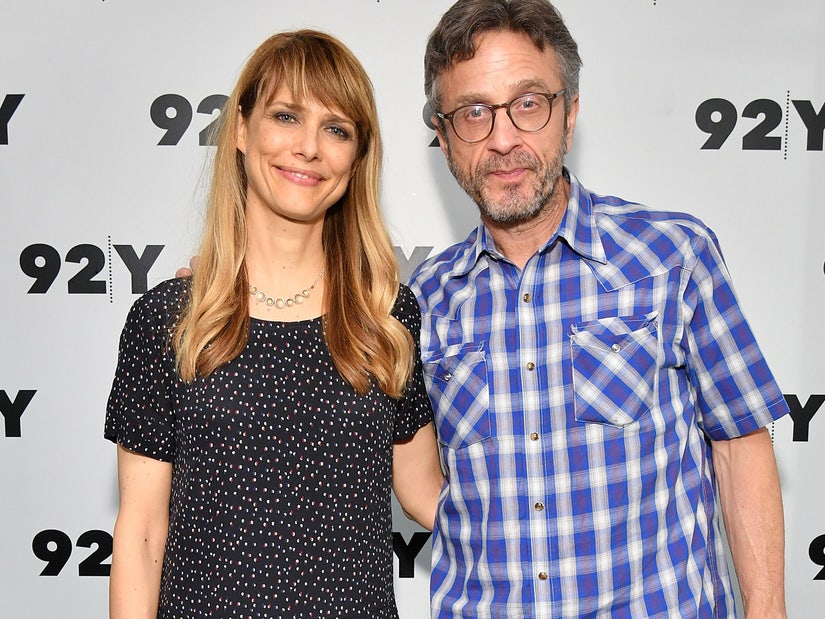 "I was just always better. I was definitely a better person when I was engaged with her."

Hollywood is in mourning after the tragic passing of "GLOW" and "Little Fires Everywhere" director Lynn Shelton, who unexpectedly died on Saturday, May 16 at the age of 54.

Shelton, who also helmed the feature films "Humpday" and "Your Sister's Sister," died of a blood disorder. Her passing was not COVID-19 related.

"GLOW" star and Shelton's boyfriend for the last year, comedian Marc Maron, put raw emotions on the table during the new episode of his WTF podcast on Monday, recorded after her death. According to Maron, she collapsed in the middle of the night on Friday, an ambulance came and it was "the last time I saw her alive."

"I imagine most of you know that Lynn Shelton died at about 12:45 AM on Saturday morning," he began, choking up as he spoke. "She was my partner, she was my girlfriend, she was my friend and I loved her. I loved her, a lot. And she loved me. And I knew that. And I don’t know that I ever felt what I felt with her before. I do know, actually. I did not. I have not. I was getting used to love in the way of being able to accept it and show it properly in an intimate relationship."

Admitting he has a hard time being comfortable "emotionally" with others, that wasn't the case with Lynn. "I made her laugh all the time, she made me laugh, we were happy," he added.

According to Maron, they initially believed Shelton had strep throat. As her illness continued, she took a COVID-19 test and it came back negative. When the issue persisted, she made another doctor's appointment.

"We were going to go into the doctor for blood tests on Friday. And then in the middle of the night I heard her collapse in the hallway on her way to the bathroom, and I got up and she was on the floor and she couldn't move," recalled Maron. "She was conscious but delirious a bit. I called 911, they came, and they got her, and that was the last time I saw her alive, was on the floor being taken away."

"Then over the course of the day there was never any good news. She got there, she was anemic, she had low blood pressure, she had internal bleeding, and I don't want to go into details about that day, but they tried very hard at two hospitals that were amazing, and they eventually had to let her go," he continued. "They tried everything they could, they took her off life support, and she passed away."

Maron said he was able to see her in the hospital after her passing. "I told her I loved her, I touched her forehead, and I left," he added. "And now, this process is happening."

He also opened up about all the love he's felt from others since her death, saying it proved "nobody's got anything bad to say about Lynn Shelton, that's for f--king sure."

Maron then played an interview he did with Shelton back in 2015, the first time they met in person. While he didn't know her at the time and was simply a fan of her work, he felt their instant connection was "undeniable."

"I was always better, I was definitely a better person when I was engaged with her," he said. "As a comic, as a guitar player, as a human, as a lover, everything. I was better in Lynn Shelton's gaze. She was so great."

Admitting he wasn't even sure he should be speaking about her death so soon, Maron added, "But this is what I do and this is where I'm at and there's no right or wrong with grief. It comes in waves. I just know that this person has touched so many lives."

"Shouldn't everyone be so lucky to make that kind of impact on so many people, so many lives, so many people loved her for so many different reasons," he added.

Calling her death "a horrendous loss to a lot of people," he added, "I guess we'll get through this."

"I loved her very much as I know many of you did as well. It's devastating. I am leveled, heartbroken and in complete shock and don't really know how to move forward in this moment," he said in a statement. "I needed you all to know. I don't know some of you. Some I do. I'm just trying to let the people who were important to her know."

"She was a beautiful, kind, loving, charismatic artist. Her spirit was pure joy," he added. "We were starting a life together. I really can’t believe what is happening. This is a horrendous, sad loss."

Shelton is also survived by son Milo, who she shares with ex Kevin Seal.