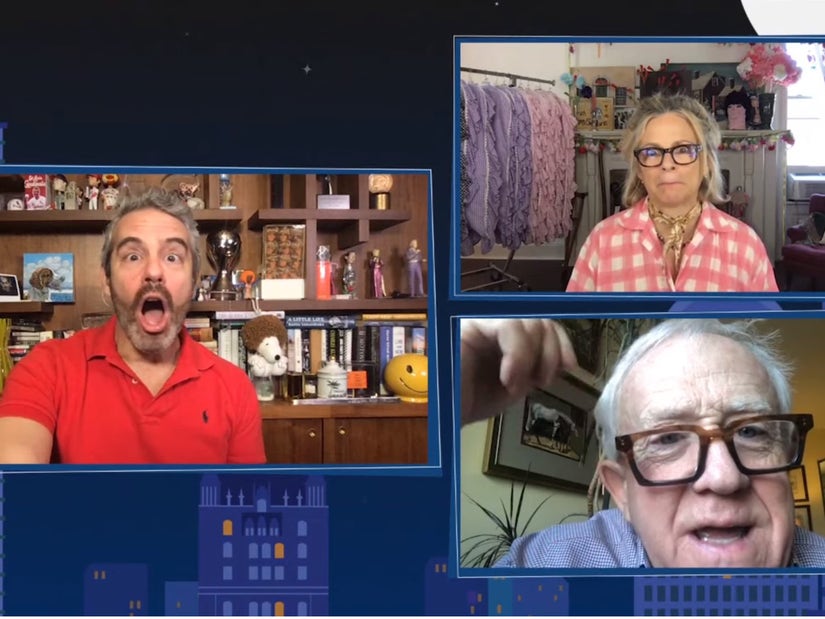 The actor and social media sensation shares his unlikely encounter with the Marvel star, getting dissed by Faye Dunaway and what he looks for in Hollywood hunks on "Watch What Happens Live."

"American Horror Story" star Leslie Jordan is just as surprised as anyone else that he's become America's sweetheart during the COVID-19 pandemic but anyone who's enjoyed his Instagram feed can see instantly what the appeal is.

The 65-year-old comedian has always been a hoot on our screens, appearing in countless movies and television shows over the years, stealing every scene he's been in. If you don't believe us, just watch any of his scenes with Megan Mullally's Karen on "Will & Grace."

But it's when he emerged simply as himself on social media that people really flocked to him. His was the gentle, sweet and kind voice of humor and silliness that so many need during times of uncertainty.

During his appearance on "Watch What Happens Live," fellow guest Amy Sedaris went so far as to say Leslie's IG feed is one of three things that are helping her get through quarantine.

"I just want more, and I look forward to you every single day," she said. "And I've never felt that way about anybody's Instagram. I really don't know what I would do without you."

Leslie admitted that his sudden social media success has caught him by surprise. Admitting that he was excited to have 80,000 followers, thinking that was a lot, he still can't quite seem to believe he now has 4.5 million.

Anyone who's see the videos, though, knows exactly why. They're just so pure. And without even realizing it, Leslie has made sure they stay that way by how he's chosen to produce them.

When asked, Leslie explained why it was so important to him not to go back and try for a second take. "When I do it over again and it's scripted it's just not as good," he said. "Even if I mess up as when I just do it."

Not everyone is as into Leslie Jordan as most of us, though, as evidenced by a hilariously bizarre encounter he shared when Andy Cohen asked him if he was willing to double down on his IG assertion that Faye Dunaway is "batshit crazy."

According to Leslie, he ran into the actress at a newspaper stand not too long ago and greeted her.

"She goes, Yes? Nothing. Didn't recognize me, didn't remember me," Leslie said. "And so I said, I was on a series with you for awhile. It was called 'It Had to Be You.' She said, You know, dear, that was a long time ago, and walked away."

The short-run series starring Dunaway and Robert Urich premiered and was quickly canceled in 1993, so it might be fair that she would have little recollection of it. Leslie, meanwhile, seems to have incredible recall, as he even remembered what corner the newsstand was on where they bumped into one another.

He reached back into the archives for another anecdote, though this one he was unable to absolutely verify, from his early television years. This time it was when he starred with George Clooney on another short-lived series, "Bodies of Evidence."

"I was on a diet and I kept telling everybody, you know, I'm on this new diet, I'm trying so hard," Leslie said. "George went to the wardrobe people and said, 'Does he wear the same suit every day? They said, uh-huh. He said, Take the pants out an inch every day."

Apparently, it worked, as Leslie said he couldn't believe what was happening. " I would come to work and I would say, oh my god, y'all, I'm not losing pounds, I'm losing inches. It's so amazing," he laughed. "By the third day, they were like hanging on me."

Of course, he finally found out what was going on. And even though he says George never admitted to the pranks, the actor is a notorious prankster and has been throughout his career. "When I accused him, he said it wasn’t him, but you know it was," Leslie insisted.

The story came out in a segment where Leslie was tasked with choosing who his "Daddy" was from a bevy of Hollywood hunks including Idris Elba, Liam Neeson ("I've heard rumors"), Brad Pitt, Dylan McDermott and many more.

One name that didn't make the list was Robert Downey Jr., but that didn't stop Leslie from sharing a hilariously odd story of a strangely close encounter he had with the actor.

Everyone knows RDJ had a bad boy era where he found himself in trouble with the law, but did you know LJ did as well? "I was sentenced in 1997 to 120 days for several indiscretions I'd really rather not describe right now," he shared. "Let's just say I haven't had a drink since."

He then hilariously described how he tried and failed to get into what he called the "homo tank," a gay section of the prison.

"They wouldn't put me in the homo tank," he said. "I'm the gayest man here. I fell out of the womb, I landed in my mother's high heels, why can you not--"

But according to Leslie, they were apparently doing it for his own good, because the so-called gay section was perhaps even more dangerous than the general population section.

And then, fate and happenstance created one of the strange celebrity encounters of all time.

"On Day 12 they said, we've got good news, you're out," Leslie said. "We don't have a bed for Robert Downey Jr. He's downstairs. You have to give him your bed and you're gonna get out."

So in a way, Leslie and Robert shared a prison bed, just not at the same time. They did, however, cohabitate briefly "in a little holding area," Leslie said. "I didn't really get to converse with him at all."

We can't help but wonder if Robert remembers that encounter. We get that it wasn't a great time for him, but what a strangely adorable encounter between two men struggling through a dark time in their lives who've both emerged as stronger and better versions of themselves.

Leslie next stars with Mayim Bialik in her new Fox sitcom "Call Me Kat." Originally slated for fall, he revealed that they've yet to even begin filming due to the ongoing pandemic, but he's excited about the 13-episode order.