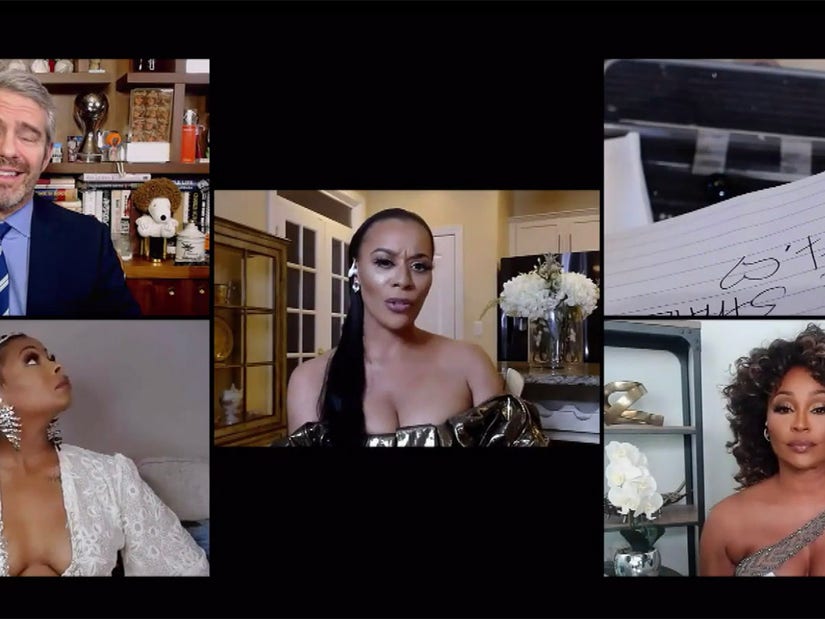 The final reunion episode was all about NeNe Leakes ... even after she refused to participate.

The "Real Housewives of Atlanta" virtual reunion came to its conclusion on Sunday night, in an hour dominated by NeNe Leakes' alleged role in SnakeGate, despite the complete absence of Leakes herself.

The reality star walked away from her computer in Part 2 of the reunion and didn't appear at all in the finale. Instead, her laptop camera stayed on, with her computer almost completely closed. Speaking to Andy Cohen, the women had some theories as to why Leakes stepped away from filming.

Eva Marcille pointed out that her exit came just "one minute" after Yovanna Momplaisir posted on Instagram that she was ready to "clear the air," with Kenya Moore saying, "She ran scared."

Andy was confused and relayed that Leakes told producers the show needed to "put respect on her name and that she is gonna leave her laptop on the porch."

Momplaisir then took the stage, addressing the SnakeGate drama that played out over the last season. It was alleged someone had recordings to Cynthia Bailey talking smack about NeNe behind her back, but the audio never surfaced. Leakes eventually said Yovanna was responsible for the rumor.

"Over the past couple of, two weeks, not only have I been receiving threatening text messages, harassing phone calls with [NeNe] calling from blocked numbers and just two days ago she sent me a letter from her attorney, a cease and desist," Momplaisir claimed on Sunday's reunion. "In her cease and desist, her attorney's verbiage was I needed to destroy any alleged audio that I might have on her that would portray her in a negative light or defame her character. I've never recorded NeNe, but clearly she's afraid of the truth coming out today."

Saying she decided to appear on the reunion to "clear my name," Yovanna claimed NeNe saw "an opportunity" when she started to befriend the other women. According to Momplaisir, Leakes wanted her to "find out if anyone was talking shit about her."

"So basically you were a snitch?" asked Tanya Sam. When Andy asked whether Leakes told Momplaisir to record conversations, she said, "Absolutely."

"Once she realized that my words were not good enough, she wanted proof of conversation," she claimed. "I'll be honest, I wasn't comfortable with that. It went completely against my moral being. But she was so pressed and thirsty for information, I basically told her what she wanted to hear. This is where I take full accountability. When she asked me, I led her to believe I actually did it, but I didn't."

Yovanna claimed NeNe only only wanted her to record Cynthia, but "every single body that's sitting right here." She added, "She wanted proof that everybody else is equally talking shit about her the way she talks shit about everybody else."

She even said NeNe specifically sent her Porsha Williams' contact information, so she would "reach out to you to also find out what kind of dirt you would say."

Andy and most of the women wondered how they could be sure Yovanna was telling the truth. Her proof was the fact NeNe refused to face her at the reunion. "It's interesting NeNe is not sitting here," said Yovanna. "I was actually looking forward to dissecting this entire thing with her here. That is proof enough. I have receipts, I have text messages."

As for why she waited so long to expose NeNe's alleged behavior, Yovanna said she thought they were still friends. "The only reason I hadn't said anything is because I didn't know NeNe officially threw me under the bus until she did her confessional," she added.

Cynthia found NeNe's absence very telling, saying, "It's all I need to see." When Cohen then asked the entire group who believed Yovanna, Kenya, Eva and Cynthia raised their hands. Kandi Burruss was on the fence, while Porsha admitting to having "more questions." Tana and Marlo Hampton didn't buy it at all.

While Leakes never showed up, Porsha did call her after Yovanna's interview and relayed their belief Momplaisir scared her off. Andy asked her to return to her laptop, but she never did.

After her exit last week, Leakes turned to Instagram to explain why she walked away. She said she was tired of Cohen bringing up things that happened after the show wrapped and claimed she was blindsided by production.

"Here they go bringing someone on the reunion that I was personally told by executives wasn't allowed on set anymore," she wrote, likely referring to Momplaisir.

According to TMZ, this isn't the last we've seen of Yovanna. She'll reportedly return next season as a RHOA cast member. NeNe has yet to confirm whether she'll return.