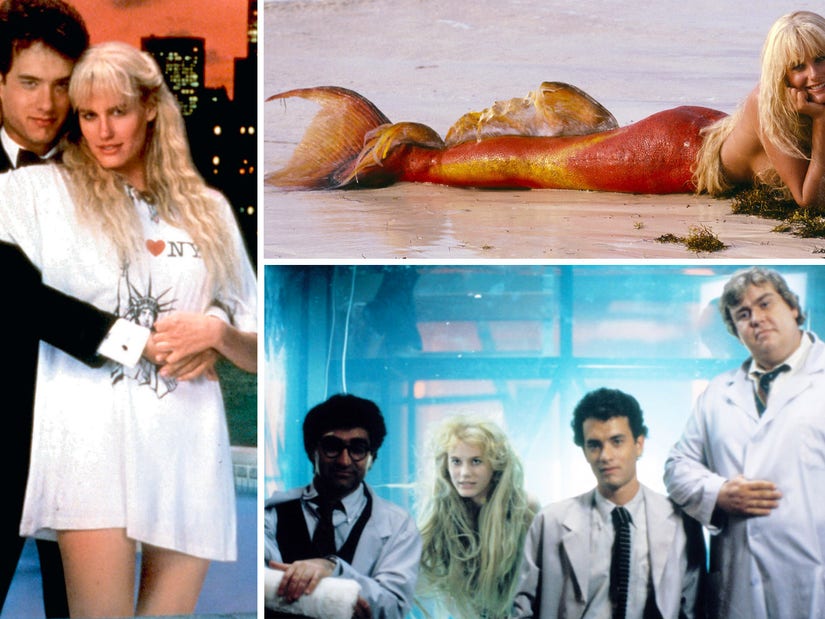 Josh Gad's Reunited Apart series continues with the 1984 Ron Howard classic and a tribute to the late John Candy.

While Ariel usually gets all the attention, another little mermaid from the '80s got the spotlight on Tuesday.

For the third episode of Josh Gad's Reunited Apart series -- which has already brought the casts of "The Goonies" and "Back to the Future" together again -- the actor recruited Tom Hanks, Daryl Hannah, Eugene Levy, director Ron Howard, producer Brian Grazer and writers Lowell Ganz and Marc "Babaloo" Mandel to look back at making the 1984 hit "Splash."

The reunion was done in support of Dig Deep, a non-profit hoping to provide all Americans with clean running water.

In the '80s flick, Hanks' Allen Bauer falls for a mysterious woman who transforms into a mermaid named Madison (Hannah) whenever she gets wet.

Grazer and Howard were the first to join the call, explaining how the movie came about. According to Grazer, Howard didn't want "Splash" to be his first film, but promised he'd do it after making the R-rated comedy "Night Shift." Howard said the studios kept turning them down because Warren Beatty was also working on a mermaid film at the time, but Disney gave them the green light when he swore he'd do anything to get theirs released first.

Hanks then popped up -- joking that, at the time, "Disney looked like a junior college that was underfunded" -- before Hannah joined as well. She said it was the first time they had all seen each other in 30 years.

"There was an audition and I had been actually trying to develop a live action 'Little Mermaid,'" recalled Hannah. "I remember when they told me about it, I went, 'A comedy?' Because 'The Little Mermaid' is a tragedy. I read the script and it made me laugh so hard, I fell in love with it. I went over to Disney, I'm not very good at auditions, I don't know how I got it."

While their chemistry is a big part of the film's success, Hannah noted she was "terrified" at the time. "Even though I was 21, 22, I still hadn't had a boyfriend," she remarked, "I was terrified about the kiss."

Another daunting aspect of production: all the underwater scenes, in which the film's stars appear without oxygen masks. "Tom and I didn't have masks so we couldn't really see," said Hannah. "So it was hit or miss whether we got the signals."

Noting that everyone became a scuba diver working on the film, Hanks said "that was one of the best great adventures of the whole thing, between going on vacation and getting paid to scuba dive."

Hannah's mermaid tail came with its own issues, with Hanks recalling his costar spending "hours getting glued into that very painful thing." After noting her toes were bleeding and banged up, Hannah said she still had the scars to prove it.

Hannah also had a personal problem with one of the movie's most iconic moments, where her character is seem demolishing a lobster tail while out to dinner. "The lobster scene is another example of why Disney is not the Disney of today," she cracked. "Because I'm a vegetarian, so I had to ask Ron and Brian if they could get Disney to make a faux lobster so I didn't actually have to eat a lobster."

Suffice to say, the prop lobster did not work and when a real one was plopped down on her plate, Hannah began alternating between nervous laughter and crying. "I had to go to my trailer and get made up," she said, before revealing the lobster shell was eventually stuffed with hearts of palm and mashed potatoes so she could eat it.

The gang then reminisced about working with the late, great John Candy. Recalling the actor showing up late to set one day, Howard explained Candy's amazing excuse.

While he wasn't in the film, fellow Canadian actor Ryan Reynolds joined the reunion to pay tribute to Candy, calling him "one of my favorite performers of all time." Expressing pride in his daughters being obsessed with "Uncle Buck," he went on to celebrate the "vulnerability" Candy brought to his work and said he suspected the comedian "had a beautiful soul."

Among the other revelations during the reunion: Eugene Levy was not a fan of all the casts he had to wear throughout the film, Ron can do an amazing impression of Madison speaking mermaid and a ton of little girls are proud to be named after Hannah's character, who really skyrocketed the moniker to popularity.

"I think it's really beautiful that it stands the test of time and speaks up for innocence and love in such a pure way," Hannah said when asked about the film's legacy. "Everything just clicked magnificently," added Hanks.

"Splash" is currently streaming on Disney+.