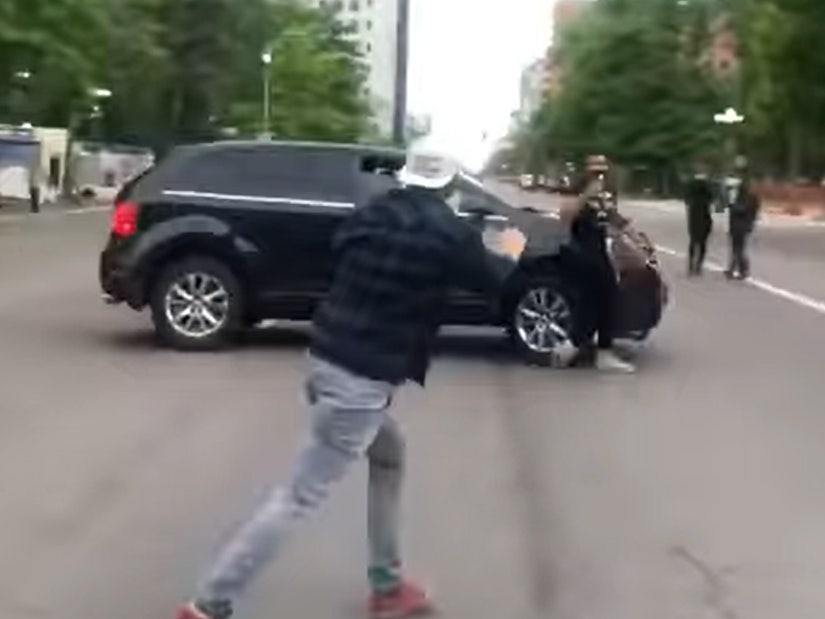 A protester in Colorado was lucky to escape with his life after being rammed by an SUV.

Shocking video from Denver on Thursday showed the man being thrown from the hood of the car, before the driver swerves and ploughs into him.

Like many cities across the US, protesters had gathered near the state capitol in the wake of the death of George Floyd, who died after a police officer was filmed kneeling on his neck for several minutes during an arrest for a suspected forgery.

Downtown denver. Some girl turned around to run this guy over #GeorgeFloyd #icantbreathe #downtowndenver #denver pic.twitter.com/eirohGGPr5

Crowds had gathered to block traffic at the intersection of Broadway and Colfax Avenue; while the witness footage doesn't show what led up to the incident, it appeared one female driver of a black SUV tried to force her way through the blockade.

A dozens-strong group surrounded the vehicle, with one kicking at the headlights, while another man jumped up on top of the hood.

As the car speeds away, the man jumps off the front of the vehicle and manages to stay on his feet as he scrambles away.

But despite having a completely clear road in front of her, the driver brakes and suddenly turns 90 degrees, back towards the man, who has his back to her and does not see her coming.

She then accelerates into him, ramming him to the ground, narrowly missing running his legs over as he crumples inches away from the front wheel. 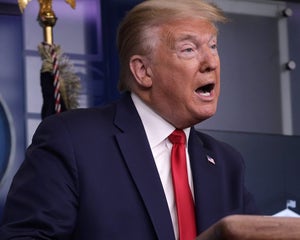 The driver then swiftly u-turns and flees the scene, as the furious crowd chases after her.

The man who was hit does not appear to be seriously hurt, as he scrambles back to his feet and chases after the car too.

Some commenters criticized the man for jumping on her car in the first place, claiming the driver simply panicked and hit him by accident.

But many more pointed out the fact that she clearly slowed and turned after him, despite having a completely free escape route from the crowd.

The incident was just one of many tense scenes in Denver, as protests turned violent into the night.

In one scary moment, hundreds of people were seen fleeing in panic outside capitol buildings after shots were reportedly fired.

Further protests are planned for Friday and Saturday.

NOW: #GeorgeFloyd protest in Denver now blocking I-25 as protest line confronts police behind me. pic.twitter.com/hedyQZsp79

Wow. Denver’s busiest interstate, I-25 is blocked off with protestors. The city joins the country in demanding for justice for #GeorgeFloyd https://t.co/33ZsoYeeaM

Breaking: 6-7 shots were fired in the direction of the Colorado State Capitol in Denver during a protest against the George Floyd killing. There are no reports of injuries. pic.twitter.com/8Fau1hnGKn