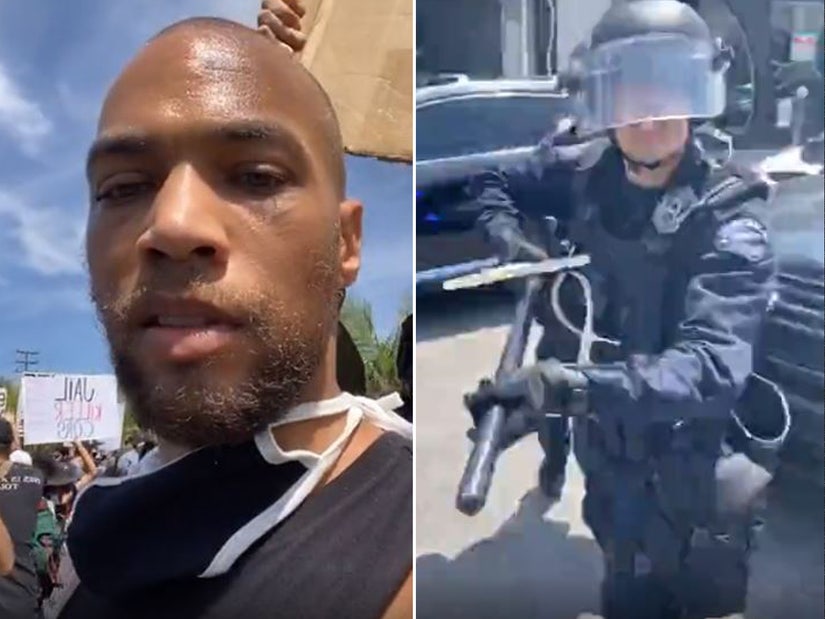 The chaotic scene took place after a protest over George Floyd's death.

"Insecure" star Kendrick Sampson was on the front line of the protests in Los Angeles on Saturday, joining a large crowd denouncing police brutality in the wake of George Floyd's tragic death.

The 32-year-old filmed the chaotic scene for Instagram, posting several videos which revealed tensions flaring between the protesters and the police, who were in riot gear and at one point began shooting rubber bullets towards the ground.

"They are the aggressors."

The 21-minute video shows the police lining up across the street when one of the them begins firing the rubber bullets.

According to CNN, most of the rubber bullets were aimed towards the ground, but one did hit a protester.

As the police begin marching towards the crowd, Sampson is hit by a policeman holding a baton.

A few minutes later, Sampson turned the camera on himself and said, "They started hurting people. Y'all saw this motherf--ker hit me. Hit ME -- with a baton, I'm unarmed. Then they started attacking girls. I have it on all on video."

"I was sitting there filming peacefully. And he targeted me out of everybody -- he started hitting me cause I was recording? I ain't being violent. I don't condone violence."

The actor also recorded one of the police cars vandalized with spray paint.

"None of these police cars were touched until they started hurting people," he said as he continued to film the car. "See that? That happened because they started f--king people up. I'm gonna let you all know right now."

Followers on his Instagram began commenting, wishing him well and sending support as they saw him at the protest on television.

"Literally watching you on tv right now being harassed. Please be safe 🙏🏽🙏🏽," wrote one concerned fan.

Another posted, "Bless you Kendrick! I just saw you on CNN it looks like they pushed you and shot you with a rubber bullet. Please be safe 🙏🏽"