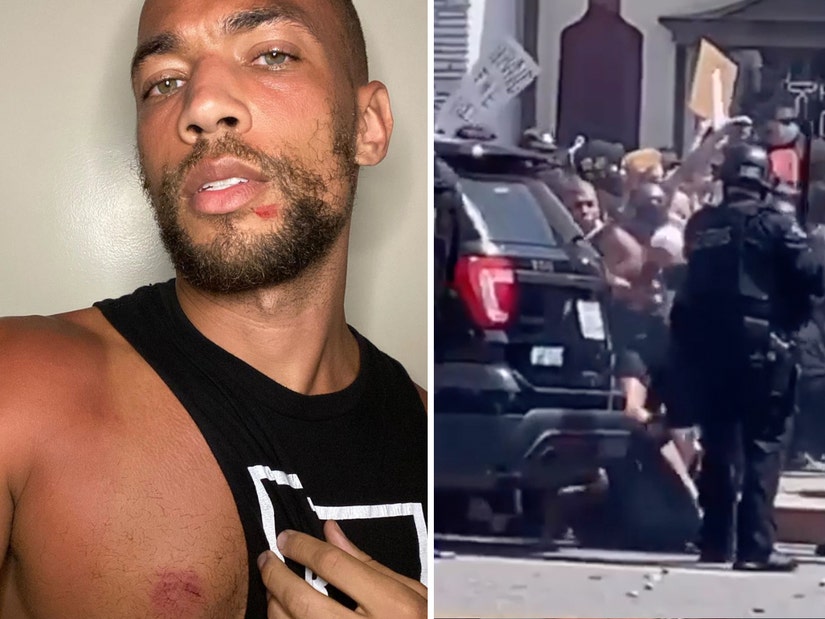 The "Insecure" star warns protestors to protect themselves after sharing images of his own wounds.

Kendrick Sampson was injured on the front line of protests in Los Angeles this weekend, during a demonstration denouncing police brutality in the wake of George Floyd's killing.

The "Insecure" star not only live streamed the protest on Saturday, but could be seen on CNN after tensions flared between the police and demonstrators. Sampson said he was shot by rubber bullets seven times during the incident and hit multiple times by batons.

After going to the emergency room, Sampson posted photos of his injuries to Instagram. "Before you swipe - If you're squeamish - warning - these are SOME my wounds up close," he warned.

"The most obvious are from rubber bullets. They look gross but I was blessed to be shot directly from close range and not have much worse," he explained. "These things HURT and are DANGEROUS. The dude was aiming for folks HEADS. Rubber bullets have killed folks and can cause permanent damage, brain damage, concussions etc."

He then claimed officers had removed or obscured their badge numbers during the protest, before calling for the defunding of police.

"Appreciate the outpouring of support & standing with us but if y'all really want to support, make sure we do EVERYTHING in our POWER to #DEFUNDPOLICE," he tweeted after his appearance at the protest started making headlines. "END THE LEGACY OF SLAVE CATCHING and use those resources, OUR RESOURCES to build BETTER. Make THAT the headlines. Put in WORK."

On Sunday night, Sampson shared another video warning protestors to protect themselves when they go out.

"Make sure you are protecting yourself, that you are putting on protective gear if you're gonna out there," he said, stressing the importance of having an escape route.

Explaining his desire to defund the police, he said he hoped to "actually put that money towards things and systems that care for our community like mental health care, unarmed, non-law enforcement first responders, housing the homeless and things that can help us care."

"Care, not cops," he added. "Defund the police and prosecute killer cops. Be safe, be careful, especially if you're black."

Protests erupted nationwide this weekend over the killing of George Floyd, a 46-year-old Black man, who died after a white police officer kneeled on his neck for several minutes in Minneapolis, Minnesota on Monday.