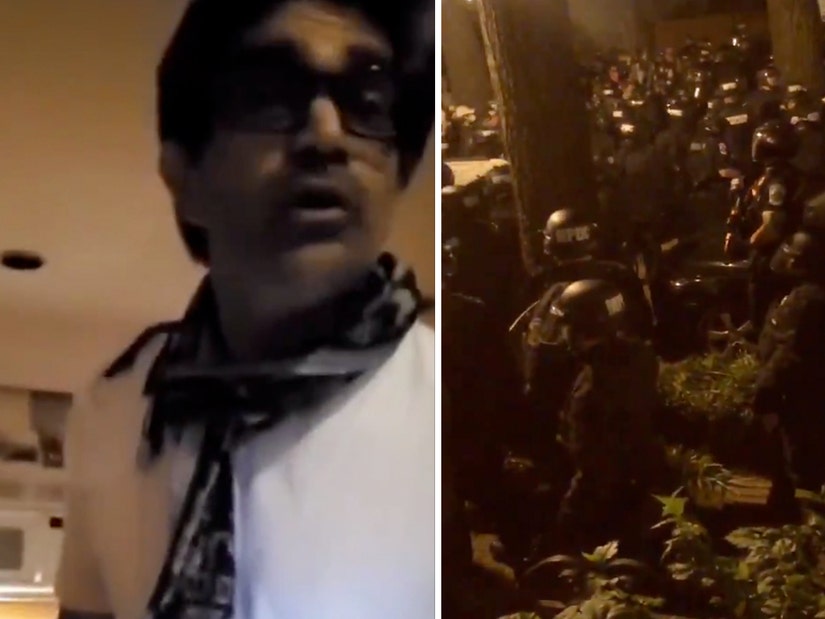 "I love this f--king country, and I love it because what's going on in my house right now."

A group of about 70 protestors in Washington, D.C. found themselves trapped in a stranger's home on Monday night, where they sheltered from police after curfew.

Rahul Dubey opened up his doors as police pushed protesters onto his street with pepper spray and flash bangs. Speaking with Esquire, Dubey said it was "like a human tsunami of people" bottlenecking near his stoop. "All I kept yelling was, 'Get in! Get in!'"

One video from inside showed a woman saying police believed they broke into his home, as Rahul said that wasn't the case and they were all welcome to stay the night.

rahul dubey is a fucking legend. he took protestors into his own home and saved them from police who had them cornered and were trying to arrest them. #SaveJenny pic.twitter.com/JRsyY1TzDw

According to the homeowner and Twitter videos of those seeking shelter, the pushback from police didn't stop once everyone was inside.

"They were shooting pepper spray in through the window," said Dubey, who also claimed the cops used "trickery" to try and coax protesters outside to be arrested.

THE POLICE BOXED IN A GROUP OF PEACEFUL PROTESTERS AND THEN STARTED HITTING AND MACING PEOPLE. A MAN TOOK SOME OF US INTO HIS HOUSE AND THE POLICE HAVE US TRAPPED. THERE ARE PEOPLE STILL TRAPPED IN THE STREET ON 15th AND SWANN pic.twitter.com/H2B2QCup1o

"They send decoys to the door, telling them they can't leave out the front, but if they leave out the back alley, they'll be safe," he said, claiming they even "hijacked the pizza delivery guy."

Eventually, they did get a big order of pizza delivered, which Dubey compared to a "covert mission" as he picked it up "over my back fence through police brigade."

Despite protesters saying it was peaceful, law enforcement said they had "an indication of an escalation of potential violence" in the area and believed some potential lawbreakers may have been in the house. After curfew ended at 6am this morning, the protesters were all able to leave the home without arrest.

owner of the house just addressed the protestors inside, said he asked the police for someone to talk to and they told him to “call 911”, said if we leave the house they’re putting us facedown on the concrete for violating curfew

Many inside the home documented the experience on social media and praised Dubey for opening his home.

Wrote one of the refugees, "I just cannot say enough about Rahul and the man he proved himself to be throughout the night. he deserves everything he wants in this life and more."

The night's events didn't shake Dubey's patriotism -- in fact, it did just the opposite.

"I love this fucking country, and I love it because what’s going on in my house right now," he told Esquire. "I got a Coca Cola commercial spread out from white dudes who are rapping to a couple of dudes smoking a J in the backyard to Asians to Latinos and another South Asian who gave me props to Blacks. Full on. We're all in it together. It's pretty cool."

Rahul Dubey, the man who welcomed protesters into his home, gets a round of appause from protesters and supporters @ABC7News @ABC7GMW pic.twitter.com/IDISrnPTcx

"Get home safe. Get some rest. Talk to each other," Dubey said after his house cleared out. "Make sure you take care of that mental health, strength, so we can go out there and continue to go out there to rise peacefully with intelligence and make a solid argument. I love you guys."

Protests have been raging across the country over the killing of George Floyd, a 46-year-old Black man who died after a white police officer kneeled on his neck for several minutes in Minneapolis, Minnesota.