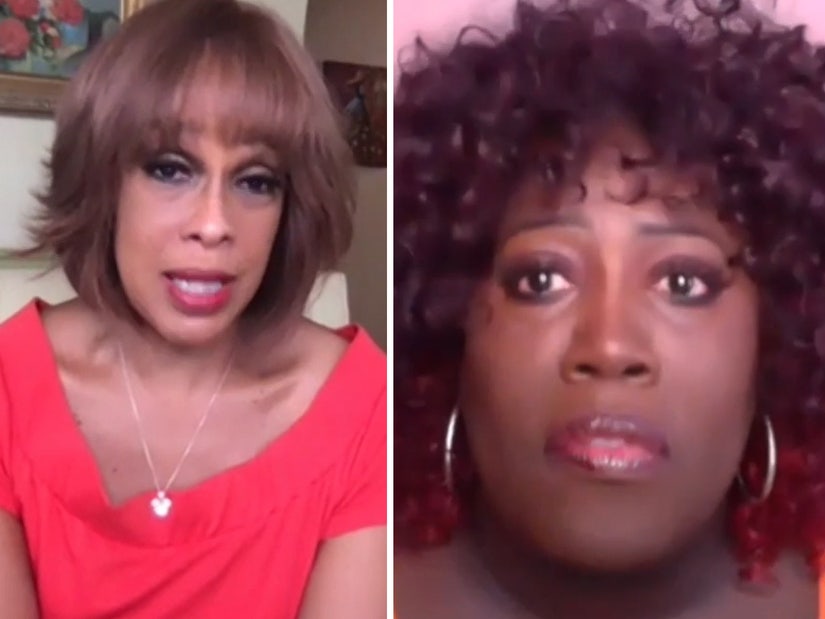 The news anchor was also praised by the women of "The Talk" for showing emotion on air during George Floyd coverage.

When the video of George Floyd's killing first hit the news last week, it happened the same day Amy Cooper -- aka Central Park Karen -- went viral for calling the cops on a Black man who told her to leash her dog. The back-to-back stories were too much for Gayle King, who was visibly emotional during the CBS This Morning broadcast.

As she stopped by "The Talk" on Thursday, King was praised by Sheryl Underwood for showing emotion and for being "a respected voice in this country and in this field."

"You are a person who also has feelings. I believe you are in the legacy of great news anchors," said Underwood. "You can show emotion just like Walter Cronkite showed emotion when John F. Kennedy was assassinated. You are not a robot. You’re an American and human being and you have feelings, and God bless you for showing that. If Walter Cronkite can do it, so can you!"

King became emotional again as she explained why that day was such an overwhelming one for her.

"It brings back memories of that day, because at the time we didn't even know his name," she said after watching a clip of her broadcast back. "We couldn't even give him the dignity of his name. He was just a Black man underneath a car. And all we had seen was the knee on this neck and that was hard enough to see."

"So, you go from that story to a block later, about the Central Park woman who called police about an African American man who we all saw was not threatening her or her dog," she continued. "She was practically strangling the dog to call the police about something that wasn't true and when you think about it, if it had gone another way, that man, the bird watcher, could have been George Floyd. That's really affecting me. And we've learned so much about this story ... I think that's what bothered me."

She also said Floyd's last words, calling out for his mother, also really hit her. "This is what's getting me, it goes to the primal instinct that we all have, because your mother is your ultimate protector and his mother died two years ago," she added.

As her appearance continued, Marie Osmond wondered what the conversations were like for King and her two children, son William and daughter Kirby. Saying both of them are in Los Angeles, King revealed they all had a late-night phone call over the weekend because none of them could sleep.

"My son is 33 years old, and I'm worried about him, saying, 'Will, please don't walk Scott [his dog], please don't take him for long walks, everything is so volatile,'" she explained. "He lives in the Santa Monica area, close to there, so he could hear the police choppers and he could hear the sounds of the city. And Santa Monica, as you know, is a very affluent town. I'm worried about him walking his friggin' dog and he's 33."

"I worry a lot about his safety," she added, "People will say to you, Sharon, to be honest with you, welcome to being Black in America. This is not new. But we are more amped up."

"I've had more white people reaching out saying, 'How are you doing?" Well, not good," she continued. "The correct answer is nobody should be doing good right now. I think white people are viewing this as like, 'Holy cow, this happens this way? This happens in this country?' Yeah, it does."

On Friday, Derek Chauvin was arrested after video captured him with his knee on Floyd's neck for more than eight minutes during Floyd's arrest for allegedly passing a counterfeit $20 bill. Floyd was unresponsive when paramedics arrived and was later pronounced dead.