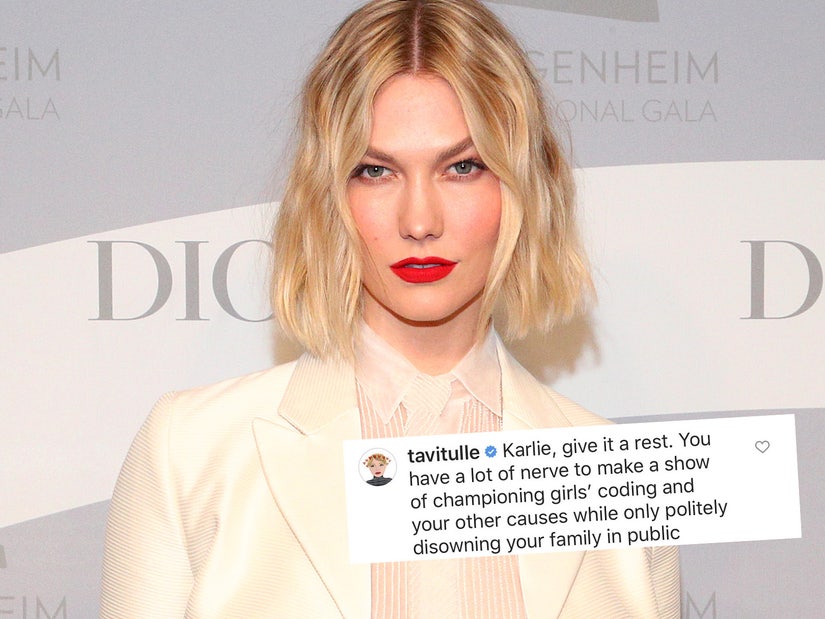 Karlie Kloss was taken to task for posting about "healing racism" in one's own family as critics suggested it was a hypocritical move because Karlie is Ivanka Trump's sister-in-law.

The model -- who wed Jared Kusher's brother, Josh -- shared Cleo Wade's quote recently on Instagram, which read, "The world will say to you: We need to end racism. Start by healing it in your own family."

Actress and writer, Tavi Gevinson, took to Karlie's comment section to show her disapproval by writing, "Karlie, give it a rest."

Then Tavi really went to town.

"You have a lot of nerve to make a show of championing girls’ coding and your other causes while only politely disowning your family in public (lmao @ you ignoring ivanka on social media; she still went to your wedding)," the 24-year-old continued.

"I can't believe you're not more embarrassed not just by them but YOUR decision to only publicly disown their politics in polite ways so you can have it both ways."

Tavi wasn't done just yet throwing the shade as she continued, "I don't know what kinds of conversations you have behind the scenes (besides when Jared asked your dad to solicit solutions to a global pandemic in a Facebook group back in March 😂) but like... what am I looking at. This is a f--king joke."

Other commentators were quick to agree with Tavi as one wrote, "She thinks if she pretends hard enough people will forget her family ties," and another shared, "I'm sure you have ALOT to say at your next family dinner lol."

Karlie did, however, have some support, as one follower posted, "Oh please, she's a democrat who with her husband has critiqued the other side of her family tree. Let's not nit pick at our allies who are actually trying to make change happen and alienate them by telling them that their actions are not good enough, every little bit helps."

TooFab has contacted Karlie Kloss regarding the criticism.

Last year, Karlie spoke with Vogue about her Trump family ties, saying, "It's been hard. But I choose to focus on the values that I share with my husband, and those are the same liberal values that I was raised with and that have guided me throughout my life."