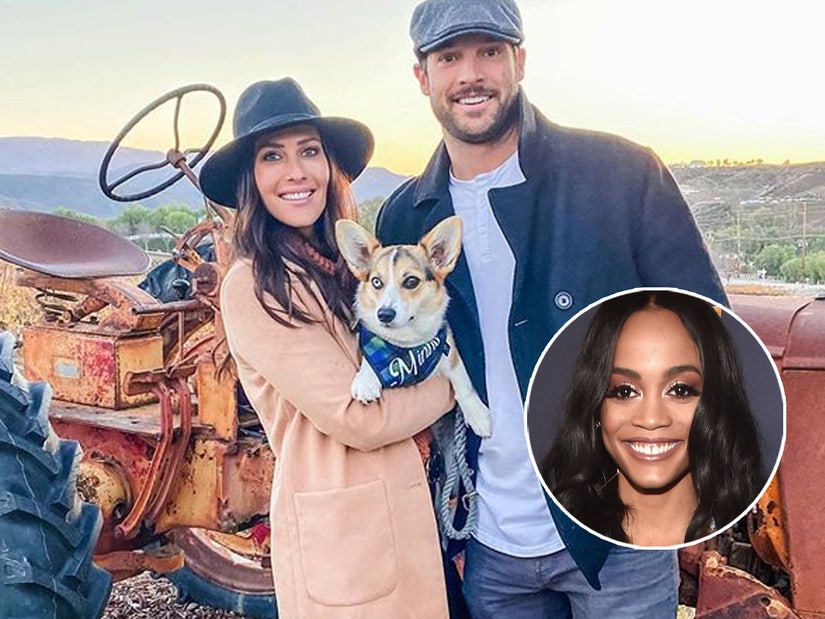 "I don't think he meant it in a malicious way, I do think it was tone deaf and it was the wrong time and message and sentiment."

Becca Kufrin is speaking out about the controversy surrounding her fiancé Garrett Yrigoyen's post about police.

Speaking with fellow Bachelorette Rachel Lindsay on Tuesday's episode of their "Bachelor Happy Hour" podcast, Kufrin, 30, broke her silence on the controversy, revealing she doesn't agree with Yrigoyen's stance on the issue.

"Garrett is my fiancé and I love him and to his core, I believe that he is a good person," Kufrin said. "What he posted ... I don't align with and I don't agree with."

"I don't think he meant it in a malicious way, I do think it was tone deaf and it was the wrong time and message and sentiment," she continued. "I'm trying to get him to see the bigger picture."

Amid the ongoing protests against racial injustice and police brutality in the wake of George Floyd's death, Yrigoyen, 31, came under fire last week after he posted a photo of "Thin Blue Line," a symbol that signifies support for police officers. Though Kufrin said she disagrees with Yrigoyen's message, she appeared to defend her man, claiming his "buddy's partner got shot in the back of the head during one of these riots, so he wanted to stand by the cops too."

Lindsay, who is the first and only woman of color to be the Bachelorette, weighed in on the controversy. The reality star not only expressed her disapproval of Yrigoyen's post, but also pointed out that it wasn't "an isolated incident." (For those who don't know, Yriyogen, who starred on Kufrin's season of "The Bachelorette" in 2018, was criticized after he liked memes that mocked Parkland shooting survivor David Hogg, the transgender community, feminists, and immigrants.)

"As a black woman," Lindsay began, "it is very important for me to tell you how Garrett's post made me feel. This is not an isolated accident with Garrett’s behavior and I never spoke about what Garrett did during your season. I never spoke about it and it was out of respect for you and your relationship."

"To me, this is what Garrett thinks, this is what Garrett is," Lindsay continued. "He posted a black box. He never said 'black lives matter.' He posted fists of every color, which to me is like, 'Everybody, all lives.' And then the very next post is the 'thin blue line' with a heartfelt, thought-out caption that he said with his chest. And to me, that is what you feel, and that is what you believe. I don't think Garrett is malicious, but Garrett is what the problem is."

After Kufrin went on to say that Yrigoyen's post wasn't "malicious," Lindsay became emotional as she continued to explain how the photo made her feel.

"I don't understand why people are just now getting it," Lindsay said. "We've f--king been going through this shit. I don’t understand why you say, 'It wasn't malicious' or 'I'm just now understanding things.' You have to admit that you made a choice to not see it. … A message what Garrett posted totally contradicts the movement that we’re trying to push forward. And to see so many people ‘like’ it … the thinking that Garrett has is a bigger problem."

"The problem is the people who don't realize what they're doing is a form of racism, the problem is people who are putting things out there against the movement and the problem is doing things that perpetuate and play into a particular behavior, which is what I have an issue with the Bachelor franchise," she continued. "Garrett's post is the problem and the thinking that went into it. You don’t think black people have law enforcement in their family? … It’s very selfish and it is your white privilege to think that that is the message that you need to put out when black people are just suffering in such a huge way in this country."

Lindsay wasn't the only one of Kufrin's famous friends to criticize Yrigoyen. After a disagreement with Kufrin's pal and Bachelor Nation's Bekah Martinez over the pro-police post Yrigoyen said Martinez was "no longer invited over" to their home.

Kufrin, who starred as Season 14's Bachelorette, continued to discuss the issue in an Instagram caption about the episode, calling her conversation with Lindsay as "the hardest, most uncomfortable, but important ones" she's had.

"This is really effing hard. As it should be. I will be the first to admit that listening to this back, I came up short. Very short," Kufrin wrote. "I listen to this & wish I had said more, wish I could have expressed myself better, wish I could have given so much more than I did. I think to myself ‘I didn't ask the right questions,' ‘I threw out the incorrect phrases,' ‘I didn't defend my fiancé,' ‘why couldn't I back up my thought process better?' The list goes on & on."

"So where do I go from here? I can't re-record this episode," she continued. "I can't go back & change my words (or lack there of). I can only try to move forward with what I believe is right, how to accept, be patient, & show care to others -- especially for those who are hurting most right now."

Read more of Kufrin's thoughts in her post, below.