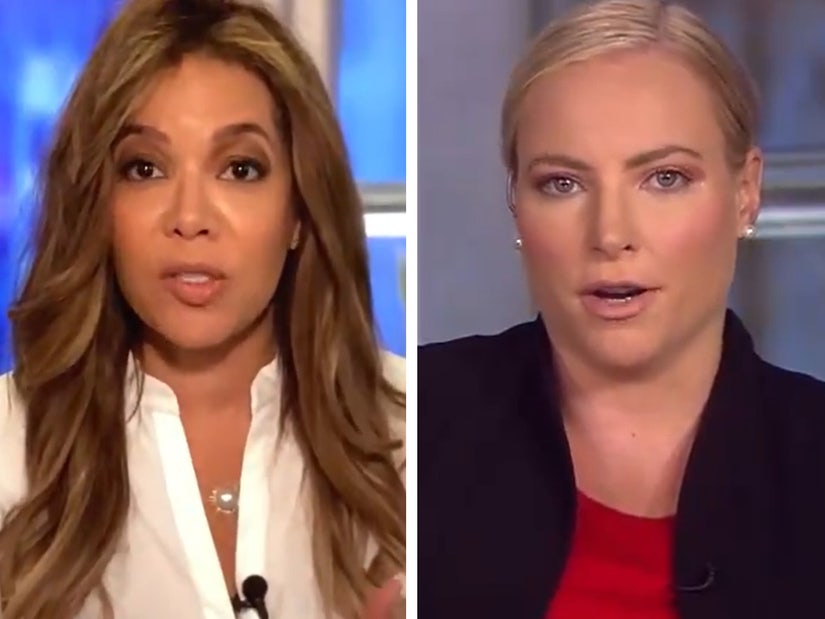 As McCain explains the confusion around the movement, Sunny breaks down what it all really means.

The "Defund the Police" movement continued to be a Hot Topic on "The View" on Tuesday, after Meghan McCain got some blowback for her conversation with Senator Kamala Harris about the subject the day before.

While McCain previously said she's all for police reform, she apparently struggled to understand the difference between reforming, defunding or disbanding police departments as a means to combat police brutality. Today, she explained one of her biggest issues with the "Defund the Police" movement is its name.

“If you’re explaining, you’re losing, and there’s a lot of explaining going on,” @MeghanMcCain says of the defund the police movement. “If you mean reform, say reform. If you mean defund, say defund. People are confused.”

“This is giving Trump a great campaign slogan.” pic.twitter.com/BQQbegMLkC

"If you were to hire me to advise you to run for office, there are a few tenants of politics that have not changed. One of them is if you're explaining, you're losing and there's a lot of explaining going on on this," she said on Tuesday. "I will tell you, if you mean 'Reform,' say 'Reform.' If you mean 'Defund,' say 'Defund,' people are confused."

She then pointed to Democratic Rep. Ilhan Omar calling for the "complete" dismantling of the Minneapolis police department following George Floyd's death. Omar, however, isn't pushing just for defunding or reform -- she wants the force dismantled.

"When Americans hear that I don't know what interpretation there is to this," added McCain. "Joy, you don't like things being weaponized in politics for a term, but this is giving Trump a really great campaign slogan."

Saying she understood and heard "loud and clear" what her cohosts were saying about the differences between the three calls to action, McCain told Democrats they needed to be "real crystal clear" on their messaging.

"Listen, you guys can spin and say everything you want," she told her cohosts. "I know that politics, at the end of the day, is real simple and it is about slogans. Defund the Police is a great one for the Trump campaign."

.@Sunny Hostin breaks down what she says is the biggest misunderstanding of the movement to defund the police: “People think that defunding the police means abolishing the police and that’s not true.”

McCain's comments came after cohost Sunny Hostin broke down the different responses to combating police brutality in detail at the very top of the hour.

"I think the biggest misunderstanding comes from those that aren't that familiar with law enforcement, because it's something I spent the majority of my career doing," said Hostin, a former federal prosecutor. "The biggest misunderstanding is that people think defunding the police means abolishing the police and that's not true. There are three different reactions to what you can do in terms of combating police brutality, especially police brutality in black and brown communities, because we know it's disproportionate."

She then explained that defunding means reallocating some of the police department's massive budget to "social services within communities," like ones focusing on mental health and education.

When it comes to disbanding police departments, she then pointed to the town of Camden, New Jersey, which disbanded and then rebuilt their department from the ground up 7 years ago.

Hostin then said the conversation around defunding the police isn't a new one and has been going on for decades. "This is not a new discussion and I'm surprised people are relegating it to a slogan, because that's not what this is about, it's about saving lives," she added.

Tuesday's conversation comes after McCain caught heat for her interview with Senator Kamala Harris the previous day. During the discussion, McCain appeared confused over the difference between reform, defund and disband.

She later tweeted, "It is not my job to explain the radical policies of the left most Americans are confused by," adding, "If 'defund' actually means 'reform,' why are you saying defund?"

"I think we should be having as many conversations as possible about real police reform and almost every American I know wants this, " she added, before addressing criticism head on. "I am never unprepared, ever, on our show. It's my job."

“DEFUNDING” VS. “REALLOCATING” FUNDS? As thousands turned out for George Floyd’s memorial and protests continue, calls to defund the police have taken center stage – the co-hosts weigh in on the meaning behind the term. https://t.co/wO4bvGgPgS pic.twitter.com/7tPxru5X1p