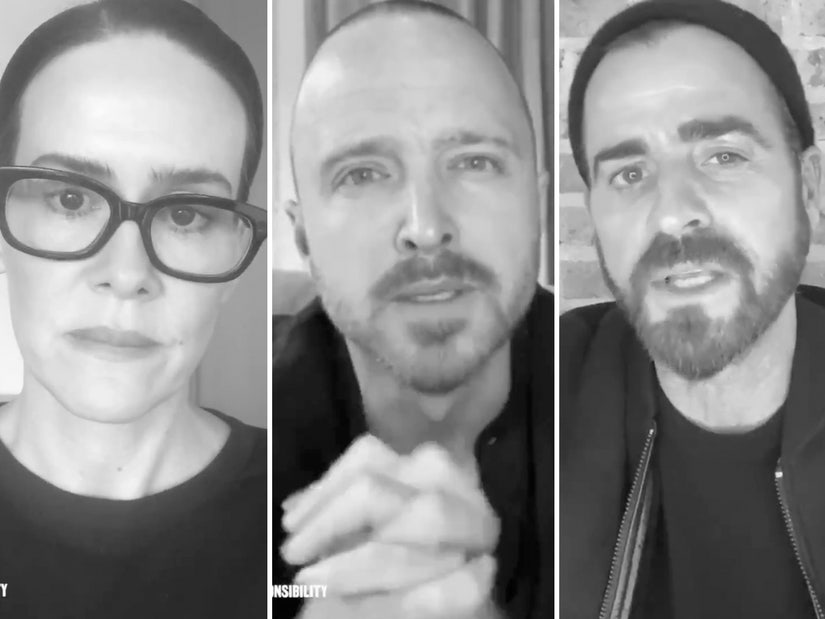 "Killer cops must be prosecuted, they are murderers," says Paul in the video, made in partnership with the NAACP.

A group of white celebrities took a vow to call out racism -- and hope the population at large follows their lead with the  #ITakeResponsibility campaign.

On Thursday, Confluential Films -- in partnership with the NAACP -- released a video showing "influential voices from the white community take responsibility for turning the racist tide in America."

They also call out the deaths of George Floyd, Breonna Taylor and Ahmaud Arbery and more victims of police brutality.

Below is a full transcript of the PSA's message:

Black people are being slaughtered in the streets, killed in their own homes. These are our brothers and sisters, our friends and family. We are done watching them die. We are no longer bystanders. We will not be idle. Enough is enough.

And killer cops must be prosecuted, they are murderers. We can turn the tide. It is time to take responsibility. Call out hate. Step up. And take action.

The I Take Responsibility campaign said they hope to "rally the white community" while encouraging education and action.

"This begins with white men and women taking responsibility for their personal role in eradicating racism in America," they said, "taking a stand and committing to change."

The campaign also hopes to bring awareness to other organizations, including The Bail Project, Campaign Zero, BLD PWR and Black Lives Matter.

The clip also sparked some negative reactions online -- much of it aimed at Aaron Paul, who began trending after it was released.

"lost it when Aaron Paul went full Jessie Pinkman at the end lmao," wrote one viewer in a tweet with almost 1k likes. "nothing is funnier than aaron paul in this clip going full walter killing his girlfriend voice at the end of this," added another.

"I love how a few of them went full Actor here," read another popular criticism.

Others, however, praised the video and wondered why there was backlash to it in the first place.