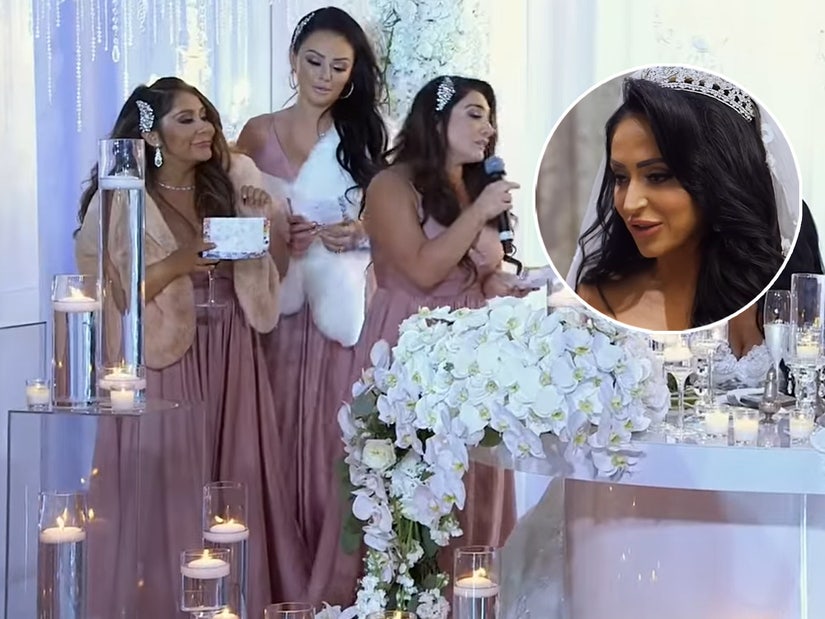 The moment we've all been waiting for has arrived -- here's what Deena, Jenni and Nicole really said during their big speech.

It's been seven months since Angelina Pivarnick tied the knot with Chris Langeira, but footage from the ceremony -- and its explosive reception -- didn't air until now.

On Thursday's new episode of "Jersey Shore: Family Vacation," viewers saw the two finally say "I do," but their marital bliss was short lived after a disastrous speech from her costars Jenni "JWoww" Farley, Nicole "Snooki" Polizzi and Deena Nicole Cortese. 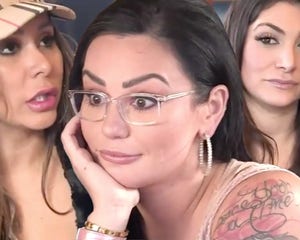 Before walking down the aisle, Pivarnick spent much of the episode expressing how happy she was to have the three women as bridesmaids, considering their often rocky past.

"It means so much for me to have these ladies by my side. We were not in a good place for so many years," she admitted in a confessional. "I changed so much, I think they've changed and I'm excited they're going to be up there when I get married."

She even gifted them custom wine bottles with "Never to be used as a weapon" labels, a nod to that one time Jenni did just that during one of their more fiery fights.

The wedding itself was a beautiful, albeit over the top, time. Chris cried seeing his future-wife walk down the aisle, Vinny -- who once hooked up with the bride -- did a fakeout objection to the marriage and everyone appeared to be enjoying themselves.

As the party moved to the reception, however, things took a turn.

The Maid of Honor and Best Man were the first to give their speeches, with Chris' friend ribbing Angelina by saying anyone who can deal with her has "gotta be a great man."

In a confessional, Jenni said she was nervous about public speaking and feared Angelina's psychic grandmother had put a hex on her. Seriously. As they then got up to give their speech, Deena told Angelina it was "good but funny."

"They said third time's a charm. You got engaged three times, but the third one stuck," Deena began. "You tried living with us three times and then you finally stayed. Not only is Chris the lucky one, but so are we. Angelina, you're the lice to my hair."

As Snooki then said, "You're the fly to our shit," Angelina exclaimed she "loved that."

"You are the trash to our bags," added Jenni. Again, Angelina reacted with nothing but love. 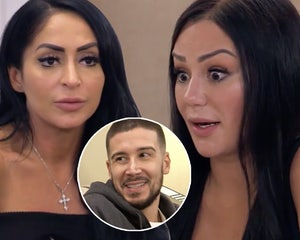 Jersey Shore Recap: Angelina and JWoww Hash Out 24 Drama, Before Vinny Gets Dragged Into It

"You're the throw up to our hangover," Nicole continued, before Jenni brought it home saying, "You are the dump to our island."

While all their comments were references to the show, the crowd was not feeling it. They all began booing the three women, as Jenni yelled, "Calm down, Staten Island!"

"Biggest fear just came full circle," JWoww added in a confessional. "It's the hex, it's upon me, it's real."

The episode ended with a "To be continued ..." slate, before footage from next week teased Angelina's incredibly angry reaction to the speech.

In the months since the actual wedding, Angelina has expressed forgiveness to her costars, letting everyone know she does have a sense of humor.

"As for my girls, we have been through worse and will not let a couple of jokes ruin what we have rebuilt over the last couple of years," she said on Instagram at the top of the season. "If you watch our show, you know we all roast each other. That's what family does." 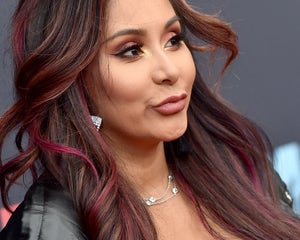 Snooki Quits Jersey Shore, Says She's Been Getting Death Threats: 'I Just Can't Do It Anymore'

It's unclear where all the women stand now, but Nicole announced her departure from the show shortly after the wedding speech initially made headlines.

"I don't like the narrative of anything, I'm removing myself, I love you guys so much," she said at the time. "I love my roomies to death, they know that, I'm not going anywhere when it comes to them and them being my family," she continued, adding that her exit doesn't mean she's done with TV or reality TV entirely.