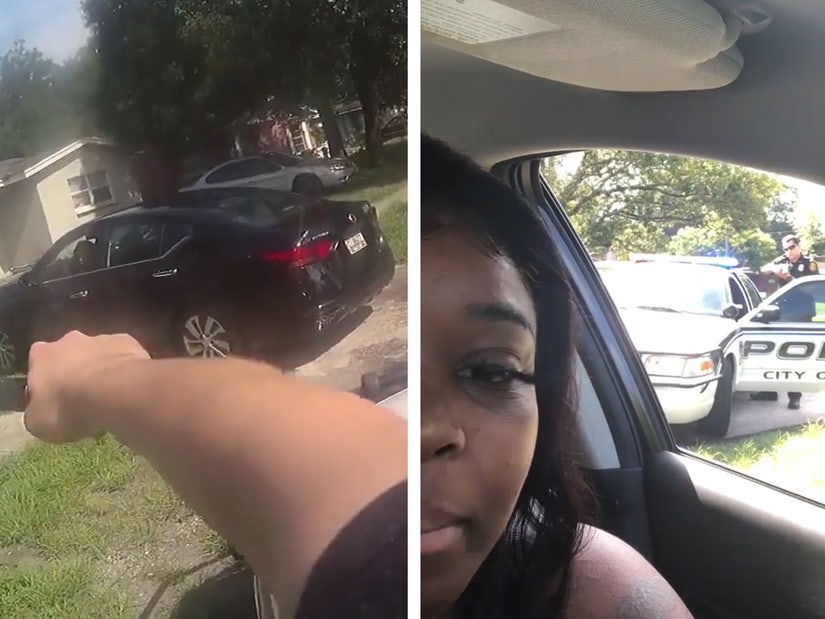 Joneshia Wilkerson was arrested on Tuesday for failure to return a leased vehicle and fraudulent use of a credit card.

The Tampa woman who posted a video of a police officer drawing a gun on her after she was pulled over in a stolen vehicle now faces charges of failure to return a leased vehicle and fraudulent use of a credit card, per police records.

Joneshia Wilkerson was arrested on Tuesday more than a month after the incident, which went viral after she posted it online and questioned why the officer was pointing a gun towards her.

At the time, Wilkerson told police she borrowed the car from a friend and did not know it was reported stolen.

The Hertz manager who rented Wilkerson the car identified her from the viral Instagram video and surveillance footage shows Wilkerson renting the car as well, according to the records.

Officers claim the driver's license used to rent the car was lent to Wilkerson for $200. The credit card number Wilkerson allegedly gave belonged to a person in Indiana who still has the original card.

Wilkerson's friend and passenger in the car the day of the original incident told WFLA News that she was surprised Wilkerson was arrested.

"I really thought someone else had stolen the car," Zephanesha Dillard stated. "I thought she was borrowing it. I didn't know any of that."

Dillard also revealed that she and Wilkerson had planned on suing Tampa Bay Police.

"I guess the lawsuit is done and over with cause the car turned out to be stolen and she was the one who did it," said Dillard.

Tampa Bay police released bodycam footage to show their own version of an incident that was also recorded and posted to social media by a Black woman who was pulled over.

The move comes as encounters with police and Black Americans have come under greater scrutiny following the deaths of George Floyd, Rayshard Brooks, and many others who have died at the hands of law enforcement.

On Friday, Joneshia Wilkerson, 25, shared a video to her Instagram account where she sat in a Nissan Altima while a cop held a gun pointed towards her direction for about five minutes before backup arrived.

TPD officer pointed a gun aiming directly at the head of a 23 year old unarmed innocent black woman, Joneshia Wilkerson after alleging she was driving a stolen vehicle.

"Y'all I got pulled over and this cop is literally pointing a gun at me. He still didn't put his gun down," she said in the one-minute clip. "Sir, can you at least put your gun down?"

In the caption, Wilkerson wrote, "I told him numerous times I can get out the car and I'm not arm yet he still pointed his gun at me I was scared and in fear with my life and he kept telling me to keep my hands on the wheels like he was gonna shoot and I kept telling him that my hands are up I never once lowered my hands!"

"The last thing I need is a gun pointed to my head," she added.

Tampa Bay authorities released the bodycam footage from the officer on Saturday in a news release to counter what they called a "false narrative" regarding the incident, per Tampa Bay Times.

"There is a post circulating on social media that misrepresents the facts of a recent felony traffic stop of an occupied stolen vehicle," read the statement.

The bodycam footage shows the officer pointing his weapon towards Wilkerson while he announces the car is reported stolen. Backup arrives and the officers handcuff Wilkerson, put her in the back seat of a patrol car and eventually release her without charges.

Police said the officer was correct in the way he handled a situation involving a stolen car.

"Stolen cars are quite often used -- to do a different type of crime whether you're going to rob someone, break into houses, it usually leads to more crime, other crimes," said Tampa Police Chief Brian Dugan on Monday, per the outlet. "That's why we take such caution when it comes to stolen cars."

“The officer put in his gun in a low ready where it's not pointed directly at the person but its already out and can be used and easily raised if they have to defend themselves," he added.

Wilkerson is a member of the U.S. Army and, according to law enforcement, borrowed the car from an acquaintance after returning from a recent deployment; she did not know it was reported stolen.

"The stolen vehicle was impounded," police said. "The occupants were not charged."

“Upon completing the investigation, the driver and passenger were released and appeared to understand the explanation provided by the officers,” police said in the news release.

Wilkerson, however, spoke with NBC News about the incident, saying she still felt the officer was in the wrong.

"I feel like something needs to happen to the Tampa PD officer who held that gun on me for four minutes. The Tampa PD, they are bullies, and the way they treat people is bad."

Watch both videos above.