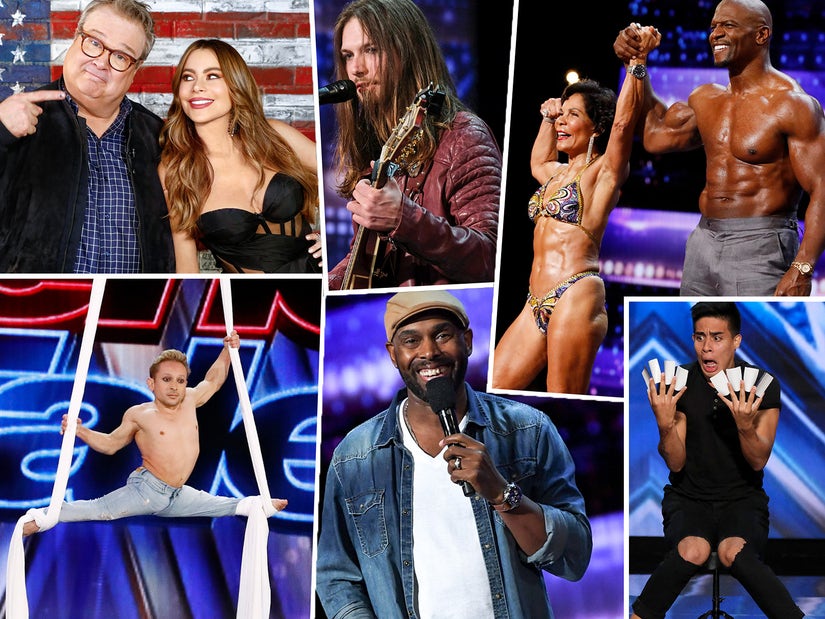 An inspirational aerialist and septuagenarian bodybuilder prove there are no limits to what can be accomplished with dedication, hard work and a dream.

As we move ever close to the strange COVID-19 transformation of "America's Got Talent," this week saw Eric Stonestreet stepping in for the sick Heidi Klum. Next week, the audience disappears as well.

It is rather remarkable that Sofia Vergara was able to so quickly call in a favor to get her "Modern Family" co-star to join the panel. As he laughed, he went from hanging out in his kitchen that morning to judging the biggest talent show on the planet. 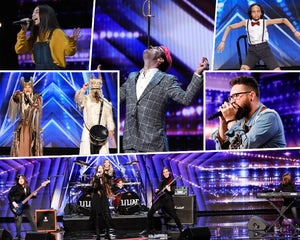 He was in for a wild ride right from the start, too, as his fellow judges quickly put him in the hot seat for some ... questionably talented acts. Honestly, the night seemed to swing from extremes. There were some inspirational and powerful acts and then there was a guy who snapped his fingers.

It's certainly going to be an eclectic show this season, though we did see some of the more traditional acts from magicians to singers, dancers and even a great stand-up comedian. But it was in the lesser-seen areas that tonight's show shined brightest.

On the one hand, we saw a 73-year-old bodybuilder who looked absolutely incredible. She was so filled with laughter and joy and served as an inspiration to anyone and everyone who thinks maybe their time has past.

Later, we met an aerialist performer who also happens to be a little person. He served as inspiration that the only limits in this world are the ones we buy into or place on ourselves. Where there's a dream and a will, there's a way.

He was objectively great at what he does, and we're still sobbing over watching his kids and wife see him do this for the first time ever. Add to that some authentic rock-and-roll and a woman with a powerful voice stepping into the spotlight for the first time after 25 years, and it was a night of tears.

For the purposes of this recap, if you only see three "Results," then that means those are acts that hit the stage before Eric joined the panel. As always, they are in the same order as the judges sit from Howie Mandel on the left to Simon Cowell on the right (from the stage).

Fair warning, since I'm safe at home, I'm probably going to be a little harsher than my colleagues Howie Mandel, Eric Stonestreet, Sofia Vergara, and Simon Cowell. But I might be nicer, too. Maybe.

(singer) We love his personality and charm. Then he started singing.

(bodybuilder) Not sure there's enough of an act here for a show like this, but we are suitably blown away by how fit and in shape Josefina is at 73 years old. She is living proof that there are virtually no limits to what we can accomplish if we set our minds to it. And she didn't start bodybuilding until she was 59. Also, we loved that Terry came out to pose and flex with her; the size difference alone was worth it!

(rapper) His real trick is literally popping his eyes out. As a rapper, he wasn't that great. Oh but that he were and this would have been quite the act, but his flow is slow and off the beat and lacks any dynamic tension. The eye-popping, though, was so startling and extreme it sent Sofia literally running and falling into the crowd, which was sadly more entertaining than Chef Boy Bonez.

(musical snapping) Look, there's really only so much you can do with this, right? And we kind of think he just did it.

(dancers) A crowd-pleaser for sure, this crew had some things going for it and some things against. The choreography was probaby their strongest element, with some cool moves. The problem is they did't hit consistently, together or hard. One guy in the back was painfully off through the first part to the point of distraction. Their stunts were rudimentary and sloppy, so while there is potential in their vision, they're just not executing to the level of that vision just yet. Eric was a reluctant yes as they split the panel.

(dancer) Lewis has kind of a reckless abandon to the way he moves, but there is also solid technique, strength and some killer aerial moves. With a more cohesive routine framed around what he can do and telling a story, he could be something really special. As a showcase, it proves that he's a great dancer who knows how to get a crowd motivated. He just needs to learn to better harness and control his energy to make it more artful.

(dancers) These guys just took bonebreaking to the next level. At times there was almost too much going on with all four of them so incredibly flexible and doing different things all at once. But they worked well together and it was mesmerizing wondering what stunt they were going to pull out next. That's how you keep a crowd entertained and on the edge of their seats.

(singer) What an interesting performance. Annie is 12 years old and she has a very young voice, which we seem to never see on these shows. And yet, she also has incredible control, tonal quality and range of that very young voice. We're so used to hearing singers with voices so mature for their age, but Annie totally is her age and yet she is masterfully so. Her stage presence grew just like her voice. It was refreshing in its youthfulness and impressive in its confidence.

(musician) When it comes to that authentic rocker vibe, Jesse is more than a pretty face (and he's definitely got that going for him). He had a great, energetic-yet-lowkey take on Lady Gaga's "Bad Romance," the perfect growl and the ability to caress the note he's looking for vocally in a way that we were hanging on his every utterance. It's a little theatrical to be sure, but some of the best rock of all time has been. We'd love to see what else he's got in there.

(magician) An act like we've never seen on the "AGT" stage, we loved how innovative and fresh Winston made card play feel. It was filled with so much drama from the music to his presentation and acting out the fear. This is how you get noticed and remembered on a show like this. It was a great first audition. If he can top this, he could go really far.

(silks aerialist) Aerial silks is incredibly difficult and dangerous, and Alan was absolutely fearless in tackling it. We also love what he stands for in that he comes from a performing background but because he's a little person, everyone thought he should be a clown. No, he followed this dream and honed his craft to near perfection. And we feel we've just scratched the surface of what he can do as an acrobat (the flips across the stage showed there's more). He's breaking expectations, but more importantly, he's great regardless of his stature, and so joyous in doing what he loves.

(singer) Shaquira has held back her talent for more than two decades over confidence issues and being put down for her size, but then she hit that stage like a seasoned professional with grit, growl and just a tremendous performance. As impressive as it was, you can actually see room in there for her to grow into something even more incredible. That's what raw talent, clear vision and taking a chance on yourself can do. She earned every bit of an incredible reaction.

(stand-up comedian) Stand-up is so hard in the short minutes comedians get on this stage, but Ty took advantage of every precious second. This set was focused on being in his 40s and what it's like to get older and how it can change your perspective. We loved how universal his material was. He had a very smooth, conversational delivery and a winning charm about his overall persona which had the audience with him from the jump.