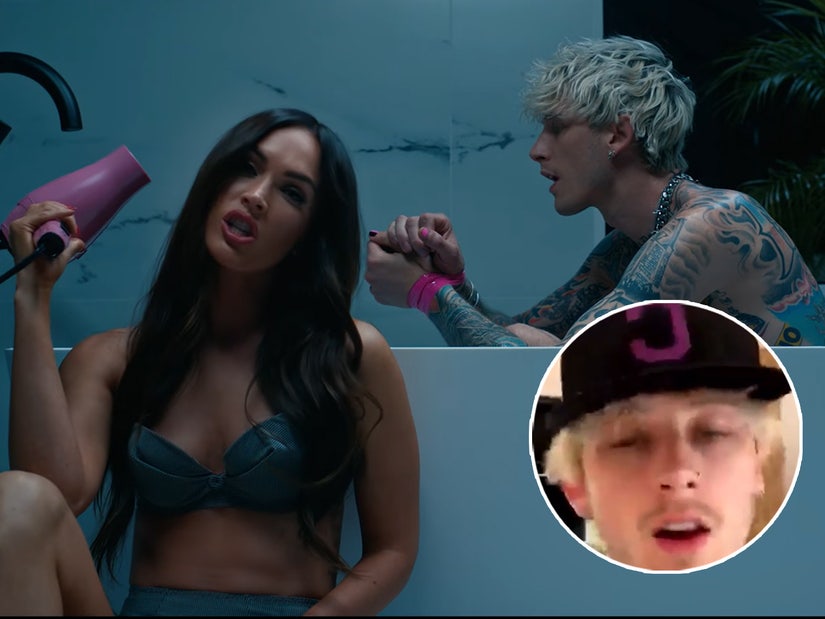 The rapper was caught off guard when Fox came up in an interview.

Megan Fox and Machine Gun Kelly appear very comfortable with each other -- but that doesn't mean he's necessarily comfortable talking about her just yet.

The rapper was a guest on RADIO.COM's FANDEMIC Instagram Live on Thursday, where eventually talk turned to his music video for "Bloody Valentine," which also features his now-girlfriend.

"What was it like working with Megan Fox in the 'Bloody Valentine' music video?" asked the host, reading a viewer question. It starts around the 14:30 mark below.

He didn't immediately know how to answer, smiling and laughing while taking a beat to think about how to respond. "Good work experience?" asked the host. "Great work experience," he said with a laugh.

"I was playing Megan a lot of the Tickets to My Downfall songs," he explained.

Fox and the rapper were first spotted together in May, days before her now-estranged husband Brian Austin Green confirmed they had separated. In his statement, Green even brought up her relationship with MGK.

"I've never met him, but Megan and I have talked about him," he wrote. "They're friends at this point, and from what she's expressed, he's a really nice, genuine guy, and I trust her judgment."

After her appearance in the video and multiple PDA paparazzi photos, MGK appeared to confirm she was his girlfriend by tweeting out some lyrics from "Bloody Valentine."

“i’m calling you girlfriend, what the fuck”

life imitated art on that one. ❤️🔪