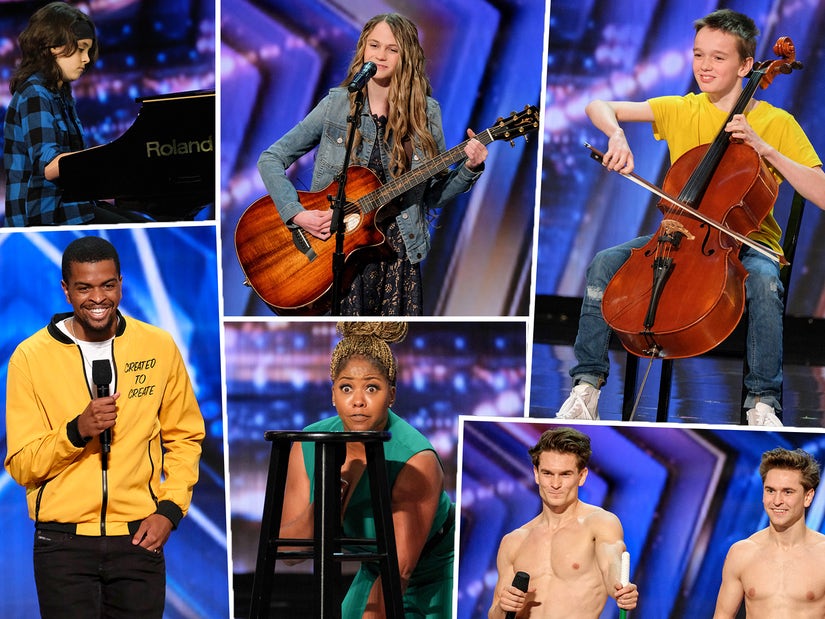 As "AGT" finally gets back into production, producers tease what fans can expect as the rest of this pandemic-interrupted season plays out in a whole new way over the summer.

"I had a nightmare I'd be like 90 years old doing this show and nobody'd be watching it," said Simon to an empty house. "Here we are."

COVID-19 has officially hit "America's Got Talent" as we hit the final episode produced before production was shut down. This was it for the auditions, and this last batch had to experience "AGT" like never before.

They had to perform with no audience ... and two of them were stand-up comics! It was a great test of their will and perseverance. It also proved to be an incredibly showcase for talent, as there were so many powerful and amazing moments throughout the night.

There was also a couple of acts that have left us scratching our heads, but as we rank these worst to first ... well, you'll be reading about those acts soon enough.

On the opposite end of the spectrum, "AGT" welcomed its first-ever spoken word artist and he was absolutely transcendent. We suspect that even had the theater been full, it would have been just as silent when he finished a beautiful presentation for his sister.

Finally, with Heidi Klum still under the weather, Sofia Vergara's "Modern Family" co-star Eric Stonestreet was still hanging out through most of these performances, though he did have to scoot at one point (or maybe it was just creative editing to make it look like he'd left before they were done). 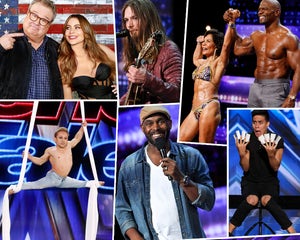 At the end, as "AGT" prepares to take next week off, we'll tell you what the production has in store from the rest of the summer as they're just getting back to work now. It's going to be unlike any season yet.

For the purposes of this recap, if you only see three "Results," then that means those are acts that hit the stage after Eric had to leave the panel (or was it before he joined?). As always, they are in the same order as the judges sit from Howie Mandel on the left to Simon Cowell on the right (from the stage).

Fair warning, since I'm safe at home, I'm probably going to be a little harsher than my colleagues Howie Mandel, Eric Stonestreet, Sofia Vergara, and Simon Cowell. But I might be nicer, too. Maybe.

(singing magicians) Well, the singing wasn't that great and the magic wasn't really magic. It was more like arts and crafts. This was kind of a disaster, but they're a cute, happy couple.

(acrobats) While we applaud the innovation of coming out like part of the stage crew, the act itself was just so-so (they couldn't even pull off balancing a broom on their head for more than a second or two). The guys had some creativity and fun ideas at play, but neither were nearly strong enough as acrobats or showmen to really pull off any of it.

(stand-up comedian) Michael has a fun enough delivery style, but his material was almost too generic. There was nothing fresh or original in it that we haven't heard before and his "getting older" jokes didn't really tell us much about who he is and what his point of view is. We connect to comedians for their personalities and their story. Relatability is important, but so is individuality. It was just okay for us.

(unicyclist) Truthfully, this feels a little limited. The jump rope and juggling tricks are fun while on a unicycle, but nothing that hasn't been seen before. Same with the higher and higher unicycles. But eventually, you kind of run out of material after this. It's fun and impressive for what he does, but we needed a little more to take us to the next level with him. He needs to up the danger.

(cheerleaders) When you put competitive cheer on a stage like this, it looks like so many acrobatic dance crews we've seen before like "AGT: Champions" winners V.Unbeatable. There are, of course, some signature cheer moves, but this is acrobatics and artistry and it looks so incredibly difficult. We'd have liked a little more sync in their movements and with those flips (yes, we know it's very hard), but this was definitely a crowd-pleasure ... had there been one.

(musicians) We weren't quite sure what to expect from a harmonica duo, but this original song had lots of pep and energy and while it held true to the signature sound of the instrument (how could it not?), it still managed to sound fresh and exciting. Their enthusiasm and passion for the instrument really created something actually kind of cool ... out of harmonics.

(singer) What a beautifully written song, Shevon has a real talent in that area for sure. On top of that, she delivered it with such sincerity and passion, you could see that it truly came from a place of finding strength in love. Her story may be touching and empowering and heartbreaking, but setting all of that aside, she is a gifted songwriter who delivered an unpolished gem. And it's definitely deserving of continuing her journey.

(cellist) The cello is not an easy instrument to play (and we would know!), but Elijah really poured himself into bringing Ariana Grande's "7 Rings" to the instrument. With its sampling of Julie Andrews' "My Favorite Things," the song is the perfect marriage of the more classical sound the instrument inspires and modern pop sensibilities. He was massaging the back half of the beat at times (intentionally, perhaps?) and his nerves came through in his playing early on, but for a young player, he's really setting himself up to be amazing as he continues to train.

(singer) Kenadi needs some polish on her vocals (and enunciation), but this was a rock-solid original and a powerful audition. We love that the song is her manifesting her country music dreams of a "One-Way Ticket to Tennessee," and we loved that her younger sister was there to see her perform it before she goes blind due to a genetic eye disease. Kenadi has a lot of interesting and cool qualities to her voice that serve her well, and she was smart in how she placed them throughout the song. This was a great introduction.

(stand-up comedian) First of all, Crystal was an adorable bunch of nerves up there. She has an infectious charm and her personality was shining through even before she brought the funny. And she did bring it, with a very entertaining and personal set about having a white friend (Becky) and a Black friend (Keisha) and the differences between them. Her set was personal and relatable and it helped us get to know her world a bit, which is what comedy should be about.

(musician) We were already blown away at how elegant and beautiful his original piano song was and then he added the surprise element of some rock solid drumming on top of it. It was like two auditions in one hinting at his diversity and artistry. At 12 years old, Jacob is incredibly poised, confident and, most importantly for this show, talented. We can't wait to see what else he can do.

(poet) The first-ever spoken word artist to hit the "AGT" stage, Brandon proved that this is an artform more than words on page. It is a story, a presentation, and a feeling just as you'd get from music or dance or any other form of self-expression. But it's heart is in the words and it is there that Brandon really proved himself. The poem was beautiful and heartbreaking. The presentation of that poem brought tears. He took his pain, he wrote it and he shared it and we felt it. That's art, and it's so amazing and wonderful that he gets to bring it to such a huge platform.

Production resumed last week outdoors, per Deadline, with the judges sitting socially distant from one another. To streamline the process as much as possible, the Judge Cuts round has been slashed from four episodes to just one. That airs July 28.

To make room for extra production time, the show is throwing in two special episodes along the way, too, including a "Best of Auditions" episode July 21 and a 15th anniversary special on August 4.

Then it's on to the Live Shows, expanded this season to four weeks with 44 acts total making it. Where and how they'll be shot is yet to be determined, as is whether or not a live audience will even be an option.

They did not say what's in store for its July 14 return (after a one-week hiatus), but there was footage of additional auditions (or perhaps a Wild Card round) being presented both live and remotely via digital media for the judges, so fans could be in for the most wild "AGT" experience yet.

"America's Got Talent" continues in two weeks on Tuesday at 8 p.m. ET on NBC.