"Wishing you so much love and a lifetime of happiness."

Victoria Beckham's says she "could not be happier" for her son Brooklyn's engagement.

On Saturday morning, the fashion designer reacted to the "exciting news" of her eldest son's proposal to his girlfriend, Nicola Peltz. 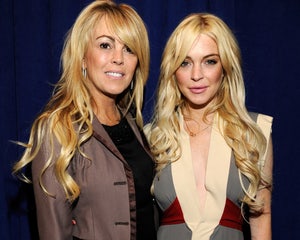 Victoria reposted the sweet photo Brooklyn, 21, had shared of himself and his new fiancee, 25, and wrote, "The MOST exciting news!! We could not be happier that @brooklynbeckham and @nicolaannepeltz are getting married!"

"Wishing you so much love and a lifetime of happiness 🙏🏻We all love you both so much x," she added, tagging her husband, David Beckham, their two other sons, Romeo, 17, Cruz, 15, and 8-year-old daughter, Harper.

Nicola, a model and actress, commented on her future mother-in-law's post, writing, "i love you so so much victoria i'm the luckiest girl."

Brooklyn and Nicola, who first went public with their romance back in January, announced their engagement on Saturday morning, confirming the recent reports that Brooklyn had popped the question.

"Two weeks ago I asked my soulmate to marry me and she said yes xx I am the luckiest man in the world," the aspiring photographer captioned the photo of himself with his bride-to-be. "I promise to be the best husband and the best daddy one day ❤️ I love you baby xx"

Nicola posted the same image, gushing over her fiance. The "Transformers" actress also revealed that Brooklyn's 8-year-old sister, Harper, had taken the pic.

"You've made me the luckiest girl in the world. I can't wait to spend the rest of my life by your side," wrote Nicola, who was reportedly wearing a dress designed by Victoria Beckham in the photo. "your love is the most precious gift. I love you so so much baby and thank you harper for this pic."

Romeo and Cruz took to their Instagram Story to celebrate their big brother's exciting news.