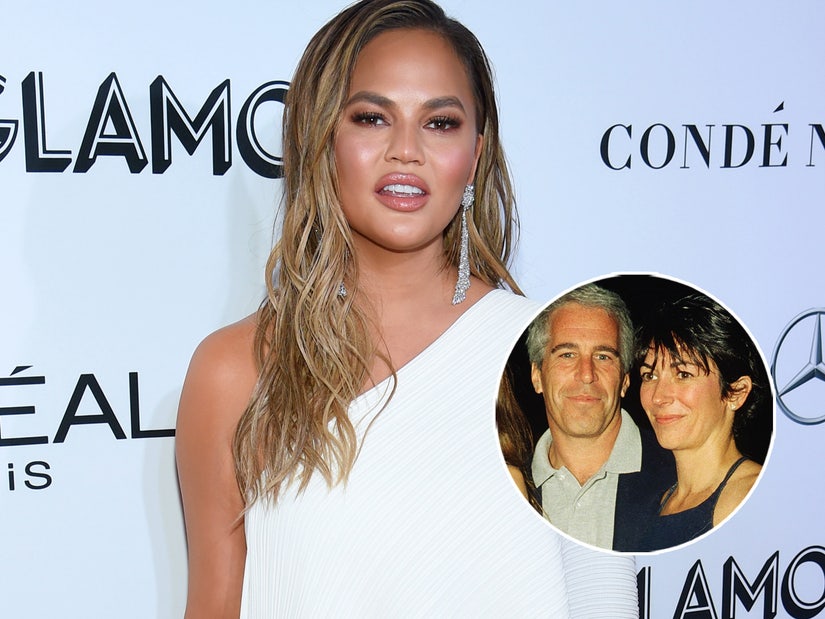 "And I am still flooded with sick psychopaths," the star posted.

Chrissy Teigen blocked more than one million people on Twitter after being targeted by online conspiracy theorists claiming she is connected to Jeffrey Epstein and Ghislaine Maxwell.

Accusations of Teigen being on Epstein's flight log and part of a pedophile ring have been renewed since the recent arrest of Maxwell and caused the mother-of-two to take action.

"I have block chained over one million people, ONE MILLION people today and I am still flooded with sick psychopaths," she tweeted late Tuesday night. "So please, spare me the 'just ignore them, they're just trolls."

The cookbook author then thanked her fans for helping her and gave a special shout out to journalist Yashar for his unwavering support.

"Anyhow I'll do my best to stop entertaining them. They have definitely been living for this and have zeroed in on ONLY me. Thank u to EVERYONE for helping me, in and out of the dm's. People I’ve never met have been so, so kind and huge thank you to @yashar especially."

She added, "Yashar has spent the entire day helping me, non stop. And sends me funny pictures. And lets me vent and cry. And gives me his therapists. I love you, man."

Chrissy Teigen found herself once again taking down trolls claiming she was connected to Jeffrey Epstein and Ghislaine Maxwell.

As interest in the late, convicted sex offender and his longtime partner has been renewed with Maxwell's recent arrest, Teigen has been on the receiving end of unfounded accusations saying she was on Epstein's flight log and, therefore, part of a pedophile ring.

The supermodel took to Twitter on Tuesday to defend herself as she revealed she is concerned that the online harassment won't cease even if her name is cleared once Maxwell is taken to court.

"When pedo ghislaine sings like a canary (if she doesn't die) and we have nothing to do eith [sic] this, I know for a fact it won't go away," the mother-of-two tweeted. "They'll just think of another excuse. It is extremely disheartening. I don't know how to stop this. i don't think anyone quite gets it."

when pedo ghislaine sings like a canary (if she doesn’t die) and we have nothing to do eith this, I know for a fact it won’t go away. They’ll just think of another excuse. It is extremely disheartening. I don’t know how to stop this. i don’t think anyone quite gets it

The latest backlash started when a Twitter user, Chrissie Mayr, accused Teigen of deleting thousands of tweets in the wake of Maxwell's arrest and claimed Teigen was on the Epstein flight log.

Teigen quickly clapped back, posting, "I actually deleted 60,000 tweets because I cannot f--king STAND you idiots anymore and I'm worried for my family. Finding me talking about toddlers and tiaras in 2013 and thinking you're some sort of f--king operative."

And when critics said Teigen doth protest too much, she tweeted, "This I don't get. everyone thinking I'm guilty because I'm defensive. You understand you are calling me a pedophile, correct?"

Last week, Teigen was in the same boat as she responded to a troll saying she was flying around with Epstein on his plane and is now playing the victim card.

I actually deleted 60,000 tweets because I cannot fucking STAND you idiots anymore and I’m worried for my family. Finding me talking about toddlers and tiaras in 2013 and thinking you’re some sort of fucking operative. https://t.co/isuEEW56fp

this I don’t get. everyone thinking I’m guilty because I’m defensive. You understand you are calling me a pedophile, correct? https://t.co/QgOyRgMmLi

"It is honestly a miracle I haven't blown myself up," she wrote.

"Why. Do these people. Pretend. He wasn't. Best friends. With Epstein. If you’re gonna take 'them' down, why not him too? Why. Are they. So f--king. Stupid. My brain hurts," she tweeted.

Fucking detectives that can’t even do simple subtraction to see how much was deleted. That’s who we are working with here.

every time I post food, some q anon loser asks if it contains baby. I'm honestly just gonna start posting things to drive them even more batshit insane. also like, was I on the island, do I eat babies, or just put them on my skin, or am a pedo?? like I'm everything? pick a lane.

And back in October of 2019, Teigen slammed an online follower who accused her and her husband, John Legend, of being on the flight log by posting, "You ask me this every day, multiple times a day and I'm going to say it one last time. Just for you: They AREN'T, you f--king weirdo. Why do you believe ANYTHING?,

He was accused of abusing dozens of underage girls at his homes in New York and Palm Beach, Florida, between 2002 and 2005.

On July 2, Maxwell was arrested in New Hampshire on multiple charges related to the sexual abuse of underage girls while allegedly conspiring with Epstein.