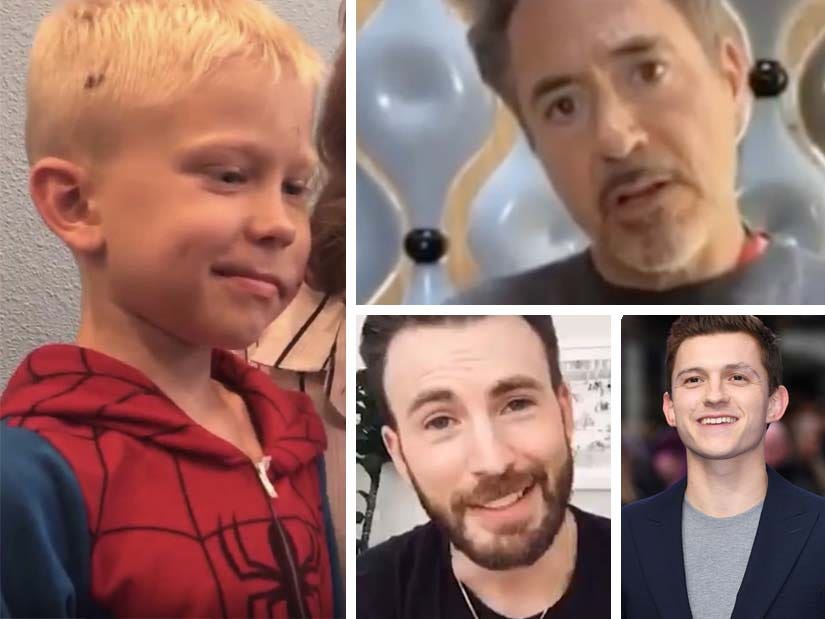 "You are more of man than many," Mark Ruffalo told the boy -- who also heard from his "friendly neighborhood idol."

Bridger's aunt shared the messages the young boy received from both Tom Holland and Robert Downey Jr. after his story went viral.

With Holland, Bridger -- wearing a Spider-Man costume -- actually had a phone call with the actor. In it, the kid revealed Spidey is his favorite Avenger and said he was actually watching "Homecoming" when he got the call.

Tom then told Bridger he could come to set when they finally get around to filming the next Spider-Man film, so he can get a look at the suit up close.

Bridger received a video message from Downey Jr., which was made possible thanks to the help of Brandon Davis at ComicBook.com

In the video, Downey called Bridger a "rock star" and tried to one up Chris Evans' shield gift by telling the boy to call him on his next birthday for a big surprise.

"That's a promise and a promise beats a shield," he joked.

As teased by 6-year-old Bridger Walker's aunt, Nikki Walker, the young hero did indeed hear from Captain America himself, Chris Evans. Even better, the "Avengers" star is giving the young man who saved his sister from a dog attack an incredible gift.

In a video shared to Aunt Nikki's Instagram page, Bridger can be seen watching a video message from Evans where the big-screen superhero told him, "I'm sure you've heard a lot of this over the last couple days, but let me be the next to tell you -- pal, you're a hero. What you did was so brave, so selfless, your sister is so lucky to have you as a big brother."

He went on to add, "I'm gonna send you an authentic Captain America shield because, pal, you deserve it."

"Keep being the man you are, we need people like you," Evans continued. "Hang in there. I know recovery might be tough, but based on what I've seen, I don't think there's much that can slow you down."

We'd be hard pressed to say who was more excited about the message, Bridger or his little sister, who quickly declared, "I thought it was awesome!"

A young boy in Cheyenne, Wyoming went viral this week after his aunt said he stopped a dog from attacking his even younger sister -- and got 90 stitches himself in the process.

As his story began to garner attention, a number of celebrities sent messages of encouragement and heaped praise on the boy.

Earlier this week, 6-year-old Bridger Walker's aunt, Nikki Walker, first shared his story on her Instagram page -- calling him "a hero who saved his little sister from an attacking dog."

"He, himself, took on the attack so that the dog wouldn't get his sister," she said. "He later said, 'If someone was going to die, I thought it should be me' He got home from the hospital last night."

She then tagged a bunch of actors from the Avengers films, "so that they can learn about this latest addition to their ranks." She followed that post up with another update the next day, hoping Bridger's story could get more exposure so he could get "some words of encouragement from his favorite heroes."

She also shared more details of the attack, saying it went down on July 9 and Bridger intervened by "standing between [his sister] and a charging dog." She said he was bit several times on the face and head, grabbed his sister's hand and ran. He got 90 stitches and is "finally resting at home," according to Nikki.

"His wounds are looking so much better! He's in great spirits, and his awesome personality is intact," she added. "He can't smile too widely yet, but he was grinning as I read some of your comments to him. I'd also like to mention here that the dog’s owners are really great people who have been nothing but kind to Bridger and his family."

She said the family feels "no resentment toward" the dog's owner at all -- and "if anything, there's only been an increase of love between our families as a result of this incident."

At least one of the Avengers left a comment on Nikki's post, as Mark Ruffalo -- aka The Incredible Hulk -- wrote, "Dear Bridger, I just read about what happened to you and I wanted to reach out to say this ... People who put the well beings of others in front of themselves are the most heroic and thoughtful people I know."

"I truly respect and admire your courage and your heart," he continued. "Real courage isn't dominating people or fighting against people or walking around like a tough guy. Real courage is knowing what is right to do and doing it even when it might end up hurting you somehow. You are more of man than many, many I have seen or known. With Admiration ... Mark Ruffalo (Bruce Banner/Hulk/Professor)."

On Wednesday, Nikki shared a photo of Bridger in a Spider-Man costume, as she revealed two other stars -- who she didn't name but were likely Tom Holland and Chris Evans -- had reached out.

"We just got off a call with a friendly neighborhood idol. (Pic is of Bridger’s reaction right after the call.)," she captioned the photo, likely referring to Holland's Spider-Man. "Bridger is over the moon!"

"Can't wait to show him what's next: a message from some guy who doesn't like bullies," she added, probably a reference to Evans and his portrayal of Captain America. "Gotta wait for the stardust to clear from his eyes first, though. Mission accomplished, everyone! We can't thank you enough."

Octavia Spencer also commented on one of Nikki's posts, writing, "I'm not an avenger but I know and appreciate them as I appreciate your little hero. Angel hugs for you."

Anne Hathaway shared Bridger's story on her page as well, captioning her post, "I’m not an Avenger, but I know a superhero when I see one. I can only hope I’m half as brave in my life as you are in yours, Bridger. Wishing you an easeful recovery, and many cool looking rocks. "

As the praise kept coming, Nikki said the family has received inquires about a GoFundMe -- but they instead asked for people to donate to The Wounded Warrior Project and Mission 22, a pair of support groups for veterans.

On Facebook, Bridger's father shared Nikki's post and exclaimed how there was "So much love for my little buddy!"

He also posted a video from LDS Church leader Dieter F. Uchtdorf about being the hero of your own story. "Love this! With our own family ordeal this last week, it has hit so close to home," wrote Bridger's dad.

TooFab has reached out to Nikki, as well as Bridger's parents via social media for comment.

Police in Cheyenne, WY told TooFab they had nothing in their system regarding animal attacks on or around July 7. The Laramie County Sheriff's Department wasn't immediately available for comment.