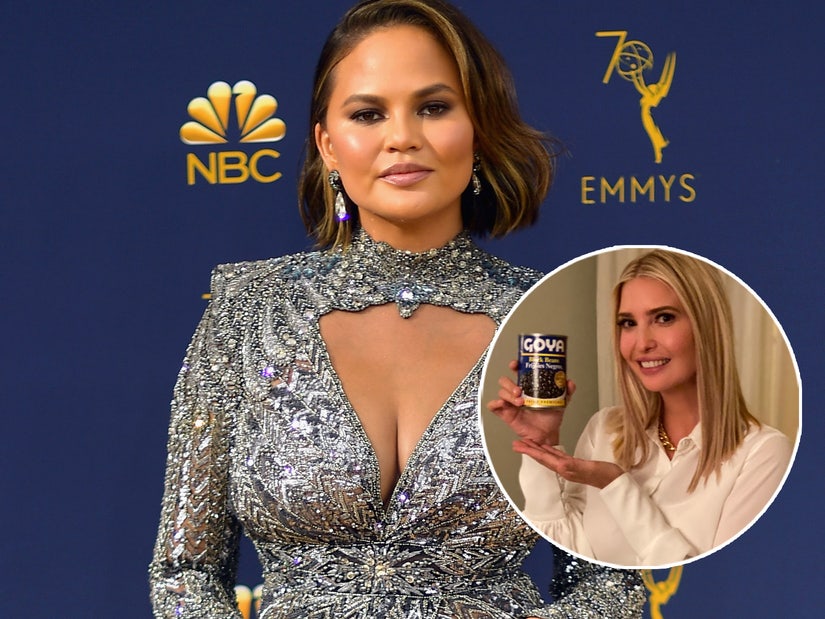 Ivanka came under fire for promoting a private business, as Chrissy asked, "Is this even ethically ok or legal??"

Chrissy Teigen took some time out of her busy day of deleting one million people on Twitter to slam Ivanka Trump.

The cookbook author weighed in after the President's daughter posted a picture of herself holding a can of Goya beans with the caption, "If it's Goya, it has to be good," in the wake of boycott calls for the Hispanic-owned company after its CEO praised Donald Trump.

The online promotion put Trump in the hot seat as she was criticized for using her position as a White House advisor to endorse a private business.

"Had it with anyone who EVER defends this woman or puts her as the 'sane' one in this family," Teigen posted on Tuesday night. "What a repulsive trolling of the people. also (in the SEA of illegal shit this family does) is this even ethically ok or legal??"

had it with anyone who EVER defends this woman or puts her as the "sane" one in this family. what a repulsive trolling of the people. also (in the SEA of illegal shit this family does) is this even ethically ok or legal?? https://t.co/M8GJajHlGS

Teigen's question appeared a valid one as "federal ethics laws prevent federal employees from using their positions to endorse any product, service or enterprise," per the Washington Post.

"Senior advisor to the President endorsing a product - using the company’s own advertising line. Ethics rules do not allow it - and pretty much unimaginable in previous administrations," tweeted MSNBC anchor Chris Jansing.

On Wednesday morning, however, White House spokeswoman Carolina Hurley said in a statement, "Only the media and the cancel culture movement would criticize Ivanka for showing her personal support for a company that has been unfairly mocked, boycotted and ridiculed for supporting this administration -- one that has consistently fought for and delivered for the Hispanic community."

She added, "Ivanka is proud of this strong, Hispanic-owned business with deep roots in the U.S. and has every right to express her personal support."

Trump's post comes almost a week after Goya CEO Robert Unanue spoke at the White House, saying, "We're all truly blessed at the same time to have a leader like President Trump, who is a builder."

The speech prompted a boycott of the food company as many in the Hispanic community found support of Trump to be misguided as he has depicted Mexicans as "criminals" and "rapists" while attempting to build a wall along the Mexican-U.S. border.

Teigen supported the boycott as well, tweeting at the time, "F-------CK. A shame. Don't care how good the beans taste though. Bye bye."