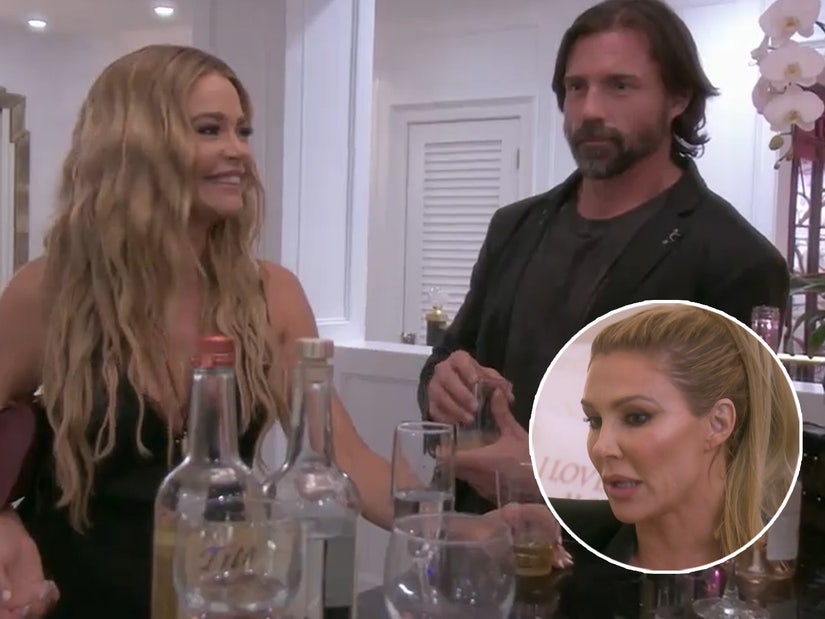 Glanville also warns the other Housewives that Richards is "not who she pretends to be."

On Wednesday's new episode, the two were seen reconnecting at an event hosted by Kyle Richards, as they joked about each other's boob jobs and sat beside each other during the auction. It was all innocent fun, but a preview for next week shows Brandi taking things to the next level.

After smacking Richards on the rear end, she's seen telling Denise and husband Aaron Phypers, "As much as you guys are co-dependentish and I like it, I wanna be a throuple with you guys."

Later in the same preview, Kyle says Denise likes "to run from the truth," as Brandi adds, "You guys need to be careful with her, because she's not who she pretends to be."

Obviously, we don't know what she's referring to here, but viewers know that, at some point this season, Brandi will claim she and Denise hooked up. A previous mid-season trailer showed Brandi exclaiming, "Denise and Aaron have this whole open thing. I f--ked her, woke up the next morning, she said, 'Aaron can never know this. He'll kill me.'"

ICYMI, the Denise-Brandi gossip began circulating in January, when The Daily Mail reported that the two had been seeing each other from early 2019 until the middle of the year. The report claimed Denise told Brandi she and her husband were in an "open marriage," but that apparently wasn't the case and Aaron was "hurt" by the news of the relationship.

While Richards' rep immediately denied the story and Denise herself has simply told viewers to stay tuned, Glanville kept fanning the flames on social media as new episodes have aired.

Most recently, she even shared a photo showing the two kissing.