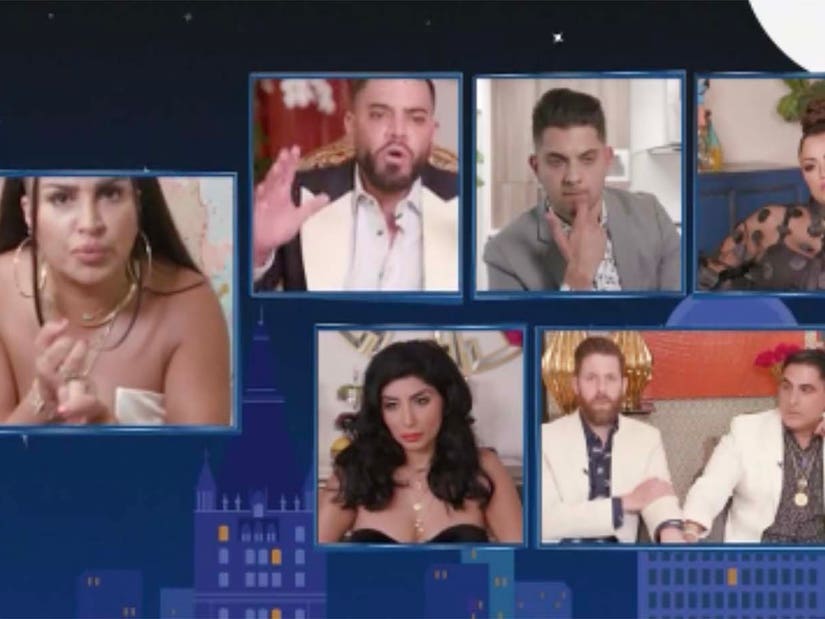 Adam joins Reza as Andy asks about his texts to Ali Ashouri -- and MJ shares her side of the story.

Ali Ashouri didn't appear on Sunday night's "Shahs of Sunset" reunion, but his claims about Reza Farahan's husband Adam Neely were the hot topic of the night.

Ashouri himself was barely mentioned, as most of the cast members referred to him as simply "the weasel," but the "Watch What Happens Live" reunion was filled with his allegations -- and everyone's reactions to them. 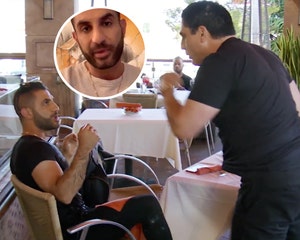 During the season, the so-called "weasel" claimed Adam sent sexual text messages to him and accused Reza's husband of playing "naked Jenga" with other men when Farahan was out of town. He relayed this info to Destiney Rose, who told Reza, leading to a sit-down between the three of them where Ashouri said he felt sexually harassed. MJ was later accused of setting this storyline into motion as an attack on Reza, using Ali and Destiney to do her dirty work.

On Sunday, Desitney was asked whether she started drinking more as the season progressed because she was hiding something about "naked Jenga."

"There's a lot that I know and knew and I had to keep my mouth shut, because first and foremost, I had a conversation with the only two people that mattered ... Reza and Adam," she said. "When I had to tell Reza exactly what was going on, in that moment, you will see on Reza's face, he knew exactly what was up."

Adam joined his husband, revealing the last time he saw MJ in person was July 5, 2019. When Destiney began saying she loved Reza and MJ's dynamic before their feud, Mercedes "intercepted" and wondered why Farahan never visited her in the hospital after she nearly died in childbirth.

"When my husband called and said I almost died, why didn't you show up to the hospital? she asked. "In the 30 years that we were friends, I don't believe you anymore. I don't believe that you cared about me for one day."

"You know what the real receipt is? They were trying to catch Adam on tape, they were trying to record him," Reza shot back, referring to MJ and Ali. "He was going to the same hairdresser that I go to, talking about wanting to be cast on Shahs of Sunset and how this is bigger than MJ put him up to it, this is about ratings. He's talking to my hairdresser, it was scary to me. I was feeling like he might be my stalker."

"Andy, my husband never sent any pictures of himself. Nothing about himself," he explained. "They were memes and GIFs, they were pornographic memes and GIFs, that's all that went out. [Ali] was trying to make himself relevant by saying he was harassed and that's why MJ and I fell out."

MJ said she "unfortunately" hadn't seen Ali since "this shit went down," causing raised eyebrows from Adam, before Mike Shouhed then wondered whether Adam's racy texts were simply misinterpreted.

"Adam was guilty of one thing and that was, he send out this really colorful texts," said Mike. "As a straight man, I don't take it as a pass, but sending it to another gay man, maybe it could be misunderstood." 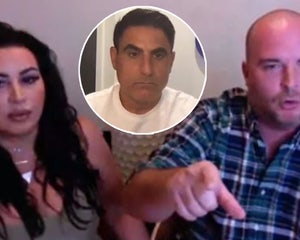 Adam then asked Andy, "as a gay man, do you know other gay men who are only friends who send each other funny text messages with GIFs that are kind of dirty?" Andy admitted that he, in fact, did.

Mike then told MJ she should have done more to shut up her so-called friend.

"When he had the platform, he started to embellish the story to make it more exciting. Then he kept adding to it," said Mike. "If you would have shut that shit down from the beginning and said shut the f--k up ... he would have never had the balls to come on the show."

While Mercedes said she was in the hospital clinging to life, Andy asked what that had to do with anything -- since Ali and MJ first talked about the Adam stuff long before she was hospitalized.

"Mute everybody until I get to talk!" she shouted, as Cohen claimed he did not have that power. Andy then asked everyone who believed MJ played a role in the naked Jenga rumors to raise their hand -- everyone, including MJ herself, did just that.

Cohen then wondered whether she instigated the gossip to "retaliate against Reza because of a contract dispute," something which she at first denied, before adding, "I'm more than happy to violate our Bravo contracts and break the 4th wall. I said I'll be back as soon as possible."

The episode ended with everyone shouting at each other as Reza said MJ "betrayed" him and Mercedes calling the entire reunion "a dog and pony show."

Expect this conversation to continue when Part 2 of the reunion airs next Sunday on Bravo. 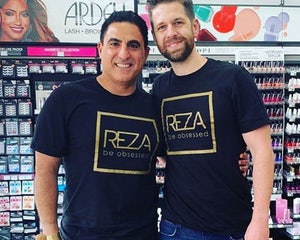