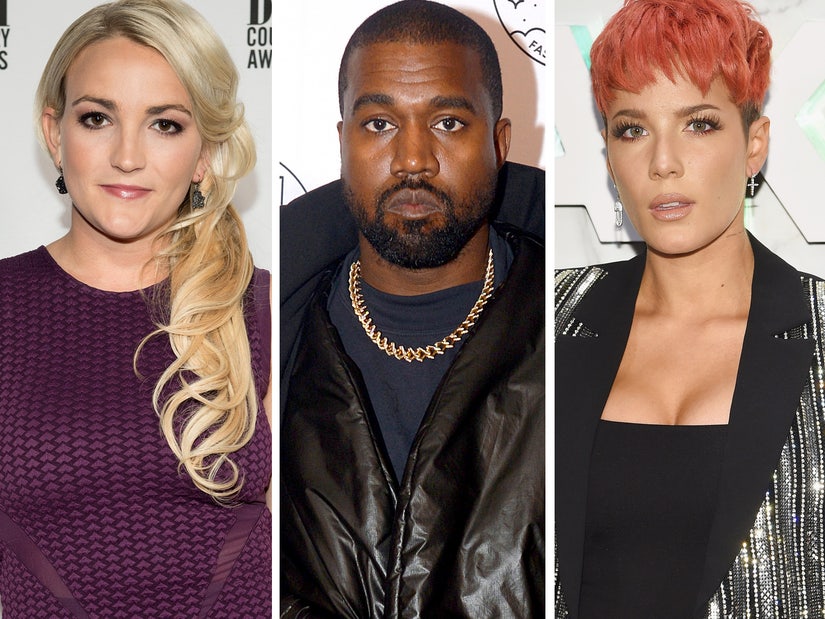 Spears pleads with her fans to "respect the situation with privacy for the person," while Dave Chappelle gives West a visit.

After Kanye West's tweets on Monday night were met with memes and ridicule on Twitter, a few celebrities sprung into action to urge their followers against doing the same.

Jamie Lynn Spears, Halsey, Demi Lovato, Kevin McHale and Maren Morris all spoke out on social media, after TMZ reported West is "in the middle of a serious mental health episode" related to bipolar disorder and is refusing the advice of friends, family or doctors.

Halsey -- who has been open about her own bipolar diagnosis -- had the most to say about the topic, sharing a thread in which she said you can still disagree with a person's beliefs or behavior without making their mental health the butt of a joke.

No jokes right now. I have dedicated my career to offering education and insight about bipolar disorder and I’m so disturbed by what I’m seeing. Personal opinions about someone aside, a manic episode isnt a joke. If you can’t offer understanding or sympathy, offer your silence.

A lot of people you know probably have bipolar disorder and you aren’t aware of it. Taking this opportunity to make offensive remarks and villify people with mental illnesses is really not the way to go...this is the exact triggering shit that causes people to keep quiet about it

you can hate someone’s actions or opinions without contributing to stigma that damages an entire community of sometimes vulnerable people all for a couple of laughs.

If you wanna think someone is an asshole, go ahead. Lots of people with mental illnesses are great. Lots of them are assholes. Because they are people. With nuanced personalities. But making jokes specifically targeted towards bipolar hurts more than the 1 person ur angry with.

Sincerely, Human Being with a Decade Long Bipolar Diagnosis.

The singer's response won praise from Spears, who shared one of Halsey's quotes to her own Instagram page.

The quote in question: "If you can't offer understanding or sympathy, offer your silence."

"If you deal with mental illness or care for someone dealing with mental illness, then you know how important it is to respect the situation with privacy for the person, and the family trying to protect their loved ones, no matter how it may appear to the public, and as the public we must learn to do the same," Spears wrote in the caption.

"I pray this doesn't bring shame to anyone dealing with mental illness, you are not alone, and you are loved," she added. "Sending all my love and prayers to all of you."

Jamie Lynn then hit back at someone who went into her comments to ask, "How about your sisters OBVIOUS mental illness? Why don't you speak on that?"

Her response: You have no right to assume anything about my sister, and I have NO right to speak about HER health and personal matters. She is a strong, badass, unstoppable woman, and that's the only thing that is OBVIOUS."

It would be nice if for once people can put down the meme making apps and pray for someone who’s struggling with mental illness. What happened to compassion?

"It would be nice if for once people can put down the meme making apps and pray for someone who's struggling with mental illness," she wrote. "What  happened to compassion?"

In a followup tweet, she added, "It's also amazing to me that people really think they actually know what some celebrities are going thru. Maybe take a step back and remember you don't know everything about everyone even if you do watch them on tv."

"It's easy to laugh and make jokes at something we don't personally have to confront," he wrote, "but it's also just as easy to have empathy for struggle because we all have had to confront that."

This is an opportunity for us to be better, to support and to hope a human being can get better. It's easy to laugh and make jokes at something we don't personally have to confront, but it's also just as easy to have empathy for struggle because we alll have had to confront that.

Added Maren Morris on her page, "Mental illness isn't f--king funny. Stop laughing at it and trending it like it's a joke."

On Monday night, West claimed his wife Kim Kardashian was "trying to fly to Wyoming with a doctor to lock me up like on the movie 'Get Out'" after he said she considered getting an abortion while pregnant with North during a campaign rally in South Carolina over the weekend.

He also appeared to take issue with the family living in Los Angeles and not Wyoming, where they own property.

So far, the Kardashians have remained quiet, but West claimed Tuesday that Dave Chappelle flew to Wyoming to check on him.

THANK YOU DAVE FOR HOPPING ON A JET TO COME SEE ME DOING WELL DAVE YOU ARE A GOD SEND AND A TRUE FRIEND ALL LOVE 🕊 pic.twitter.com/ddLA0E9eLK

"Brotherhood is real, love is real," said Chappelle in footage Kanye shared on Twitter, as West pleaded with him to say something to lift their spirits.

"An uplifting joke? You know I don't write them," he cracked. "That was it."

"Thanks for coming out and checking on me, bro," West told him before the clip ended.