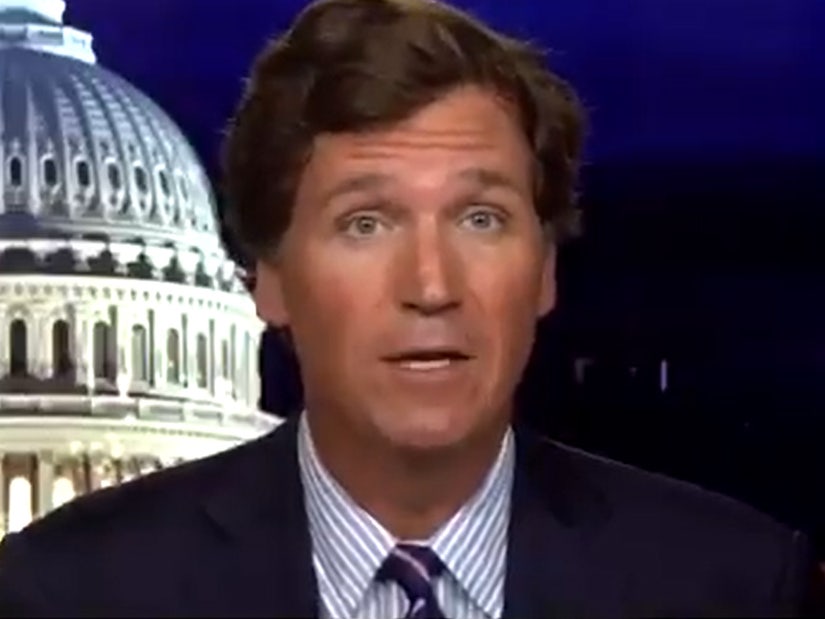 Followers then doxed the NYT reporter alleged to be working on the article.

Tucker Carlson accused the New York Times of planning to publish a story that would reveal his home address to the public.

During his closing comments on Monday's "Tucker Carlson Tonight," the conservative TV host claimed the publication wanted his program cancelled and that releasing the information would result in the endangerment of his family.

"So why is The New York Times doing a story on the location of my family's house? Well, you know why," Carlson said on air. "To hurt us, to injure my wife and kids so that I will shut up and stop disagreeing with them."

"They hate my politics. They want this show off the air," he continued. "If one of my children gets hurt because of a story they wrote, they won't consider it collateral damage. They know it's the whole point of the exercise: to inflict pain on our family, to terrorize us, to control what we say. That's the kind of people they are."

The New York Times issued a statement, saying they "do not plan to publish Tucker Carlson's residence, which Carlson was aware of before his broadcast tonight."

During the broadcast, Carlson recalled being doxxed two years prior, as he claimed a "left wing journalist" published his home address which resulted in "antifa" protesters vandalizing his home and threatening his wife.

The harassment caused the Carlson family to relocate.

.@nytimes does not plan to publish Tucker Carlson's residence, which Carlson was aware of before his broadcast tonight. pic.twitter.com/npg93Cdmbm

"But the New York Times followed us," Carlson continued. "Their story about where we live is slated to run in the paper this week. Editors there know exactly what will happen to my family when it does run."

Carlson went on to name the reporter who was allegedly working on the story as well as a photographer and editor at the New York Times.

"How would Murray Carpenter and his photographer, Tristan Spinski, feel if we told you where they live, if we put pictures of their homes on the air?" Carlson said as he shared a photo of Carpenter. "What if we published the home address of every one of the soulless, robot editors at the New York Times, who assigned and managed this incitement of violence against my family?"

"We could do that. We know who they are," he added.

They did not publish his address or anything even close to that. We all need to read articles before just retweeting things with our opinions, including Phillip Wegmann who is engaging in yellow journalism here. None of this hyperbole fro Tucker Carlson about NYT is true.

"Murray Carpenter is the one doing this to Tucker and his family. His email is below if you have something to say to him. We can do this under freedom of speech and make him famous," read one tweet.

Backlash against the Times continued to follow from conservative commentators as Meghan McCain tweeted, "This is extremely dangerous and a weird new norm. Even printing his neighborhood or building or home area is really dangerous. Why people feel comfortable doing this to people with whom their politics they hate is sick. It is the most violating thing in the entire world."

However, critics argued there was no proof of the alleged dox story and Carlson was simply using it to divert attention from recent controversies surrounding him, including the resignation of his head writer last week after he was linked to racist, misogynist and homophobic online accounts.

Carlson's broadcast also came hours after sexual misconduct allegations were made against him and other Fox News hosts in a lawsuit filed by a Fox News contributor.

Although Carlson made no mention of the lawsuit on Monday's show, Fox News released a statement to The Washington Post denying the claims.

"Based on the findings of a comprehensive independent investigation conducted by an outside law firm, including interviews with numerous eyewitnesses, we have determined that all of Cathy Areu’s claims against Fox News, including its management as well as its hosts Tucker Carlson, Sean Hannity and Howard Kurtz and its contributor Gianno Caldwell, are false, patently frivolous and utterly devoid of any merit."